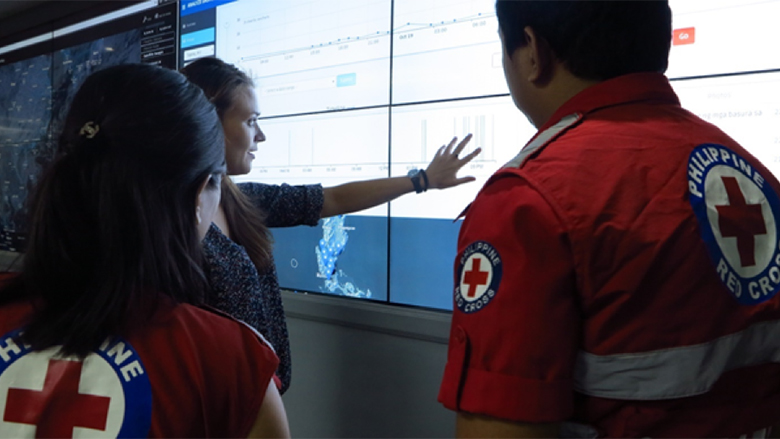 In drought-prone regions like the Sahel, a dry, sun-drenched part of Northern Africa that runs from the Atlantic Ocean to the Red Sea, the lack of water is a harsh and inescapable reality for millions. Increasingly dangerous, however, are sudden deluges of the very same precious resource. Flooding, a somewhat contradictory hazard for such a parched landscape, is increasing in frequency and intensity throughout the region, in large part due to the destabilizing effects of climate change. Over the last four decades, in fact, Sub-Saharan Africa has experienced more than one thousand disasters, many related to extreme weather. This increasing flood risk is compounded by the rapid unplanned urbanization and the lack of vital public infrastructure that lamentably characterize the region. Major flooding now afflicts the Sahel on a near-annual basis, destroying crops, washing away homes and livelihoods, and exacerbating water-borne diseases.

In spite of these growing impacts, it is still difficult for development agencies to justify investments in expensive weather monitoring systems, such as Doppler radar, which uses microwaves to determine the size and velocity of storm cells, that would enable more timely response and preventative measures. However, the World Bank-managed Global Facility for Disaster Reduction and Recovery (GFDRR) is working to catalyze new technologies in the field of disaster risk identification in order to bring down costs and build up resilience.

Last year, GFDRR and the UK’s Department for International Development (DFID) launched the Challenge Fund, a unique financing initiative aimed at harnessing innovation to provide cutting edge solutions in the field of disaster risk identification. After a single call for proposals, the Challenge Fund received hundreds of applications from teams all over the world. One team, the Institut de Recherche pour le Développement (IRD), had an interesting proposal to help weather services better monitor flood risk in the Sahel.

With the challenge of limited government funding and capacity, IRD’s proposal to take advantage of one of the public resources that African countries seem to ubiquitously enjoy—cell phone access—seemed especially attractive. Thanks to a phenomenon called path attenuation, in which the power of electromagnetic waves is diminished by reflecting or refracting off objects (such as raindrops), experts can now use the loss of cellular signal during weather events to accurately model rainfall patterns and predict the path of a storm.

As the cellular network grows, so too does the accuracy of the measurements, meaning this method is particularly suited to Africa’s densifying and cellular-heavy urban areas. Moreover, major cellular providers in the region of Ouagadougou, the capital city of Burkina Faso, agreed to provide this data for free for a pilot project facilitated by the IRD and other international partners. This project developed a flood early warning system for the authorities using cellular data from the towers.

" Flooding has become a major problem in Burkina Faso. Taking timely decisions to ensure the safety of the population is a serious responsibility. " 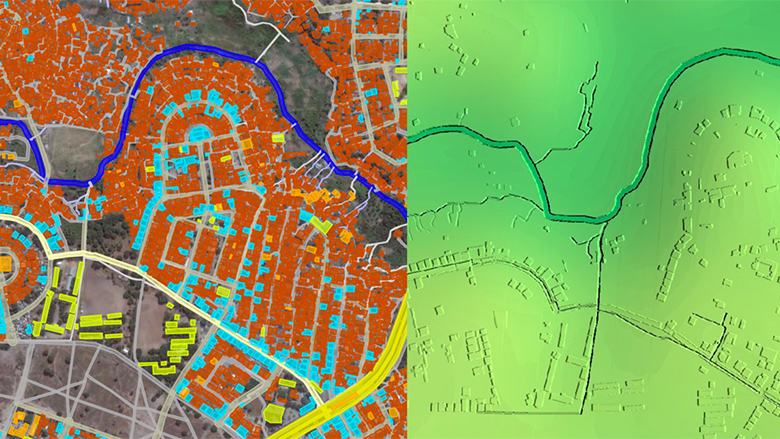 On the left, OpenStreetMap data shows structures and roadways. On the right, topographical data has been added, creating a digital terrain model suitable for flood modeling.

Participatory, or crowd-sourced, mapping is also being used in the region to boost flood preparedness measures. With financing from the Challenge Fund, a team at Deltares, a leading water research center in the Netherlands, recently worked to combine global data with crowd-sourced mapping data to create high resolution digital terrain models accurate enough for flood risk modeling at the street level. Risk information at this level of detail allows decision makers to assess which buildings and assets are at risk and what interventions will reduce risk. Another similarly funded project, led by FloodTags, is exploring the potential of social media to help build situational awareness for responders to flood emergencies, using natural language processing and Twitter posts to refine real-time flood models that can provide precious guidance to crews on the ground.

Efforts like these are just some of the 15 projects around the world supported by the Challenge Fund’s first round of financing, which awarded more than $1 million in targeted investments for innovative risk-reduction projects. Recently, the Challenge Fund received an ‘A+’ rating in DFID’s annual review of its SHEAR program, which aims to support improved disaster resilience and humanitarian response by advancing the monitoring, assessment, and prediction of natural hazards and risks across Sub-Saharan Africa and South Asia.

“The Challenge Fund has proven to be a great opportunity for organizations to access seed funding for pilot projects that contribute to a better understanding of disaster risk, and enable effective policies for more resilient communities,” says Alanna Simpson, Head of GFDRR’s Innovation Lab.

A second round of the Challenge Fund expands the effort to decrease disaster risk management costs and increase resilience by developing a framework that facilitates a multi-hazard view of risk. This effort will develop the first set of open and internally consistent data on multiple hazards, exposure, and vulnerability. Three consortia representing leaders in risk assessment will collaborate to develop the data framework. The initial focus will be on developing detailed data for Tanzania, with other efforts in countries such as Bangladesh, Kyrgyzstan, and Nepal, with the aim of enabling future multi-hazard impact and risk assessments.

As the impacts of climate change begin to take their toll on communities around the world, the Challenge Fund team and their partners hope success stories like these will attract more talent, and financial support to the task of disaster risk management, from Silicon Valley to the Sahel and beyond.