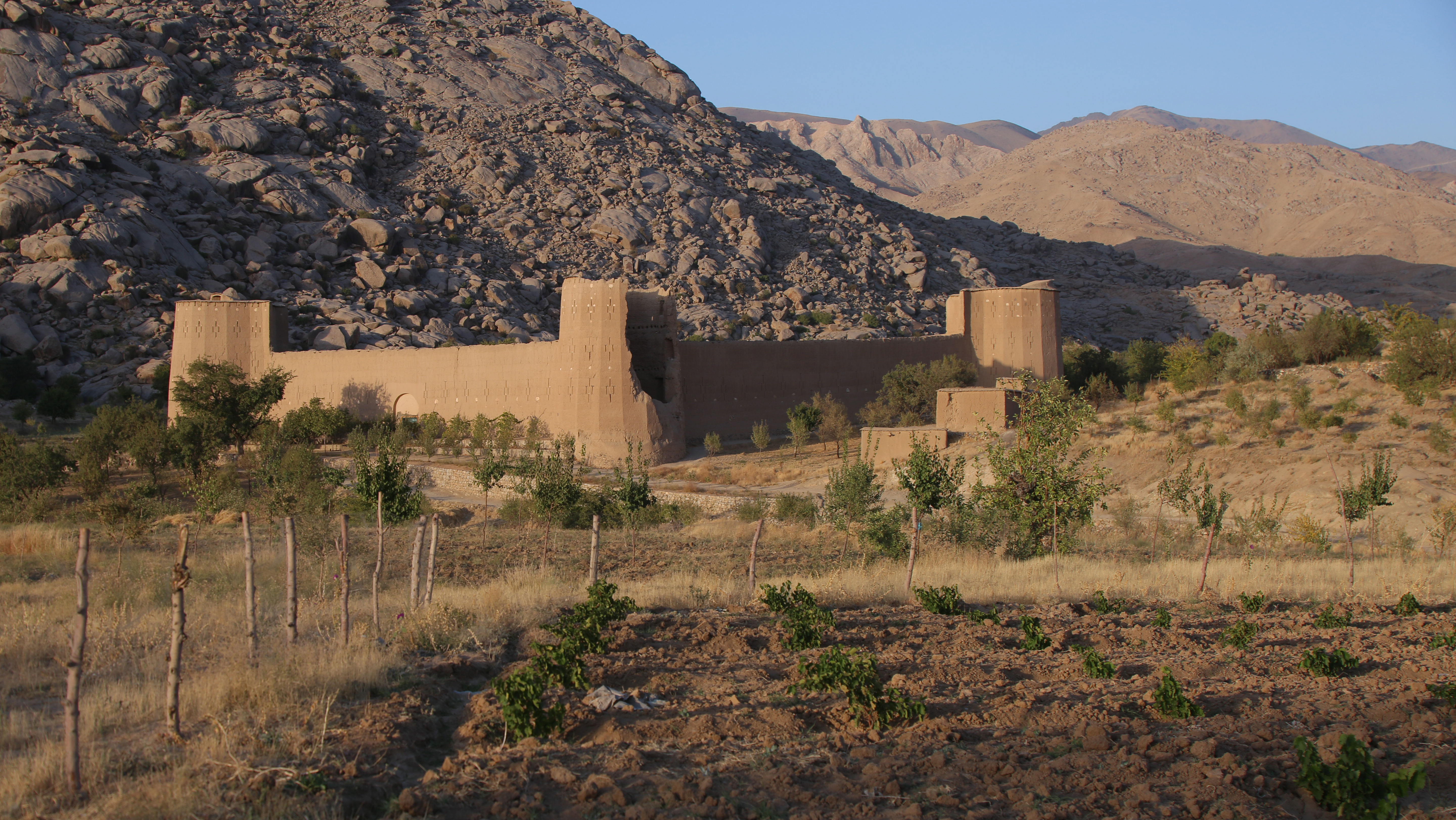 NHLP aims to promote adoption of improved production practices across the country.

Niamatullah’s family has farmed here for decades, and the orchards and gardens lie a short walk from the compound walls. Like all the local villagers, the family has used traditional horticultural methods that stretch back generations to care for their crops. “All of the villagers here earn their income from agriculture and livestock,” Niamatullah says. “We have been using traditional horticultural systems.”

Niamatullah has five jeribs, or one hectare, of land, where he has planted grapevines, and almond, and apples trees, using improved practices and systems with the help of the National Horticulture and Livestock Project (NHLP). “For the past year, NHLP has been here and introduced improved management technologies and practices for growing grapes,” he says. “The people have seen this and now they are eager to join the NHLP schemes and use these new methods next year.”

He was the only villager who decided to participate when NHLP launched its activities in Chahr Asban, home to 500 families, in 2015. Ali Royesh, NHLP officer in Nili district, says that people were not eager because they did not trust NHLP and had not previously seen the advantages of new technologies and farming practices introduced by NHLP. “They doubted the project because there had never been long-term support here,” Ali says. After seeing NHLP’s activities and Niamatullah’s success with the project, villagers are eager to join. “Now people trust NHLP,” he says.

Niamatullah’s success in adopting modern methods is demonstrated in the grapes he is growing, which is proving profitable. “Before NHLP, all the orchards in the village were using the low productive traditional methods and, thus, income was low,” he says. He expects this year’s harvest to sell for triple or even quadruple the price of last year’s crop. “I think that this project will increase the villagers’ income and their situation in life will be better,” he adds. 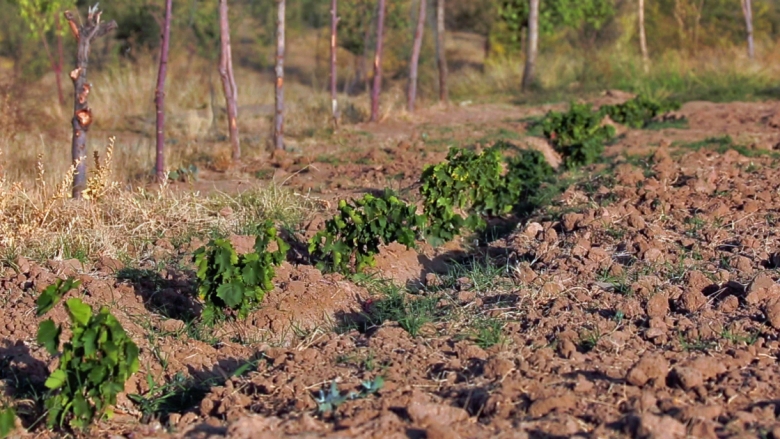 In Chahr Asban village; villagers are eager to join the NHLP program and use these new methods next year.

Photo Credit: Rumi Consultancy/World Bank
" I think that NHLP will increase the villagers’ income and their situation in life will be better. "

Ali agrees that the switch to modern horticultural practices is resulting in higher yields, but he points out: “People do not have an awareness of good horticultural practices here.” In an effort to fill this gap, NHLP holds monthly Farmer Field School (FFS) sessions in which season-specific topics and practices are discussed, such as fertilizing, pruning, irrigation, spraying, and harvesting techniques, and how to maximize yield and income.

NHLP is also providing financial support to Niamatullah to build an irrigation reservoir, still under construction, which will provide a regular water supply to his crops to supplement the province’s erratic rains.

NHLP operates under the Ministry of Agriculture, Irrigation and Livestock (MAIL). With a $190 million grant support from the Afghanistan Reconstruction Trust Fund (ARTF), NHLP is working toward the overarching goal of increased productivity and overall production of horticultural products. It began national activities in April 2013 and its work will run through the end of 2020.

The project aims to promote adoption of improved production practices by target farmers, with gradual rollout of farmer-centric agricultural services, systems and investment support across the country. Its horticulture activities are currently implemented in about 300 districts in 31 target provinces, numbers that may grow as conditions warrant. NHLP activities have three components: horticultural production, animal production and health, and implementation management and technical assistance. 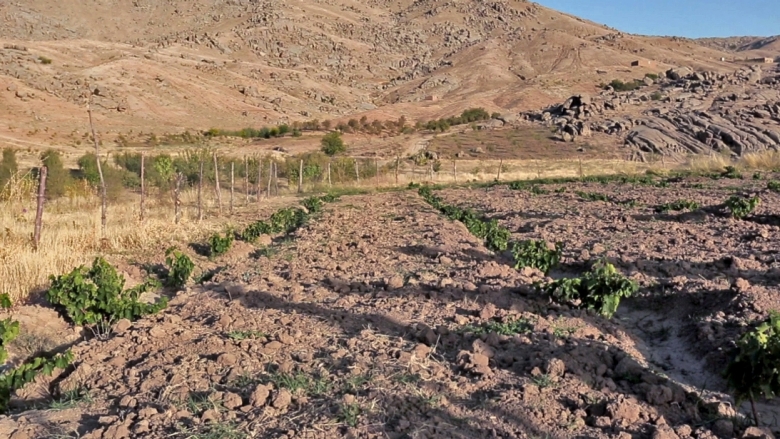 NHLP began working in Daykundi Province in 2014 and currently carries out activities in six of the eight districts, with plans to cover all by the end of 2017. The project has established 1,400 jeribs, or 280 hectares, of grapes, almonds, apples, and apricots in the province, and construction is underway on 18 reservoirs to improve irrigation.

In Daykundi, NHLP works with farmers by providing finances and training to help them employ modern horticultural practices. In the first year of a partnership with farmers, NHLP covers 75 percent of project costs, while farmers pay the rest. In the second year, the project and farmers split the costs equally.

NHLP has begun working recently with over 800 women in the province to create small kitchen gardens to cultivate fresh vegetables for families, aiming to provide locals with nutritious food and spark a culture of kitchen gardening. “Before NHLP, we were not aware that we could cultivate vegetables all year, or of the nutritional value of eating vegetables,” says Sediqa Hussaini, 31, mother of four children. “Now we are even cultivating in the winter, and planting lettuce in addition to onions, radishes, and chives.”

NHLP provides not only financial assistance to farmers, but also works to empower them to improve their own lives and livelihoods. “Our aim is to improve the welfare of local people, not by giving them bread or clothes as one day the bread or clothes will be gone,” says Mohammad Hassan Ibrahimi, the NHLP provincial coordinator in Daykundi. “Instead, we introduce them to improved farming practices to increase productivity and income.”