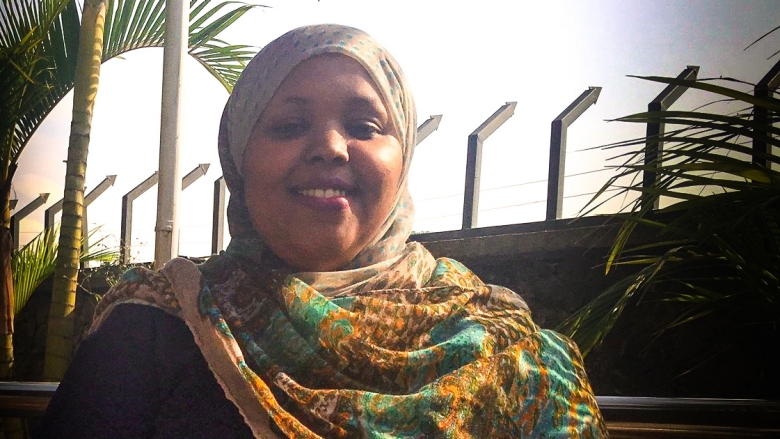 Shukri Warsame is the project coordinator for the Recurrent Cost and Reform Financing Project in Garowe, Somalia.

Photo by: Hassan Hirsi
In this monthly profile series, the Somalia Multi-Partner Fund (MPF) interviews Somalis working with the development projects in the MPF portfolio. Check back monthly for a new profile!

The Recurrent Cost and Reform Financing (RCRF) Project  is an initiative instituted to support the Federal Government of Somalia and Federal Member States to provide credible and sustainable payroll while establishing the foundations for efficient budget execution and payroll systems for non-security sectors. RCRF is recipient executed, meaning that the project is designed and implemented by the client (Federal Government of Somalia/Federal Member States of Somalia).

Shukri Warsame is one of the key actors who implements the RCRF program in Puntland. We sat down with her to talk about how she was introduced to RCRF, her impressions of it and her thoughts on strengthening the public sector in the Puntland State of Somalia.

How did you get involved in working in Somalia?

I first came to work in Somalia about four years ago. At the time, Somalia’s government was still in transition and there was little information from Somalia to the outside world that wasn't negative. I wanted to take part in changing the narrative for the better. There were, and still are, many challenges. But it was only when I committed to working in Somalia that I could properly understand the nuance of these challenges and say ‘these are the people and the effort which will provide a foundation to rebuild our country.’

How did you get involved in working in the RCRF program?

I first heard of RCRF when it was still in its planning phase. I was really encouraged by how it was planned with the government, as opposed to planned for them. If there is anything I’ve learned from working closely with civil society and government, it’s that inclusion of stakeholders is key in programming. Only then can anything be realistically accomplished.

I was also drawn to the RCRF project because of the wide breadth of people benefiting from the project. This project supports financial management but also has a strong social sector component that will focus on supporting the Health and Education sector. Years ago, I wrote my Masters level dissertation on the education system in Somalia - now I’m working directly to tackle the very challenges I wrote about!

That’s convenient! How does the project differ from other government-led initiatives?

RCRF differs because of a combination of factors. First of all, the RCRF project is recipient executed, meaning that the project is designed and implemented by the client (Federal Government of Somalia and its Federal Member States). There is a real ownership in that. Secondly, there was extensive planning that went into the project so now it’s fully aligned with the government’s policies, priorities as well as budget. Finally, the project works with so many government and development partner stakeholders that it will gradually reduce fragmentation and harmonize salaries and operational mechanism throughout the country which in turn will allow the government’s public service delivery to improve.

What do you think this project will lead to?

I foresee a lot of changes in both the near and long-term future. The most obvious result is that this project will be providing predictable financing (salary payments and other recurrent costs for a given period) and strengthen core government controls for expansion of social sectors, especially education and health and the injection of high capacity human resources; With less fragmentation in the financial system, we can assure that qualified civil servants will continue to provide quality outputs and outcomes. I’m also hoping through the Capacity Injection Project, which is funded through the RCRF project, that more civil servant positions, awarded based on meritocracy, will attract young people with relevant qualifications to work in Puntland.

And are you seeing those results?

Yes, absolutely. I’m excited to witness after so many years (after the war), how the Somali government is managing its own projects, using its own systems, while coordinating with development partners, such as the World Bank. In Puntland, over 18 civil servants have already been hired through the capacity injection project with continued recruitment underway. Furthermore, I’m especially happy to report that the gender benchmarks set have been reached in the last few rounds of hiring. I look forward to seeing more women working in the government!

If you could go back and give yourself advice when you first came to work in Somalia, what would that advice be?

I would say that things don't change overnight. I would also assure myself of how I can effectively contribute to development in Somalia. I would say “understand that you provide a fresh perspective to existing challenges, but that those perspectives won’t be useful unless you fully engage in the context. You are there to merge your skills with the context. As a young woman from the diaspora, it may be challenging to break certain prejudices. However, as your efforts are noticed and a culture of meritocracy is ingrained, the fresh perspectives become crucial for the project.”

Now that you’ve been involved in RCRF for a year, what’s next?

As we move forward, I think in the coming years, RCRF project will support the government in dealing better with unforeseen, internal and external shocks to their budget. The RCRF project will also continue to reform and improve the way the core government system operates and how it engages with its citizens. We have now already seen the results with local vendors who engage with the Government being paid directly and in a timely fashion, which we hope will lead to further increase in transparency and confidence when doing business with government.