Best New Research from across the World Bank Tackles Unemployment, Energy, and Competitiveness 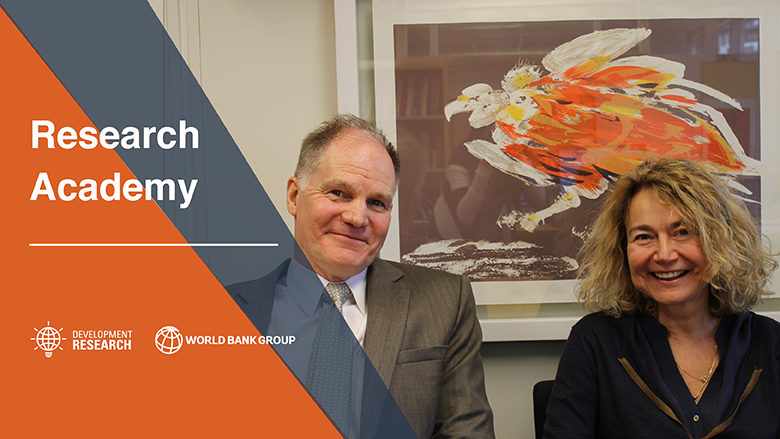 Following a World Bank-wide call for submissions, the annual Research Academy has identified the best new research from across the institution. Jointly sponsored by the Development Research Group and the Office of the Chief Economist for Equitable Growth, Finance, & Institutions, the competition selected the top three new research papers based on their technical quality, originality, and policy relevance.

The competition for 2015 focused specifically on research that made a significant contribution to topics relevant to Equitable Growth, Finance, and Institutions.

" This is what good research does: takes advantage of different strengths from across the institution to examine our untested assumptions, identify effective policies, and spot emerging economic trends,” said Kaushik Basu, Senior Vice President and Chief Economist. “The results are there for all to see—three persuasive papers on a range of topics all relevant to the Bank Group’s central mission. "

“Research plays a crucial role in both learning from past policies and thinking about the future,” agreed Asli Demirguc-Kunt, Director of Research. “But it takes a certain amount of discipline to produce research papers, so the Research Academy is an effort to recognize and therefore motivate more rigorous research all across the Bank Group.”

William Maloney, Chief Economist for Equitable Growth, Finance, and Institutions added “These three winning papers—addressing critical issues of youth unemployment, energy use, and competitiveness—are excellent examples of how Bank staff continue to generate academic-quality research, in spite of increasing demands on their time. The papers bring essential value added to the policy discussions with our clients and strengthen the Bank’s influence and position as the knowledge reference of choice. As an institution, we need to continue to invest in and recognize such high quality work.”

In countries across the Middle East and North Africa (MENA), the jobs shortage poses a serious challenge for governments. Even those with university degrees face high levels of unemployment and take months or years to transition to stable employment—a hardship for youth and a drag on the economy as a whole.

This, at least, is the common refrain in discussions about employment in the MENA region. But a recent collaboration between Tara Vishwanath (Lead Economist, Poverty Global Practice), David McKenzie (Lead Economist, Development Research Group), and Nour Shammout (Senior Policy Associate, J-Pal) adds a wrinkle in this storyline. What they found is that educated youth are holding out for the right kind of job—one with a combination of desirable attributes like prestige, hours of work, and an attractive career path.

The researchers came to this conclusion after conducting an experiment with a job-matching service in Jordan. A local firm conducted assessments of the education and relevant skills and traits of recent graduates and then sought to match the graduates to appropriate job openings. Despite making over 1,000 matches, a mere nine individuals ended up in jobs for longer than one month.

When graduates were later asked why they turned down job offers, very few said that the wage was too low. Instead, they cited concerns about career path or cultural appropriateness and were willing to live with a longer period of unemployment to find a better match.

Reflecting on the surprising results, the researchers pointed to two avenues for public policy. The first focuses on efforts to spur a vibrant private sector—especially one that provides more skilled jobs. Another option is to try to alter the social norms of youth about the types of jobs that are desirable.

A Fridge for Every Household? Energy Use among the Rising Middle Classes

But a big question mark remains around the timing of this growth. How well-off do households have to be to make major purchases like a refrigerator?

To get a better handle on this question, Alan Fuchs (Senior Economist, Poverty Global Practice) teamed up with researchers from the University of California, Berkley and Stanford University. They looked to the roll-out of Mexico’s Oportunidades conditional cash transfer program to understand how changes in income drive an increase in the purchase of energy-using assets.

They found that the relationship between income and energy use is not a straightforward, linear one. Paying for a refrigerator or other appliance is a large, lumpy investment, so increases in income under a certain threshold have little impact on purchases of energy-using assets. Instead, purchases of these assets rapidly accelerate once households pass a certain income threshold, creating a sudden increase in demand for energy.

The evolution of credit markets will also play a role in enabling poor households to achieve the positive welfare gains associated with refrigeration and cleaner sources of energy, and will also shape the future trajectory of energy demand.

The researchers caution that as millions move out of poverty, this will create new challenges for developing country governments. Rapid increases in energy demand will place a significant burden on energy infrastructure, and without adequate investment will lead to significant shortages.

Boosting the Competitiveness of Brazilian SMEs

Productivity—the capacity of firms to turn labor, raw material, and other inputs into goods and services—lies at the heart of competitiveness. Efforts to boost productivity often focus on reforming regulations or investing in skills and education. But what if the key lies with firms themselves, and specifically how firms organize to most efficiently utilize the knowledge of their employees?

To assess the impact of Peiex on firm organization, the researchers analyzed whether the program prompts treated firms to reorganize knowledge by adding layers of more specialized skills and competencies to their workforces. This new hierarchical structure allows firms to expand and to overcome increasingly complex production challenges while keeping in check production costs.

The researchers found that Peiex had a substantial effect on firm organization. Participating firms were about 20 percent more likely to add a new knowledge-based layer to their structure. The effect was even stronger for firms that started off with the simplest organizational structure.

The study also confirmed another finding of the literature: when firms re-organize, within-firm wage inequality increases as firms pay higher wages for those workers in the new, higher layers than in the previously existing ones. Moreover, they show that, controlling for numbers of employees, firms with a higher number layers of knowledge tend to be more successful in expanding their export activity.

According to the authors, their findings contribute to a small but growing body of evidence that places better firm organization at the center of efforts to boost competitiveness.