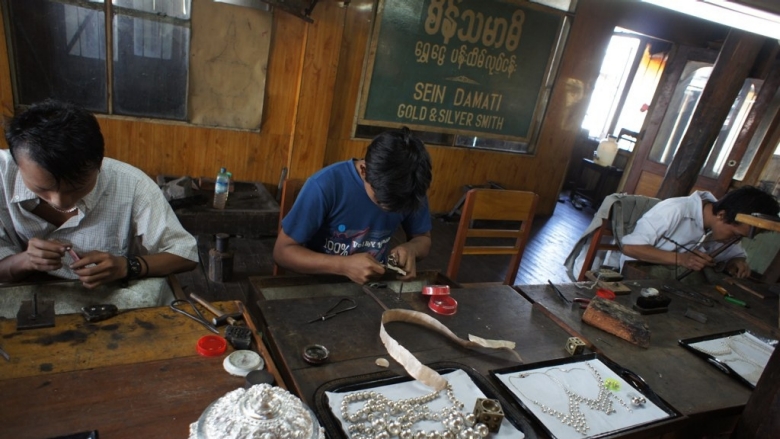 Photo of a silversmith workshop in Myanmar, January 2011 -- Flickr/Esme_Vos

On Friday, March 18 several hundred people gathered in Yangon, Myanmar for the launch of the country’s first EITI report, which provides the most comprehensive data to date on Myanmar’s revenues from extractives; traditionally opaque sectors in the country.

Dr. Maung Maung Thein, outgoing chair of the Multi Stakeholder Group that implements EITI locally, highlighted the difficulties and benefits of the process.

“This is the first step. It was a hard process but now we know more about how much money is coming in and where it is going. This will lead to reduced corruption. Myanmar has been ranked at the bottom of corruption indices; now we will improve,” he said.

Myanmar is rich in natural resources but among the poorest countries in Asia and has historically been identified as opaque and corrupt in its management of minerals and other natural resources. Myanmar not only has one of Asia’s largest reserves of natural gas, but is also a leading source of gemstones. Its rare rubies command the highest prices in the world, and it is the world’s largest producer of jade. But in 2013 the country was rated lowest globally in governance of their natural resources – 58th out of 58 countries by the National Resource Governance Institute Index. In 2011, following 50 years of military rule, a quasi-civilian government took power in Myanmar. In December 2012, the government announced its intention to sign up to EITI and became a candidate country in 2014.

Myanmar’s EITI Report provides the most comprehensive publicly available data to date on extractive revenues. The report findings show that extractives contribute 6% to GDP, 24% of government revenues and 38% of exports.[1]  Over US$3.13 billion in government revenue was reported between April 2013 and March 2014 with 57 companies reporting.

As expected, this first report raises as many questions as it answers. Only a small fraction of the country’s more than a thousand jade and gems companies reported. Approximately half of reported extractive revenues do not go into central treasury accounts, but into “other accounts” held by state owned enterprises, details of which are not publicly disclosed. Other significant issues include poor quality data; compilation made more difficult by paper-based systems; a lack of unique tax identification numbers; and variation in classification. In addition, there is no publicly available mineral license registry and there is minimal reporting on the extractive assets of military holding companies. The report contains 14 recommendations aimed at addressing these deficiencies.

For all its gaps, the report is a major milestone. Myanmar’s history makes the process as significant as the result. A few short years ago, an event bringing together hundreds of people to discuss transparency could not have happened. Envisioning the assemblage of reporters, civil society representatives, civil servants, extractive companies and political figure sat the report launch would have required a leap of imagination.

Bringing together government, the private sector, and civil society into a single process required building trust. Civil society organizations were wary of legitimizing government through their participation. Government officials had little experience talking to civil society. Among the most remarkable achievements of the process was the speed with which civil society organizations assembled an effective and representative structure, the Myanmar Alliance for Transparency and Accountability (MATA). MATA has 518 members and a representative structure in each of Myanmar’s 14 states and regions.

The formation of the Multi-Stakeholder Group, which leads EITI implementation locally, provided the first forum for regular dialogue between government and civil society.

“The EITI process has given civil society in Myanmar legitimacy and an important avenue for engagement during early stages of the country’s reform process,” said Daw Ni Ni Win, MATA National Coordinator, in a recent interview.

Participation in EITI has yielded important spin-offs, including regular meetings between MATA and the Ministry of Mines. This first report is only an initial step.  In future reports civil society has called for the inclusion of all state-owned enterprise revenues, as well as military holding companies.

“It is of great concern to us that we don´t know how much revenue is accumulating at state-owned enterprises,” said Daw Moe Moe Tun, a MATA member of the Multi-Stakeholder Group.  “And illegal exports are leading to lots of problems that must be addressed.”

Myanmar’s EITI Multi-Stakeholder Group has charted out an ambitious work plan of activities over the next four years. These include the creation of Myanmar’s first publicly available mineral license registry and mining cadastre, as required by the EITI Standards. The World Bank will support these activities through a four-year US $3.5 million grant, financed by the UK’s Department of International Development (DFID) and Australia’s Department of Foreign Affairs and Trade (DFAT). Since the start of Myanmar’s EITI effort in early 2013, the World Bank, DFID, DFAT, and the EITI International Secretariat have worked closely together to provide financing, technical advice, research, and implementation support.

On April 1st the NLD took power, marking Myanmar’s first transition to a fully democratically elected government since the 1950s and following a landslide election victory in November 2015. The new government faces enormous challenges and opportunities. Bringing more of Myanmar’s extractives revenue into the state budget to fund urgently needed services, infrastructure, and rule of law will be essential.

[1] A recent report by Global Witness indicates the extent to which jade revenues currently are not recorded.