Solar Panels: the Light at the end of the Tunnel for Thousands of Latin Americans 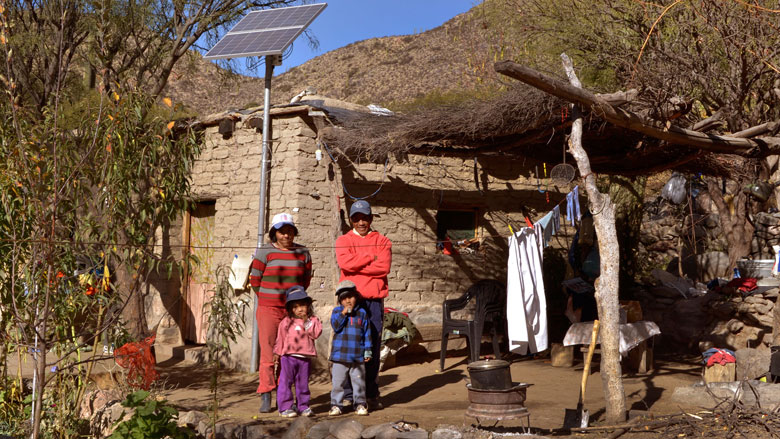 A family with their solar panel in Tucuman, Argentina

World Bank
Solar panels: the light at the end of the tunnel for thousands of Latin Americans

For the vast majority of Latin Americans, the simple fact of having electricity at home or in the office is expected, it is the norm. However, both regionally and globally, there are millions of people who go without this basic service.

For those who live in rural areas, far from the nearest pylon or electric cable, solar panels are increasingly being seen as a solution, offering a potentially life-changing utility.

So, here are four things that you may not have known about solar technology.

Globally, there are 1.2 billion people who are “off-grid”, without any access to the electricity network, according to a new World Bank study. And  without a reliable connection, they spend some US$ 27 billion every year on lighting and mobile-charging technology. Alternatives which are often inefficient or dangerous such as car-batteries, kerosene generators and candles.

It’s an enormous outlay, especially for those communities already living below the poverty line or which are financially vulnerable. As a result, solar energy has a huge potential to lessen the cost and the risk as well as helping to reduce poverty.

Nearly four out of five Latin Americans live in the regions cities. With such high levels of urbanisation there is a significant gap in services between the urban and rural areas.

For them, solar panels offer an affordable and accessible electricity supply for lighting their homes, charging mobile phones, listening to the radio and even for cooking.

In Peru, over 131 000 people now have electricity via an initiative to increase rural electrification, and a further 8 000 will have access by 2017, the majority in remote, poor and vulnerable communities.

Similarly, since 1999 some 21,0000 solar systems have been installed in remote areas in Argentina, providing electricity to public buildings, health and community centres and police stations. However, some 750 000 people, the majority from indigenous communities, still don’t have an electricity connection. Here, solar panels will also illuminate their lives as well as providing hot water to homes and schools in remote regions without any electricity lines.

Even though the link between the sun and electricity has been known for almost two centuries, investments in off-grid solar technology has only recently begun to sky-rocket.

Acccording to data from the World Bank, some US$ 276 million were invested in the solar energy industry in 2015, a fifteen-fold increase on 2012. And this trend is only set to continue. It’s predicted that by 2020, market opportunities in solar technology will reach US$3.1 billion  and reach 99 million homes across the world.

In fact, just the kerosene lamps in Africa and Asia which were replaced with solar panels saved 1.4 million tons of CO2E in 2014 alone.

As a region, Latin America has huge potential for renewable energy, and solar panels offer a “green” way of both connecting those communities which don’t yet  have electricity access and at the same time helping to reduce carbon emissions, the impact of which is being seen with increasing frequency and strength in climatic variations.