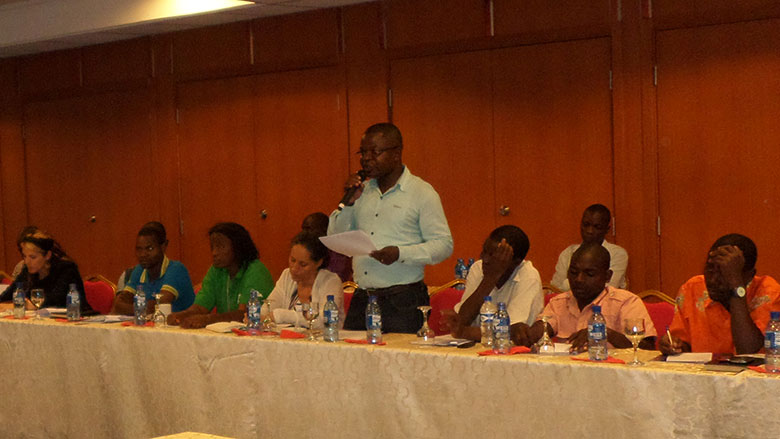 Civil society members participate in a recent consultation with the World Bank Group to inform the new country partnership strategy.

TETE, February 16, 2016 – For the first time, the World Bank Group’s (WBG) highest-ranking in-country representatives visited several rural Mozambique provinces together, to consult with citizens on the new partnership strategy for the country.

Led by Mark Lundell, World Bank country director and Jumoke Jagun-Dokunmu, International Finance Corporation (IFC) manager, the joint tour included working visits to three provinces -- Manica, Tete, and Zambezia – which all have huge potential for agriculture, both cash and food crops. Citizen input from the consultations is part of the preparation of the WBG’s overall strategy for the country, known as the Country Partnership Framework (CPF).

The visit to Manica Province included a road trip of more than seven hours with stops to visit World Bank-funded projects and took the pulse of existing opportunities for further collaboration in the near future.

“Mozambique needs wealth, not rich people,” said one participant representing youth organizations. Such was echoed in various ways by many others in what seems to crystalize a generalized call for a strong focus on good governance and transparency in the preparation of the partnership strategy. Most community service organization (CSO) representatives said they felt strongly about good governance and corruption, which they deemed central to improve development outcomes. Quality of services in areas such as education, health, and infrastructure were some of the areas identified as needing urgent attention.

Most of the people consulted were also in agreement with the CPF’s main focus areas and objectives, and have expressed preference for projects with local orientation which they perceived as more successful in channeling funds all the way to beneficiaries.

“The Bank should invest more on community based approaches in its projects, and CSOs would play a key role in ensuring sound consultations are held among all stakeholders including with local communities as part of its role in development,” one of the participants said.  Another expressed the need for greater emphasis on employment creation through a prioritization of traditional sectors such as agriculture, forestry, fishery, among others. “Resource industries have not been able so far to create as many jobs as people had expected,” he said.

Citizens in Tete Province, also known for its vast mineral riches, offered lessons to the rest of the country when it comes to capital intensive investments versus job creation, and it has had its share of international commodity price fluctuations.

Most participants praised the World Bank for its intention to focus on agriculture and other interventions based on value chain analysis of major potential crops. The World Bank portfolio is gradually increasing its share on agriculture; the current agriculture portfolio for calendar year 2016 will be 15%, in contrast to about 5-6% at the beginning of the past strategy.

“I’m grateful for the Mozambican CSOs’ openness and willingness to share their views with us with such candor. It’s been refreshing and insightful,” said Lundell, who led the discussions, as he wrapped up his last consultation in the city of Quelimane in Zambezia Province. “I’ve learned a good deal from these exchanges and I look forward to the consultations planned for the coming days in Maputo with the central government, private sector representatives and CSOs based in Maputo.”

Other important takeaways include:

Additional consultations with private sector representatives are scheduled to take place in the cities of Nacala, north of Mozambique, and Beira, second largest city in the country, later this month. These will be led by IFC representation in Mozambique and their findings will be factored into the final strategy.