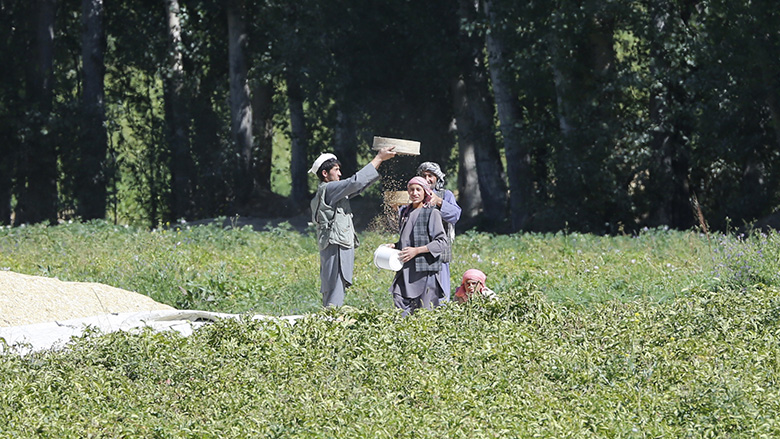 Residents now enjoy an agricultural bounty and an increase in producitiy of the land is due to a sufficient and reliable supply of water to the farms.

BAMYAN CITY, Bamyan Province – Baaz Mohammad Mehr, 42, is working on his land on a quiet and warm summer afternoon. With his sickle, he cuts the green stems and leaves of potato plants.

Mehr has planted potatoes on most of his land this year—a crop of Bamyan Province that is famous across Afghanistan for its unique taste. He has been encouraged to plant more potatoes after seeing bumper harvests in the last two years. “In the past, I harvested about 1,400-1,750 kg of potatoes from my land. However, in the last two years, the same piece of land has yielded up to 3,500-3,850 kg of potatoes. I am very happy about the increase in my crop output.” says Mehr, a resident of Tajik village in Bamyan city who earns his living from farming.

The productivity increase in the land is due to a sufficient and reliable supply of water to the farms, facilitated by the construction of the Asiab Canal Intake Gate in Tajik village. The 1-kilometer long canal consists of an intake gate and a floodgate. It has solved the challenge of outflow of river water, the only source of irrigation of the village farms. Previously, most of the water would go to waste because of the lack of a system to channel water to the farms.

Villagers say that there are no longer any conflicts over water distribution.

Rumi Consultancy/World Bank
" My farmland did not get enough water in the past, but now that the amount of water is increased because of improved irrigation, my crop has increased as well. Now, I can better provide for the livelihood of my family. "

Through the project, over 300,000 hectares of land have been rehabiliated through improved irrigation.

Existing canal systems, like the one in Tajik village, are being improved under the Irrigation Restoration and Development Project (IRDP), under the Ministry of Energy and Water. With support from the International Development Association (IDA) ), the World Bank Group’s fund for the poorest countries and Afghanistan Reconstruction Trust Fund (ARTF), the project builds upon and scales up activities supported under the completed World Bank-financed Emergency Irrigation Rehabilitation Project (EIRP), closed in December 2011.

Aziz Ahmad, 45, head of the Tajik Community Development Council, explains the improvement: “The water level of the river that passes through the village rises each year in the first two months of spring. Floods destroyed the farmlands before the reconstruction of the canal. But those problems are now solved by the construction of the concrete canal intake gate.” The farmlands are now adequately irrigated, while being kept safe from destruction, through the regulation of the water flow at the Asiab Canal Intake Gate. The bridge, which is used for transportation, has also been fortified and made safe.

IRDP supports the rehabilitation of irrigation systems, serving some 300,000 hectares of land, throughout the country,   while establishing hydro-meteorological facilities and services. To date, under the irrigation component of this project, approximately 20,000 hectares (44 percent of the 45,000-hectare target) of restored irrigated area have been covered.

Daad Ali, 48, another potato farmer in Tajik village, has seen his annual crop of potatoes increase from10,500 kg to around 14,000 kg, thanks to the new canal intake gate. He is now more satisfied with farming than ever before.

“My farmland did not get enough water in the past, but now that the amount of water is increased because of improved irrigation, my crop has increased as well. Now, I can better provide for the livelihood of my seven-member family,” says Daad Ali.

A shortage of water also used to incite dispute between the villagers over its distribution. Abdul Basir, 49, another resident of Tajik village, says that there is no longer any conflict over water distribution as villagers used to have frequently in the past.

In addition to its positive impact on irrigation and agriculture, the canal reconstruction to modern standards has created additional benefits to the village. The water mill located by the canal has increased its productivity because of the greater supply of water. As a result, many villagers from nearby villages bring their wheat grains to the mill to grind into flour.

Also, as a result of the increased water supply, residents of Tajik village have been able to activate the micro-hydropower dam and generate sufficient electric power for lighting. “Our micro-hydropower generator is more active than it used to be and our children can now study under the light of electric lamps,” says Abdul Basir, who is pleased that the construction of the Asiab Canal Intake Gate has revived the village.