The Top Agriculture Stories of 2015 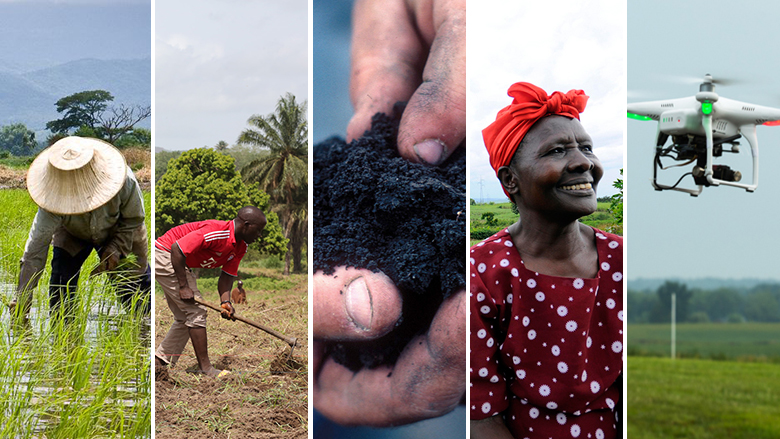 From drone technology to Ebola recovery, we look back at the top agriculture stories of the year.

Many of the world’s greatest challenges – climate change, poverty, natural resource depletion, and hunger – intersect on the fields of the world’s farmers.  These global challenges provide the backdrop to our top agriculture stories of 2015.

If there is one topic that dominates the rest this year, it’s climate change. At the conclusion of this month’s historic climate conference in Paris, more than 180 countries submitted plans for reducing greenhouse gas emissions and adapting to climate change. The momentum towards putting these plans into action is huge.

Agriculture is one of the most vulnerable sectors to climate change, but it is also a major cause, responsible for 19-29% of greenhouse gas emissions. It can also be part of the solution.  The World Bank is committed to promoting climate-smart agriculture to help mitigate the impacts of climate change.

In Vietnam, alternate wetting & drying irrigation techniques in rice cultivation are cutting water use and greenhouse gas emissions while increasing yields by up to 10%.

Agriculture was devastated by the 2014-15 Ebola crisis in West Africa. The epidemic, which kept farmers off their fields, disrupted food production and resulted in severe food shortages.

In April, the World Bank delivered a record 10,500 tons of maize and rice seeds to 200,000 farmers affected by Ebola in Guinea, Liberia and Sierra Leone.  Those countries are only now beginning to recover from a crisis that took thousands of lives and devastated economies.

3.  Healthy soil is key to the future of food

2015 was the International Year of Soils, a U.N. campaign created to raise global awareness about the fundamental roles of soils for human life.  Soils are the basis for 95% of the world's food production, yet each year, we lose an estimated 24 billion tons of fertile soil to erosion and 12 million hectares of land to desertification and drought. The good news is that soil degradation can be addressed through sustainable soil management practices.

At the World Bank, we’ve partnered with TerrAfrica on several large-scale landscape restoration projects, including a project in Niger, where 60 million trees were planted over a 12-year-period, mainly through farmer-managed natural regeneration.

In Madagascar, where widespread erosion and sedimentation are cutting agricultural yields, we’ve supported the establishment and maintenance of 54 protected areas and three forest corridors to safeguard the island’s biodiversity.

Across the globe, women in agriculture have one thing in common: they have less access than men to productive resources and opportunities.  Closing the gender gap would generate significant gains for the agriculture sector and increase yields on women-run farms by as much as 20-30%.  Empowered women are crucial to building the future in rural areas.

A World Bank-supported project in India is helping improve the lives of rural women through self-help groups and agricultural opportunities.

In rural Bolivia, the participation of women in agriculture, both as part of the labor force and as self-employed producers, has significantly increased and benefited the region.

And a 100% woman-run and staffed agricultural enterprise in Kosovo has doubled production and begun exporting their products, showing how successful rural women can be when given the right opportunities.

From drones and robots to mobile apps and satellites, the advances being made in AgTech might possibly hold the key to the future of agriculture as farmers strive to feed the world.

In Uruguay, information technology is enabling 100% traceability of the country’s cattle.  The country’s National Livestock Information System, developed with support from the World Bank, is an award-winning network that provides details on every stage in the raising and processing of an animal, from a tiny Uruguayan farm to a grocery store in Chicago.

A project in China is incorporating various technologies, including drones and integrated circuit or “smart” cards that help provide subsidies to more than 100,000 households, enabling them to adopt environmentally friendly farming practices.

As farmers in wealthier countries benefit from the wave of technological improvements, it is vital to find ways to pass these innovations along to developing countries, before they get left further behind.