BISSAU, November 30, 2015 – Ribbons of clear blue water sparkle against a backdrop of lush foliage consisting of palm trees, vines, baobabs, and mangroves. White herons dot the horizon, diving beak first into the water with a tiny splash. There is no shortage of fish in these waters, and herons and fishermen alike rarely come up empty handed. After all, Guinea-Bissau possesses one of the richest fishery resources in West Africa.

A haven for hundreds of species of birds, fish, and mammals, Guinea-Bissau’s Bijagós Archipelago is a collection of 88 islands that guard the country’s capital Bissau. A UNESCO Man and Biosphere Reserve, the archipelago contains both national protected areas (Orango, João Vieira-Poilão) and community reserves (Urok). Local populations that would otherwise fall into extreme poverty are kept afloat by the natural bounty of these regions, practicing a limited amount of subsistence rice farming, fishing, and gathering of palm fruits and cashew nuts. Possessing an incredibly diverse set of eco-systems ranging from dense tropical forests to mangrove swamps, Guinea-Bissau has become increasingly more conscious of the value of its natural wealth, investing substantially in conservation to the extent that approximately 26% of its national territory is protected.

A participative management of the protected areas with local inhabitants has played a big role in the success of Guinea-Bissau’s conservation efforts. However, it is important to raise awareness of how to use natural resources in an eco-friendly way to ensure sustainable development.

Director of the Institute for Biodiversity and Protected Areas (IBAP)
© IBAP

Conserving these natural havens is the life’s work of Alfredo Simão da Silva, Director of the Institute for Biodiversity and Protected Areas (IBAP). Established in 2005 with funding from the World Bank, the Global Environmental Facility (GEF), and the European Commission, IBAP coordinates the management of protected areas, maps outs species and ecosystems for monitoring, develops action plans for endangered species, and works to create new protected areas. Simão da Silva’s fierce dedication to IBAP’s cause has led to the creation of five national parks and one community reserve: João Vieira-Poilão, Orango, Cacheu, Cufada, Catanhez, and Urok, respectively. Two additional terrestrial national parks (the Dulombi and Boé parks) and three environmental corridors (the Tche-Tche, Salifo, and Cantabane Corridors), which connect natural areas and permit wildlife movement while buffering human communities, are on the brink of being added this year.

“In Guinea-Bissau, we believe in managing biodiversity in order to ensure greater development,” says Mr. Simão da Silva. “While it might seem counterintuitive, protected areas are actually the key to lifting our country out of poverty. At IBAP, we are working to ensure the conservation of plant and animal species that can then increase fish stocks and tourism, and also provide food security for local populations.”

Protected areas in Guinea-Bissau are set up on a zoning system, where central zones are completely untouched and oftentimes overlap with sacred areas determined by inhabitants’ traditional beliefs. Then there are zones where limited activities can be practiced, as long as they are sustainable and are compatible with conservation interests. Lastly, there are zones where villagers reside, fish, and farm. “By allowing the protected zones to be inhabited, we give value to them, which encourages local populations to also work towards protecting them,” emphasizes Simão da Silva.

A participative management of the protected areas with local inhabitants has played a big role in the success of these conservation efforts.  However, it is not without its challenges. IBAP spends significant energy and money on raising awareness of natural resources and how to use them in an eco-friendly way. It also performs routine surveillance to make sure that the rules for each zone are respected, and that there are no encroachments on the protected areas.

In many respects, this natural capital is the bedrock of Guinea-Bissau’s development and its continued management will be a defining factor in the country’s rise to a more prosperous future. Emerging from years of political turmoil and violence that brought the country’s development to a grinding halt, it is now grappling with extreme poverty (33% of its population is getting by on no more than one dollar a day) and significant gaps in infrastructure, security, health, and public finance management.

As Guinea-Bissau works to reverse this trend and rebuild its nation, it will rely on its natural resources particularly in the areas of agriculture, mining, fisheries, and tourism, to overcome its development challenges. However striking the right balance between exploitation and conservation will be extremely critical.

The World Bank has been assisting Guinea-Bissau with its conservation efforts since the early 2000s, supporting a series of coastal management and biodiversity projects to help establish IBAP and the protected areas system.  These efforts have contributed to conserving the country’s rich biodiversity while simultaneously improving the quality of life of local communities.

With the stakes so high for this fragile West African state, the Government of Guinea-Bissau and its partners had to think out of the box when it came to finding ways to sustain conservation and development efforts. The fruit of this thinking is the BioGuinea Foundation, a sustainable financing mechanism for the country’s national parks whose establishment and capitalization is currently being supported by the Government, the World Bank Group, the Global Environment Facility, the MAVA Foundation and others. Conservation, which can be costly and from which income is generated indirectly, often gets swept under the rug when the pressure to develop increases. However, with the creation of the BioGuinea Foundation, Guinea-Bissau will be able to fund surveillance and conservation efforts in the long term, ensuring the sustainable management of ecosystems and protected areas.

“There are very real challenges to financing Guinea-Bissau’s conservation efforts.  If the protected area system is to realize its potential as the backbone of a vibrant future tourism industry, and the economic and social benefits it promises, it is critical that these efforts are sustained.  The BioGuinea Foundation will serve as a financial bridge towards achieving that long term goal,” explains Yudelman.

The Foundation is working towards securing seed capital to launch its activities, and has an initial goal of $10 million. With current conservation efforts entirely dependent on funding from external donors, this foundation will serve to protect against vulnerability to changes in funding priorities and give Guinea-Bissau the means to continue and increase conservation and sustainable development.

One visit to Guinea-Bissau’s natural paradise and one immediately understands that something very special lies at the heart of this small country. Which is why it is no wonder that tourism is high on the list of sectors to develop. Eco-tourism has already taken root in the Bijagós and hopes are that when Guinea-Bissau begins to attract visitors, it will develop high-end responsible eco-tourism services that will allow generations and generations of Bissau-Guineans and tourists alike to enjoy its natural treasures. 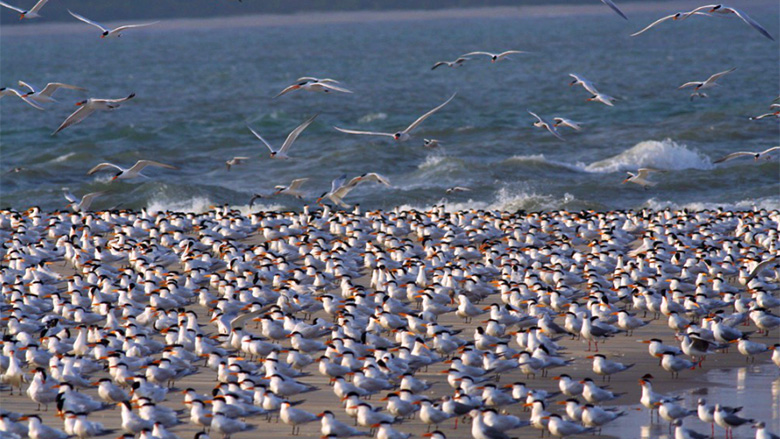