At first glance, Chile and Lebanon appear to have little in common. After all, they’re separated by thousands of kilometers, speak different languages, have dissimilar economies, and engage in relatively small bilateral trade.

But a closer look reveals striking similarities between the two countries. Both are discovering new and important identities within in their respective regions. Both are emerging from turbulent political histories while enduring various infrastructural and resource constraints. And both possess creative and well-educated youth who are struggling to find work in traditional sectors.

Perhaps most importantly, Chile and Lebanon both share a unique opportunity to emerge as entrepreneurial hubs in their regions.

In July 2015, the World Bank and Lebanon’s Ministry of Telecommunications hosted a week-long event aimed at harnessing these similarities to share knowledge and experiences between the two countries’ burgeoning innovation ecosystems. The series of activities, called “A Conversation with Chilean Changemakers”, was implemented locally by Berytech – a startup incubator and support program – and brought to Beirut four Chileans who have championed their country’s rise to entrepreneurial prominence in recent years.

The event was funded by the World Bank’s South-South Knowledge Exchange Facility and supports the Mobile Internet Ecosystem Project (MIEP, www.mie-p.org), a collaboration between the World Bank and Lebanon’s Ministry of Telecommunications to foster entrepreneurship and economic growth.

“Chile’s tech scene is driven by several unique academic, private sector, and government-supported institutions working together towards a shared vision of innovation and entrepreneurship,” explained His Excellency Boutrous Harb, Lebanon’s Minister of Telecommunications. “By better understanding how Chile advanced its startup ecosystem, we can be better equipped to tap Lebanon’s potential as a regional hub of entrepreneurship.”

With this in mind, the week’s events included:

The events were designed to catalyze future conversation, consultation and collaboration between the two countries’ innovation ecosystem stakeholders – as well as to expose them to their surprising and promising similarities.

These similarities were not lost on the likes of Sebastian Vidal, one of the Chilean delegates and CEO of Startup Chile, a government-funded startup support program considered one of the world’s most successful institutions for promoting entrepreneurship. After spending a two-day study tour meeting venture capitalists, accelerators, co-working and creative spaces, media and culture organizations, and entrepreneurs, he reflected, “I’m actually really impressed about everything I’ve seen in the ecosystem. Many patterns here in Lebanon – such as the organic emergence of co-working spaces and accelerators, or the increased exposure to venture capitalists in the region – closely reflect those we saw three years ago when Chile reached its tipping point of entrepreneurship. The pieces are really beginning to fall into place here in Lebanon as well.” 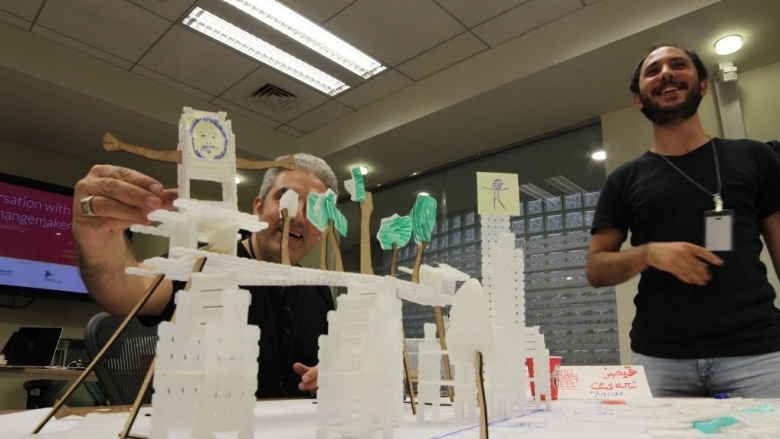 Entrepreneurship as a driver of economic growth

Chile’s emergence as a foundry of startups has been driven partly by its government’s recognition that tech-based entrepreneurship can serve as a driver for the knowledge economy and a catalyst for economic growth, particularly by attracting and retaining young talent. In addition to funding the successful Startup Chile program, its government has also implemented other policies – such as a recent law empowering individuals to register firms online, for free, and in one day – that aim to reduce barriers to innovation.

Lebanon’s government is also adopting a growing role to harness and catalyze a startup culture. A recent landmark policy –Circular 331 – has provided banks with incentives to lend to startups and new firms on the back of interest-free seven-year credits from the central bank.

At the same time, countless community organizations are emerging in Lebanon that promote, support and amplify startups. During the study tour and public event, the Chilean delegates met with organizations including:

Each of these is integral to developing a vibrant startup ecosystem that ensures that the country’s young entrepreneurs access the resources they need to turn their ideas into products that can compete in Lebanon and beyond its borders.

As expected, this week-long activity catalyzed numerous conversations that continue to evolve.

“Throughout the week here in Beirut, we saw different stakeholders – government, universities, venture capitalists, and others – who expressed genuine eagerness to continue sharing experience and building collaborations with the Chilean delegates,” said World Bank ICT Innovation Specialist Victor Mulas, the task team lead for this activity. “Our objective was simply to start this dialogue and introduce the possibility that south-south exchanges about entrepreneurship can have meaningful impact on a country’s innovation ecosystem.”

This dialogue fits into a broader picture. As the World Bank reflects on its twin goals of achieving shared prosperity and reducing extreme poverty, it cannot ignore the potential of entrepreneurship and ICT innovation to help countries advance through – and in the case of the tech sector, even leapfrog – the economic competitiveness challenges they face. Activities like this south-south knowledge exchange serve to remind us that states like Lebanon are not tackling these challenges alone, but rather can benefit from the experiences of countries like Chile whose legacy of innovation and entrepreneurship will only boost Lebanon’s already-burgeoning ecosystem.

Mr. José Menchaca, Chile’s Ambassador to Lebanon who participated in the “Conversation with Chilean Changemakers” public event, summed up the importance of exchanges like these with a personal touch. “My own son is involved with entrepreneurship in Chile,” he reflected, “so I know very well the experiences of these ‘tech ambassadors’ and the value of sharing them with Lebanon, as well as the value of learning from the impressive Lebanese innovation ecosystem.”

Indeed, this weeklong event was likely just the first spark of a dialogue between two countries who – as the Chilean delegates and Lebanese stakeholders learned this week – are certainly not as dissimilar as one might think.