Reversing the Red Sand Tide: A Call for New Solutions to Land Degradation

MAROVOAY, July 20, 2015 — If you look out from an airplane window, Madagascar seems to bleed into the ocean. The island state off the east coast of Africa was described as the “great red island” by Marco Polo due to the abundant rust-red laterite soil. In several parts of the country, this red soil provides the raw material for elegant brick houses. However, on the whole, the soil has a much less picturesque quality; when grassland is burned off to make room for agriculture and trees are cut down for fuel or timber, this red earth foundation can suddenly collapse, creating deep gullies. Large quantities of sandy, nutrient-poor sediment are then washed downhill during the rainy season. The red sand carried by floods and streams clogs barrages and irrigation canals; and ends up covering farm plots, like Marie-Rose’s.

Marie-Rose Rasoanirina is a farmer who was born and raised in Marovoay, Madagascar’s second largest rice growing region. She and her husband own one hectare of paddy, half of which has been swallowed this year by sand. Although she is trying to plant rice in what looks like a clay tennis court, she expects a paltry yield. Her neighbor, Jacques Benandrasana, has given up on rice, a staple crop and the bedrock of Malagasy diet. Less than a tenth of his three hectares has remained free of sand. So, Jacques is taking his chances on corn and sugar cane, without role models or prior experience. Both Marie-Rose, mother of four, and Jacques, who has three children and a fourth on the way, now resort to lending their services to other farmers in distant fields, and try to compensate their loss by raising animals. Overall, about 1,200 out of the Marovoay rice plain’s remaining 20,000 hectares have been affected by sand this year, according to local officials.

“If this continues, I’m sure my children won’t be able to grow rice here in the future,” says Marie-Rose.

Although soil erosion is a natural phenomenon, a combination of factors has aggravated the problem in the past decades. Political instability has bred poor law enforcement and deforestation rates have been on the rise. The Boeny region, where the rice fields of Marovoay are located, has had one of the highest deforestation rates in the country, reaching 1.5% in 2005-2010. Cyclones and erratic rainfalls have made things worse. This year in Marovoay, it rained almost 3,000 ml in two months, instead of the typical 1,500 ml in four months. (A map of cyclone tracks over the last 40 years shows how vulnerable the whole island of Madagascar is to extreme weather – it is on par with Caribbean nations on this count.)

" If this continues, I’m sure my children won’t be able to grow rice here in the future. "

One bright spot in the country’s management of natural resources has been the creation of a large network of protected areas. Starting in 1990, the World Bank and other donors have supported the establishment and maintenance of 54 protected areas and three forest corridors to safeguard the island’s extraordinary biodiversity. Madagascar pledged at the World Park Congress in 2003 to more than triple protected area coverage from 3% to 10% of Madagascar’s land. Despite political upheavals and a significant rise in poverty, the country has met and surpassed that goal.

Protected areas play a strategic role in the country’s economy and ability to withstand extreme weather events such as droughts and floods. But the sanctuaries are under threat as poverty, poor law enforcement and lack of alternatives push people to use and abuse natural resources for land, food and fuel.

One such area is the Ankarafantsika national park. An anomalous patch of green in the straw-colored savannah, it is the largest remaining strand of dry, deciduous forest in the western part of the country and home to half of its birds, a host of reptiles, and eight types of lemurs. The protected area covers more than 136,000 hectares and draws about 11,000 visitors each year -- researchers, birdwatchers, tourists and school groups who help fuel a small but growing number of service industries.

Guy Andrianiaina, one of 22 ecotourism guides hired by the park service, recalls a time, over 15 years ago, when “there were no lights,” just five kilometers outside of the park Andranofasika. “Now it is full of life,” he says. The village of 16,000 people still relies overwhelmingly on agriculture but also boasts 36 hotel rooms and a variety of small roadside restaurants.

Beyond tourism, the real importance of the Ankarafantsika national park rests on its ability to hold and regulate water uphill from agricultural growth centers like Marovoay. The park borders the Betsiboka River which provides transportation from the rice fields to the port city of Majunga. It is also home to the Marovoay stream that irrigates the rice fields (and drains in turn into the Betsiboka). Park Director Rene Razafindrajery says water regulation is “the park’s greatest strategic value,” and works hard to preserve the integrity of its environmental services.

Under his leadership, about 760 local community members are organized into local protection committees that help maintain fire breaks and respond to fire, the dry forest’s worst enemy. According to Rene, those fires are set off by cattle thieves to cover their tracks, or by people encroaching into the forest to dig out and cook wild yams on the fly. Fire is also used to clear fields in the savannah and claim ownership over the land in a country where property titles are rare and difficult to come by. “People look for a better life and go conquer natural resources. Unless there is development in the park’s periphery, there cannot be successful conservation,” he says. The mayor of Andranofasika echoes that sentiment: “Conservation without development is simply empty talk.”

The opposite is also true: development without conservation soon runs aground. Like boats that are trapped by years of sedimentation in the town of Marovoay, or rice farmers like Marie-Rose and Jacques, faced with more sand than they can possibly handle. This year, the villagers from the rice growing commune of Tsararano asked the Ministry of Agriculture to help repair a breach in the main irrigation canal and excavate mountains of dirt and sand. It took 25 days and a mechanical shovel to complete the task.

“The park alone cannot fight erosion,” says Mr. Tanjaka, mayor of Tsararano. “Each year, the problem just gets worse. We need a solution at the right scale. Otherwise it’s all over for rice growing here.”

Programs such as the World Bank-financed Irrigation and Water Management project (known by its French initials, BVPI), closed in 2014, and the ongoing German-backed Program to Fight Erosion (Programme de Lutte Antierosive, PLAE), have tried to address erosion by rehabilitating a number of gullies and planting trees. But much more could be done, and in a more systematic way.

“We’ve had agriculture specialists design projects that include a few conservation measures and conservation specialists who have included agricultural components in their projects to provide alternative livelihoods. However, what we need is agricultural development and nature conservation on a more ambitious scale, and a more strategic division of labor,” says Gianni Ruta, environmental economist at the World Bank country office in Madagascar. Ruta is working with World Bank agriculture, watershed and irrigation experts and government counterparts from multiple ministries to co-design the next generation of rural projects.

In Madagascar, where 1.2 million hectares are under irrigation (more than any other Sub-Saharan African country after Sudan) and almost 30% of GDP depends on agriculture, a more holistic approach to fight land degradation and manage water resources will be crucial to sustain growth and lift out of poverty the 92% of the population still living on less than two dollars a day. For Marie-Rose and her neighbors, faced otherwise with clogged irrigation, sandy water and depressed yields, it would make a world of difference. 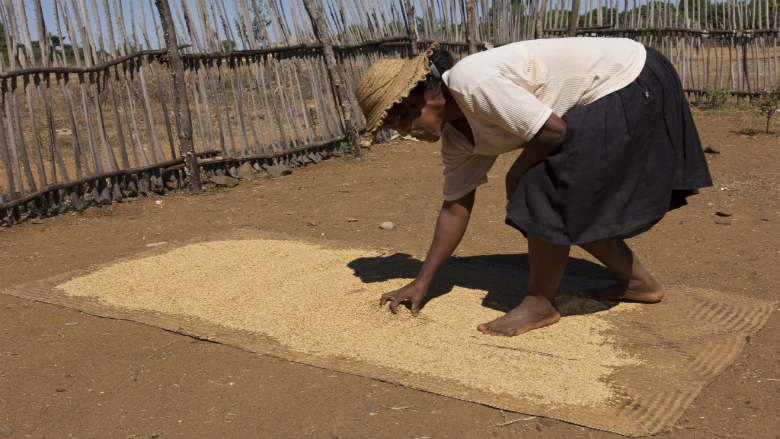 In the Face of Red Sand, a Struggle to Grow Rice in Madagascar