Aid aimed at leveling the playing field for women remains low in what the OECD calls the "economic and productive sectors," including communications, banking and business.

“Economic growth is the most powerful tool we have for realizing a world free of poverty.  The world economy needs to grow faster and more sustainably,” he told a panel here alongside the Third International Conference on Financing for Development. “It needs inclusive growth that promotes opportunity for all, and that requires the full participation men and women.”

Aid targeting gender equality has risen in recent years, contributing to significant gains in health and education in many countries. But aid aimed at leveling the playing field for women remains low in what the OECD calls the “economic and productive sectors” of transport and storage, communications, energy, banking and business, industry, mining, construction, and trade.

Women’s jobs in these sectors are lower-paying and less secure. Globally, they still earn less, own less, run smaller businesses, employ fewer people, and create fewer jobs than men, and they remain vastly more vulnerable to poverty. They are also far less likely than men to have access to a bank account, mobile money provider, or other financial service, according to the latest Global Findex report. IFC, the Bank Group’s private sector arm, meanwhile estimates the annual financing and capacity gap facing women-owned small and medium enterprises in emerging markets at US$260 billion-$320 billion.

All of this adds up to a costly missed opportunity for women, families, and economies, research shows. The OCED estimates that on average, across its member countries, a 50 percent reduction in the gender gap in labor force participation along would boost GDP an extra 6 percent by 2030, with a further 6 percent gain if gaps closed entirely.

“When women earn more, public finances will improve and commercial profits increase because of increased demand and productivity,” President Kim said. “When we promote true equality—including equal pay for equal work—we all stand to benefit, because better educated mothers produce healthier children, and women who earn more invest more in the next generation.”

“We have fallen short in bringing women’s assets, earnings, and employment in line with those of men. This should galvanize us to arm ourselves with the best possible evidence about what works to close these gaps, leverage new partnerships and funding streams, and sharply scale up the smartest, most promising programs to meet these challenges.”

Along with other multilateral development banks (MDBs) and the IMF, the World Bank Group announced plans July 10 to extend more than US$400 billion in financing over the next three years and work more closely with private and public sector partners to mobilize the resources needed to achieve the historic new Sustainable Development Goals (SDGs).

To finance those goals, “collecting taxes fairly, efficiently, and transparently is critically important —in ways that don’t penalize women when they bring home a second income, for example, or spend money on food and other goods that sustain their families,” President Kim said. “So is government spending on the smartest possible investments that lift constraints and unleash the potential of all citizens. Foreign direct investment, bond issuance, and financing from institutional investors are also needed.”

The SDGs are ambitious and demand equal ambition in using the “billions” of dollars in current flows of official development assistance (ODA) and all available resources to attract, leverage, and mobilize “trillions” in investments of all kinds—public and private, national and global.

ODA, estimated at US$135 billion a year, provides a fundamental source of financing, especially in the poorest and most fragile countries. But more is needed. Investment needs in infrastructure alone reach up to US$1.5 trillion a year in emerging and developing countries.

The Bank Group is now concluding global consultations on a new gender strategy, to be launched in late 2015. Participants from government, civil society, and the private sector have stressed that along with healthcare and education, women need equal access to good jobs, training, financial resources, safe public transportation and other key infrastructure, and support in caring for others. 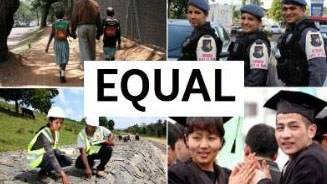