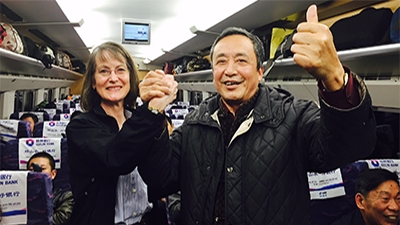 On December 26, 2014, a couple got married on the same day as the Nanning-Guangzhou high-speed rail (HSR) service opened. Coincidence? Not really. The couple met while in college many years ago. Their jobs forced them to live separately in Nanning and Guangzhou.

Despite hundreds of text messages and phone calls, the 577-kilometer (359-mile) distance remained a problem. She said, “We both have full-time jobs and the long-distance relationship took us so much time and energy. Sometimes, I wondered if it was worth it.”

The turning point occurred in 2014, when the completion of the NanGuang HSR line reduced the travel time between the two capital cities to three hours. Three hours means that while she is watching a movie on the train, he can prepare a nice dinner at home. She said, “We were really looking forward to this fast travel service. With it, I don’t think I will worry about our long-distance relationship anymore, because it is not long distance! More importantly, it fulfilled our love.” To mark the occasion, the couple set their wedding day to coincide with the official opening of the NanGuang HSR service. 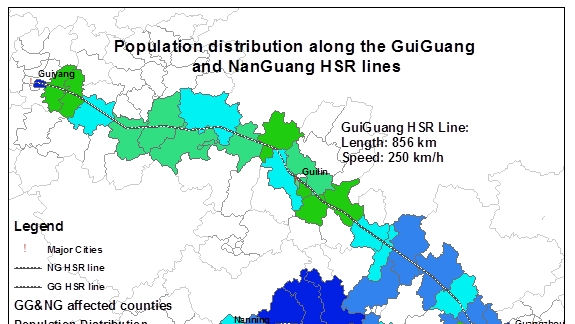 The 574-kilometer NanGuang HSR service significantly reduces travel time between Nanning and Guangzhou; from 13 hours to only three hours and 19 minutes. A journalist from the Shenzhen Evening News experienced this first hand, taking the service to Nanning. He reported, “It is a great experience, comfortable and reliable. Without this choice, I would have had to take a bus for more than 10 hours. You can imagine that it would be really inconvenient for travelling with children. However, I don’t need to worry about the long travel times anymore. Moreover, the train provides great meal service with the option of local food. What a wonderful travel experience!”

Similarly, the 856-kilometer GuiGuang HSR line slashes travel time between Guiyang and Guangzhou from 21 hours to four hours and 9 minutes. On the first day of operation, the station was crowded with passengers who were eager to be the first to experience the service. One said, “With the HSR service, I think I can say goodbye to the highway.”

This line goes through breathtaking landscapes and crosses a bridge more than meters (230 feet) high, which offers unparalleled views of mountains and beautiful green countryside. This has led to the railway line being described as “the most beautiful line in China.” The reporter laughed and said, “When people see this view, I guess they are eager to get off at the next stop.”

Soon after the GuiGuang line started selling tickets, the CNR Network reported, “Air fares are discounted significantly, and the price is even lower than train tickets.” Direct flights from Guiyang to Guilin (420km) have been canceled as the rail service was deemed more attractive.

The new HSR links are expected to boost the development of tourism in the region. The Guizhou Provincial Tourism Bureau noted that after the start of HSR services, more than 9.87 million tourists came to Guizhou during the six days before the Spring Festival Golden Week. This is an increase of 20 percent compared with last year. About 70 percent of tourists traveled to Guizhou by taking the HSR service.

China Daily reported that the Huangguoshu waterfall, the largest in China, had attracted more than 50,000 tourists during the first month after the GuiGuang line opened. Among those, 42.3 percent of them came by HSR. Other major attractions also benefited from the availability of the GuiGuang HSR service, with attendances up 20 percent on the previous year.

The director of a travel agency located in the city of Foshan explained that the dramatic increase of tourists to Guizhou is due to both the cheap train tickets and also the great route that connects scenic sites. The HSR provides a convenient option for travelers to go to mountainous regions and experience authentic local cultures.

With the great accessibility and affordable ticket prices, tourists along the GuiGuang line have a stronger desire to travel, even during winter. To further stimulate tourism, local bureaus have developed strategies to encourage people to travel. For example, discounts for scenic spots, hotels, and restaurants were made available to holders of HSR tickets. As a result of these strategies and the reduced travel times, it is anticipated that travel during weekends and short holidays will become more popular.

The NanGuang HSR service also generated similar positive impacts on tourism. For example, one officer from the tourism bureau explained that the majority of tourists come from Guangdong, demonstrating the increasing popularity of one-day or two-day (including weekend) trips. Although the detailed numbers have not been compiled, increases in tourism have been observed since the HSR service started.

Older travelers find the rail service comfortable and convenient. One couple in their late sixties said, “At our age, it is not convenient to travel by airplane because we cannot sit for too long. However, we don’t have this issue with HSR service. We have booked many trips this year by HSR. We think we could make many more trips later during our lifetime.”

These benefits were observed firsthand during the Bank team’s latest supervision mission for the GuiGuang HSR project. On the train from Guiyang to Guilin, Mr. Tao, together with his wife, explained that they were going on a group holiday organized by a travel agent. It was their first trip on the GuiGuang line and they were very satisfied with the HSR experience given the speed, cleanliness, and comfort. “We are willing to take more GuiGuang HSR trips in the future,” a smiling Mr. Tao said.

The GuiGuang and NanGuang HSR lines are important transport corridors, allowing Southwest China access to the sea through Guangzhou. Guizhou, Guangxi and Guangdong provinces plan to encourage economic development along the HSR lines, which will complement the 21st Century Maritime Silk Road strategy.

The Xinhua News recently held a discussion on what GuiGuang and NanGuang HSR services could bring to China. Experts said that most HSR cities have plans for economic transformation including urban and new-area development. These plans are empowered by the availability of the HSR service. For instance, during the World Bank’s recent supervision mission, the city of Zhaoqing which is located at the intersection of GuiGuang and NanGuang lines, exhibited a comprehensive HSR oriented development plan for its new city district, shown below. 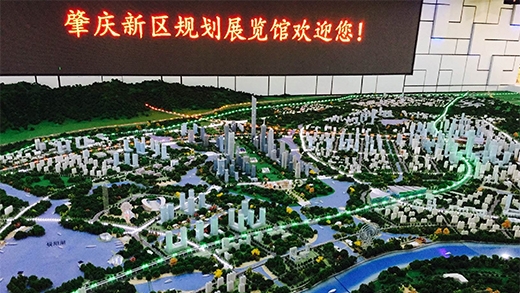 Although the HSR service has only been available for three months, there is already evidence of the economic benefits in social media. For example, users have reported drastic travel time reductions for the Guizhou line. One professor from the Guangxi Normal University noted, “this new connection saves people travel time and improves efficiency of business in the city of Guilin. These direct benefits will further generate impacts on people’s travel, logistics, capital flow and so on, and finally stimulate GDP of the city.”

Also, a researcher with the Guizhou Academy of Social Sciences, Huang Yong, said the GuiGuang HSR would facilitate the transfer of technology and knowledge from eastern coastal areas to the southwestern interior.

The NanGuang line will also encourage economic development of the cities through which it passes and enable the development of trade through business travel. Ms. Yao from the Guangxi Academy of Social Sciences mentioned that many merchants from ASEAN countries come to China for business, preferring to fly to Nanning first and then take a train to Guangzhou for economic and trade activities. Now with the HSR service, these merchants have ready access to other provinces, rather than focusing on Guangzhou city only. By opening up these cities, the NanGuang HSR line is expected to spread the economic activities to other places.

Clearly the economic and social benefits of the NanGuang and GuiGuang HSR lines are apparent, even only three months after they have commenced. But what are the views of the passengers who take them? Check back soon for the results of on-board surveys from these new services.