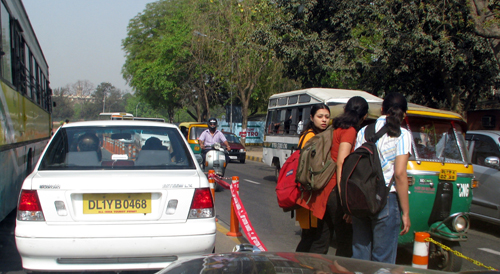 Road traffic injuries and deaths have a devastating impact on individuals, households and countries as a whole.

The evidence speaks for itself: every year some 1.3 million people die as a result of a road traffic collision — more than 3,500 deaths each day. And up to fifty million people are injured annually, resulting in countries’ gross domestic product (GDP) losses estimated at between 1 and 3 percent per year, a value of more than US$500 billion.

Yet this global epidemic has been neglected on the international agenda for many years, and it now requires urgent action if developing countries are to meet specific targets by 2030.

That is the key take away at a World Bank event on Monday, May 4 with senior officials and representatives of the private sector, non-governmental organizations and civil society. The event, convened by the World Bank’s Transport and ICT Global Practice and Global Road Safety Facility (GRSF) partners, aims to mark Road Safety Week (May 4-7) which this year focuses on improving safety for children.

The event includes the participation of high-level panelists from the FIA Foundation, Safe Kids Worldwide and the World Bank, as well as special guest and road safety activist Zoleka Mandela, grand-daughter of Nelson Mandela, who lost a child to a car accident in 2010.

“Unless drastic and effective action is taken, road traffic injuries are predicted to become the fifth-leading cause of death by 2030,” says Keith Hansen, World Bank Vice-President for Global Practices. “Specific targets to improve road safety and save lives are part of the new Sustainable Development Goals which should help us generate momentum to tackle road safety decisively.”

Road traffic injuries, which are largely predictable and preventable, today represent the eighth-leading cause of death in the world, and 90 percent of those traffic injuries occur in developing countries. In the lead-up to a major ministerial event on road safety in Brasilia in November, the World Bank will work closely with client countries and partners in mobilizing and supporting strong government responses to the road safety challenge.

Some of the discussions and presentations at the Monday event focus on four main areas, including:

A Decade of Action

Recognizing the gravity of the road safety crisis, the United Nations General Assembly proclaimed in 2010 a Decade of Action for Road Safety 2011–2020, with a goal of first stabilizing and then reducing by half the forecasted level of global road traffic fatalities in 2020 (compared to the figures in 2010). Achieving this target would help save five million lives.

In this context, the World Bank Group — with the support of its GRSF partners — has not only increased its lending specific to road safety interventions, but has also moved towards adopting a multi-sectorial approach, as well as mainstreaming road safety components into its transport projects.

This holistic approach, also known as Safe Systems, is helping countries develop sustainable road safety strategies that rethink the relationship between roads and people, encourage the use of efficient mass public transport, and use new approaches to assess existing gaps and measure progress.

The overall objective is to understand the opportunities and risk factors, and then effectively address them with practical measures. The Safe Systems approach looks at all components of an effective road safety policy: institutions, infrastructure, behavior, enforcement, and post-crash care.

Since GRSF’s establishment, the World Bank’s road safety lending has almost tripled to approximately US$1 billion over the past nine years (FY06-14), compared to US$358 million for the previous FY97-05. More funding and high-level political will, however, are key elements still lacking in many countries around the world.

A few examples of achievements by the World Bank-led GRSF over the past few years include:

Pierre Guislain, senior director for the Bank’s Transport and ICT global practice, notes the opportunity for leveraging partnerships, such as the Bloomberg Philanthropies, to advance the road safety agenda in countries and cities around the world.

Bloomberg, for example, has committed about US$125 million for the next five years to implement road safety projects in five countries and 10 major cities, jointly with the World Bank-led GRSF, Embarq, the World Health Organization and others.

“The World Bank is in a unique position to lead the global effort for the implementation of road safety targets in developing countries,” Guislain says. “We have the tools and funding mechanisms, but collaboration between countries, the Bank and other partners will be key for achieving impactful results.”