Woman Entrepreneur Shows How to Run a Business

HERAT CITY, Herat Province – Sweeta, 26, holds an economics degree and comes from a family who does not see any difference between son and daughter. After marriage, however, she stepped into a family who believed that girls and women should live their lives inside the house. 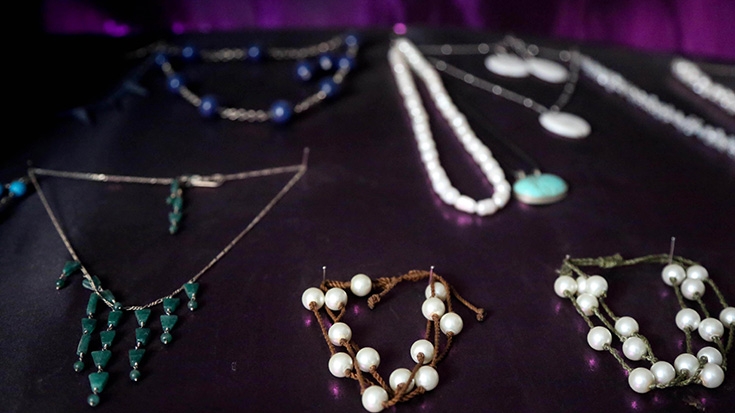 A variety of handmade ornaments on display.

Rumi Consultancy/World Bank
" “Initially my in-laws were telling me it was against their values that I go out and work. However, despite all their resistance I was able to convince them and prove myself to them.”  "

But Sweeta, now a mother of two, was able to convince her in-laws that she could run a business. “Initially my in-laws were telling me it was against their values that I go out and work. They would tell me how come a woman could work, and that, too, with men? How can a woman basically run a business?” recounts Sweeta.  “However, despite all their resistance I was able to convince them and prove myself to them.”

Today, Sweeta manages a small firm that manufactures jewelry made of gemstones and has a store in a women’s market in Herat City dedicated to women’s handmade products. All the sellers in this market are women as are the majority of its customers.

Sweeta started her business four years ago with an initial capital of nearly US$1,000; her net capital today is about US$90,000. Her business started thriving after she procured polishing machines, as one of the biggest challenges she faced in this business was the lack of machinery for processing gemstones. Gemstones would be sent to India or Pakistan for polishing and then returned, after which the price of the stones would be much higher. Sweeta and other owners of handicraft businesses would have no other choice but to buy them.

“I borrowed US$5,000 and repaid monthly. We bought two machines and only then our business thrived and my capital increased. You know, the more profit you make, the more your capital will grow,” Sweeta says. “The shortcomings were addressed and our income increased.”

Sweeta’s access to credit was made possible through financial support from the World Bank’s International Development Association (IDA) and Afghanistan Reconstruction Trust Fund to the Microfinance Investment Support Facility for Afghanistan (MISFA) since 2003. In November 2013, IDA provided $50 million to the Access to Finance Project, which gives further support to MISFA to increase access to financial services of micro, small, and medium enterprises.

Sweeta sells a variety of handmade ornaments decorated with precious stones like turquoise, emerald, ruby, and agate in her store. “Initially I learned this craft from a foreign woman. Later she left Herat and I thought I should continue with the production of the handicraft and also help other women start this work,” she says.

Although men are also involved in the handicraft business, Sweeta decided to employ only women: “I have two or three competitors in this market; however, my business prevails because it is handled entirely by women. I believe women’s work is more delicate and maybe that is why we receive more orders.”

Sweeta’s staff of 12 women makes around 30 items daily including necklaces, rings, and bracelets. From her earnings, Sweeta is able to pay her staff and purchase raw materials, as well as show that she is capable of running a successful business.

Microfinance is part of government’s Afghanistan National Development Strategy (ANDS).  ANDS sites microfinance as one of the tools that the government can use to reduce poverty, but specifically to create opportunities for small rural entrepreneurs, especially those engaged in agricultural activities.

Today, the microfinance sector, with a quarter of a million clients across the country, is one of the biggest national development programs in Afghanistan. Microfinance activities have been possible with financial support from the World Bank’s International Development Association (IDA) and Afghanistan Reconstruction Trust Fund (ARTF) to the Microfinance Investment Support Facility for Afghanistan (MISFA) since 2003.