Providing a Catalyst for the Preservation of Ethnic Minorities' Cultural Heritage

Hidden deep in the mountains of China’s Guizhou Province, are many small villages inhabited by Miao, Dong and other ethnic minorities. These ethnic groups have unique, centuries-old traditions, including ethnic heritage architecture, cultural landscapes, and living traditions of song, dance, crafts, and festivals. Many of the traditional crafts are still practiced with great skill and include embroidery, batik, silver ornament making, and weaving.

However, with the rapid social changes and urbanization in recent years, these valuable cultures and traditions are under severe threat and in some cases face extinction.

Biasha, an old Miao tribe, lives in a mountainous village surrounded by deep green forests. In the morning, the mist-shrouded village presents a mysterious and alluring sight.

A group of Biasha men greet visitors at the village gate by firing gunshots into the air. Biasha are known as the “last gun tribe in China” as all men and boys in the tribe carry guns, although they are now only fired during displays for tourists.

Improved infrastructure benefited both villagers and tourists. “We no longer get muddy feet on a rainy day.  With improved infrastructure, there are more tourists. It helps preserve our village and our culture,” said Jia Yuanliang, head of the Biasha Village, which consists of 505 households and about 2,500 people.

Gun Xuewen, a 36-year-old father of two, joins other villagers in the cultural performance for tourists that includes traditional music, dancing, hair cutting with a sickle, a wedding ceremony, as well as displays of marksmanship.   “I earn 10 yuan from each performance,” he said. During the tourist season, he performs several times a day.

Tourism provides the old Biasha Miao community with both a source of much needed additional income as well as an incentive to preserve their culture and tradition.

The Dong sing their way to cultural preservation

As a popular saying of the Dong people goes, “rice nourishes the body and songs nourish the soul”. The Grand Song of the Dong ethnic group, multi-part singing performed without a conductor, is on UNESCO’s list of oral and intangible heritage of humanity.

Wu Rongde, 43, is the leader of the village choir in Xiaohuang, an ethnic Dong village in Congjiang County famous for its Dong Grand Song singing culture. “For the Dong people, singing is our life. We cannot do anything without singing,” Wu said. “We educate our children and express our love through singing. Our Dong ethnic group does not have a written language.  We use songs to record and carry forward our history and culture.” Wu and his choir often tour the country and even venture abroad to stage performances of the Dong Grand Song.

With help from the project, investments were made to build and rehabilitate the village road, sewers, public toilets and tourist facilities in Xiaohuang to accommodate the increasing number of tourists who are attracted to the Dong Grand Song from all over the world. Many villagers also repaired and expanded their traditional wooden houses into homestays.

Jia Shanfeng, 32, runs such a homestay in his family house. “We have benefited directly from the development of tourism. Tourists come to our village not only to enjoy our grand song, but also to experience our food and way of life,” he said. “Providing such services to tourists brings significant financial benefits and economic opportunities for our village and people.”

Jia comes from a family of grand song singers. His father and mother are both lead singers in the Dong choir, and his sister is a prefecture-level Dong Grand Song singing culture inheritor. The family has been invited to many performances and singing competitions in and outside the Province. Prizes won by the family on various occasions are displayed in their house, an attraction to visitors.

“Grand Song singing is the essence of our culture. Our ancestors have passed it down to us, and we must protect it and carry it forward,” said Jia.

World Bank Group
" We no longer get muddy feet on a rainy day. With improved infrastructure, there are more tourists. It helps preserve our village and our culture. "

Papermaking is one of the Four Inventions of ancient China. Today the people in Shiqiao Village in Danzhai County still keep the ancient technique of hand-making paper alive.

Shiqiao Village has a papermaking history of more than 1,000 years. This traditional technique is included in the national intangible cultural heritage list of China.

The Shiqiao paper is made with tree bark and unpolluted spring water from the local mountains. An ancient papermaking workshop is located in a natural mountain cave.

Recently, with funding from the project, an investment was made to improve Shiqiao Village’s infrastructure, including the main road and village gate, water supply, drainage system, sewerage and solid waste facilities. Support was also provided to the preservation of ancient papermaking sites and demonstration households.

Wang Xingwu is the national-level inheritor of Shiqiao papermaking skills. “My family has been engaged in papermaking for 18 generations. I am the 19th generation to inherit the skill,” said Wang.

Wang, 49, learned the papermaking business from his father in 1981.  He makes a special kind of paper for repairing ancient books. China’s National Library and National Museum are among his major clients. He also makes paper for Chinese traditional ink painting and calligraphy, which is favored by artists and art professors. His paper is sold in Japan, the U.S., France, Australia and other countries.

At one of the paper shops along the main village road, Luo Qun and her sisters, wearing traditional Miao dress, were carefully placing fresh grass leaves and wild flowers on to a papermaking plate. “It is ‘flower and grass paper’, and is used for decorative purposes - to make wallpaper, lanterns, umbrellas, and bookmarks,” Luo explained.

The Shiqiao Qianshan Ancient Papermaking Cooperative comprises 68 papermaking households and more than 100 people. Co-op leader Wang Xingwu, takes and allocates orders from clients among the member households. Wang’s dream is to scale up his business and make the best handmade paper in the world.

The thread of embroidery survival

Near the Shiqiao village, a new exhibition center has been built to display local cultural heritage, such as Miao embroidery, silver ornaments and batik making.

Dressed in an exquisitely embroidered costume, Wu Ruqun, a Miao woman from Paizuo Village, was embroidering on a piece of cloth. Wu began learning the art of embroidery from her mother when she was seven years old. Now she works for a local company that uses embroidered pieces to produce garments, purses and other products.

Without a written language, the Miao ethnic group used to record their history and culture in the embroidery on their clothing. It was a common skill for every Miao woman passed down from mother to daughter. But nowadays, young people are no longer interested in learning embroidery as they migrate to cities and do not wear their traditional costumes.

Wu and the others are invited to demonstrate embroidering and other traditional skills at the exhibition center so that visitors can observe and appreciate the beauty of ethnic culture. Wu also passes her embroidery skills to women in other Miao villages in organized training programs.

Jiuzhou in Huangping County has a long history dating back 2,000 years. Located along the Wuyang River, Jiuzhou was in the past a water and land transport hub and a thriving business town. The old buildings with white walls and black-tiled roof are the legacies of Hui merchants who traveled to Jiuzhou for business in ancient times and brought their style of architecture.

Due to its long history, there are many historical buildings in Jiuzhu, such as the Xishangjie Street (ancient business street), Tianhougong (temple of the Goddess of the Sea), Wenchanggong (temple of studies and literature), the Catholic Church, and the private residence of the Zhu Family.  However, with the passage of time, these ancient buildings fell into disrepair.

After five years’ preparation, restoration work began in 2011 with funding support from the project. “We followed the principle of repairing 'old as old' so as to restore the old buildings to their original glory during the Ming and Qing dynasties,” said town chief Wu Tao. Other project work included environmental rehabilitation, solid waste management, construction of public toilets and tourist facilities, and public education to raise awareness of the importance of cultural heritage.

A native of Jiuzhou, Tang Zhanghua is engaged in the sorghum wine trade. He looked forward to moving into his new shop on the restored Xishangjie Street, expecting his business to grow with the increasing numbers of tourists in the near future.

A community participatory approach was adopted in the implementation of the cultural and natural heritage protection and development project. Villagers were involved in the entire process from project selection, design, execution and supervision. The small infrastructure construction and public facilities built under the project were owned and operated by the village. This approach provided more incentives and sense of ownership to the villagers, and also enhanced the transparency of the project implementation process.

Li Zhengxue, a Ganrong Village resident is one of the beneficiaries from the project support for housing repair.  Li’s old house was built in 1957, had no running water or private toilet, and was dilapidated. With a grant from the project combined with a bank loan, Li built a new two-storied wooden house which is not only much bigger with modern facilities, but can also serve as a homestay for tourists with its several guest rooms and large dining area.

The allocation of grants was a joint decision. “We held a village meeting to inform all villagers. Applications were reviewed by elected representatives of villagers, and the result was displayed publicly for five days,” explained village chief Li Shengsheng.  Priority was given to the poorer families. The first group of 40 households in Ganrong Village received grant support to repair or rebuild their houses.

World Bank loan as a catalyst

“The World Bank money was timely for most of the project counties and had a ‘leverage effect,” said Li Guang, Director of the Guizhou Project Management Office.

“When the U.S.$60 million was allocated to 18 project entities, it was not a significant amount of money for each. But, implemented together with domestic projects, it has not only helped mobilize more domestic resources, but also promoted more effective use of the domestic investment and accelerated project implementation, ” said Li Guang.

“The project has raised local communities’ awareness of their own cultural heritage, promoted their sense of pride and confidence, and served as a catalyst for its protection and preservation,” said Li Guang. 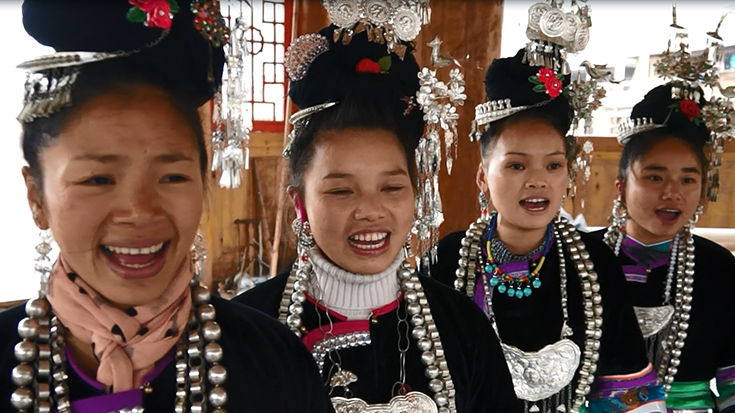 The Dong Tribe Sing Their Way to Cultural Preservation 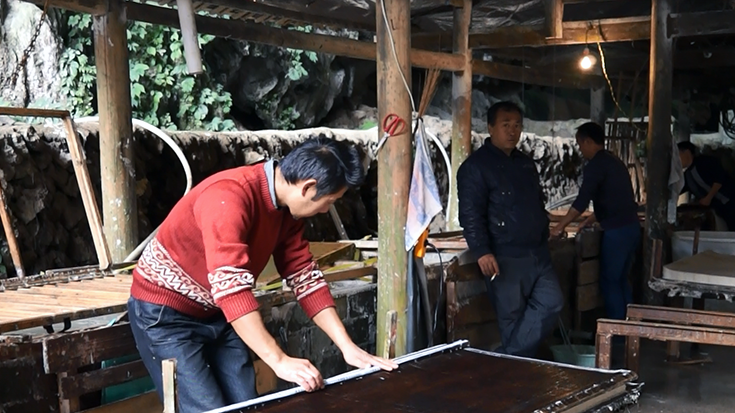