January 21, 2015
The World Bank Brussels Office and the European Commission’s DG Economic and Finance (ECFIN) organized a presentation of the January 2015 edition of the World Bank’s 2015 Global Economic Prospects on January 15th 2015 at the DG ECFIN premises in Brussels.


In her presentation Ms. Franziska Ohnsorge, lead author of the report, emphasized its salient points as follows:

Björn Dohring, Head of Unit in the EC’s forecasting unit, commended the report for its comprehensive analysis and findings, not least as an important input into the EC’s own analysis and forthcoming winter economic forecast.
Questions raised by EC staff were on, amongst others, the prospects of growth for Africa and poverty reduction, projections for oil prices in 2015-16, and the role of remittances within the financial architecture.

On Africa Ms. Ohnsorge said the continent continued to be the bright hope within the global economy, having been a star performer in 2014. However, going forward, the fall in commodity prices is likely to slow African growth. As a result global poverty targets are likely to be missed under the current trajectory. As regards oil prices, she said prices are expected to stay low in the short to medium with only a very marginal increase expected by 2016. She described remittances from rich to poor countries as a great balancing instrument due to their counter cyclical nature and the diversity of the source of remittances

At the close of the discussion the representatives from the EC and the Bank agreed to continue dialogue on global economic trends and explore further discussions in Brussels on the occasion of the next edition of the GEP in July 2015. 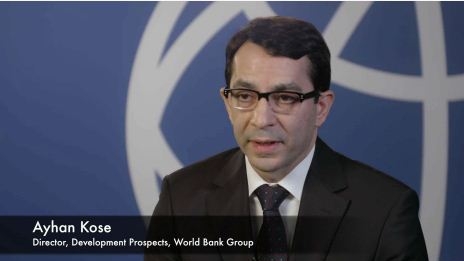 Most Developing Countries to Benefit From Oil Price Slump