New Guide Takes Aim at Violence Against Women and Girls 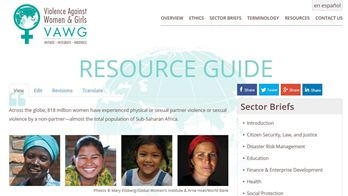 The Violence Against Women and Girls Resource Guide, published by the World Bank Group, the Global Women's Institute at George Washington University, and the Inter-American Development Bank, offers information on the characteristics and consequences of VAWG, as well as guidance on integrating VAWG prevention and response into policies and legislation, sector programs and projects.

WASHINGTON, December 3, 2014—Violence against women and girls poses a major obstacle to ending poverty, but development agencies and international financial institutions are uniquely positioned to tackle this global epidemic, according to a new resource guide released Wednesday.

“Violence against women and girls is an outrage,” World Bank Group President Jim Yong Kim said. “It demands urgent attention as a violation of fundamental human rights. Along with terrible individual suffering, it also imposes steep, avoidable economic costs on families, communities, and economies—helping keep some of the world’s most vulnerable people in poverty.”

Such violence is widely recognized as hindering social and economic development as well as achievement of internationally agreed targets such as the anti-poverty Millennium Development Goals (MDGs), according to the guide—published by the World Bank Group, the Global Women’s Institute at George Washington University, and the Inter-American Development Bank.

One of the most oppressive forms of inequality, VAWG includes child marriage, genital cutting, honor killings, domestic abuse, rape, and economic deprivation. It prevents women and girls from participating equally in social, economic, and political life and perpetuates the cycle of poverty. Its impact is felt across development sectors, from mining to infrastructure, transport, technology, education, sanitation, social protection, governance, health, labor, and disaster response—requiring a comprehensive, multi-sectoral response.

The World Health Organization (WHO) last year reported that 35 percent of women worldwide have experienced non-partner sexual violence or physical and/or sexual violence at the hands of a partner. Most never seek help or tell anyone. While violence by partners is the most common form of VAWG, sexual violence carried out by strangers is a serious concern. It is particularly common in situations of displacement, natural disasters, or conflict, for example, when rape may be used as a weapon of war.

Direct health care costs of partner violence can reach exceptionally high levels. In the United States, healthcare costs among women experiencing physical abuse have been estimated to be 42 percent higher than among non-abused women. A recent study estimates total economic costs to be at least 5 percent of global GDP—more than double what most governments spend on primary education.

The evidence suggests that violence against women and girls incurs economy-wide costs, and these can impose significant challenges for developing economies in particular. They include spending on services, lost income, and diminished productivity. New research also indicates that violence against women and girls is preventable and that the most successful strategies are complex, using multiple approaches across many different sectors, with involvement by men and women over a substantial period of time.

International financial institutions, other multilateral institutions, and bilateral donors have a unique and crucial role to play in preventing and addressing VAWG in both low- and middle-income countries—leveraging their reach, partnerships, lending, and expertise to share best practices and promote investment in strategies for preventing and responding to violence.

VAWG prevents women and girls from participating equally in social, economic, and political life and perpetuates the cycle of poverty.

To address VAWG, the guide says, development practitioners should:

The resource guide, which is accessible online and will be continually updated, also comprises examples of good practice in addressing VAWG: