Investing in Young Women Pays Off in Rwanda 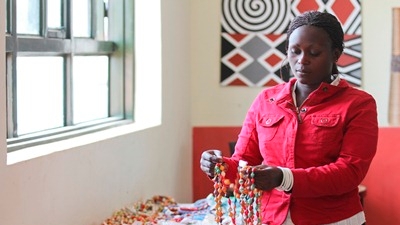 AGI program participant Josephine Tuyamabaze, 24, was an orphan and became pregnant at a young age. She now has two children and lives with their father, a woodcutter: "I have acquired great skills and I am already planning to start up an enterprise and apply these skills to support my children. I want to be able to educate my children and support my husband."

KIGALI—Rwanda has made major strides over the last decade in boosting growth, reducing poverty, and tackling gender inequality. From 2001-2012, its real GDP growth averaged 8.1 percent while the poverty rate fell from 59 percent in 2001 to 45 percent in 2011. It also has the highest number of female parliamentarians in the world, with 63.8 percent of seats in the lower house occupied by women.

The country’s large youth cohort—some 19 percent of the population is aged 15-24—faces major obstacles in entering the work force. Adolescent girls face the added burdens of widespread early childbearing, high fertility, and gender-based violence.  Young women are also less likely than their male peers to complete secondary education, limiting their opportunities and ability to work their way out of poverty.

To tackle these challenges, the Rwanda Adolescent Girls Initiative (AGI) launched a pilot program in 2012 to boost job skills and incomes among disadvantaged adolescent girls and young women, aged 15-24, in two urban and two rural districts of Rwanda.

Young women get six months of skills training in areas such as food processing, culinary arts, arts and crafts, and agri-business—complemented by life skills courses, social support, and mentoring.  Participants also receive support to form cooperatives and connect with the private sector, including exporters: One public-private partnership is helping participants break into high-end US and Japanese markets.

Three cohorts of young women—2,007 in all—will have completed training in September 2014. While the project is still in the pilot stage, anecdotal evidence suggests it is having a positive impact on the lives of participants.

For example, 23 girls who studied food processing at the Gaculiro Training Center in Kigali have been placed in two-month internships with local industries. 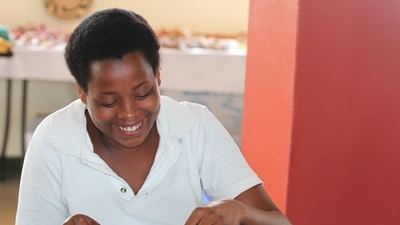 Chantal Uwamariya, 20, was forced to leave school in 2008 when her single mother could no longer afford tuition: "I believe I will become an important businesswoman and change my family’s situation for the better. Then I shall be sure that I can get married and set up my own family." 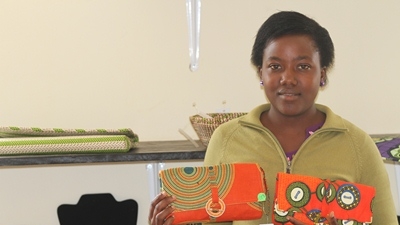 Maria Nyiraminani, 20, the youngest of eight children, had to leave school to help her mother at home after her father died in 2009: "Now I am sure I can get a job and help my mother… I hope one day I will be able to help young girls in poor settings."

Graduates from the first cohort have formed 60 cooperatives, typically comprising 18-20 members, and several businesses. Several cooperatives have ventured into non-traditional farming such as mushrooms and beekeeping. In Bushoki, a rural village north of the capital, 22 girls have established a restaurant that is quickly becoming popular in the area.

Life skills—social and behavioral skills that enable trainees to deal effectively with the demands of everyday life—is an important part of the Rwanda AGI. In addition, through a partnership with Girl Hub Rwanda, participants are provided with a designated space that is safe and supportive, aimed at helping girls make healthy choices.

“I thought my pain and sadness were mine alone but when I came to this program, I realized that there are many girls in similar situations,” said Chantal Uwamariya, 20, an AGI participant forced to leave school in 2008 when her mother could no longer afford tuition.

“We have been trained how to live with other people and how to handle difficult situations. This… keeps me going.”

Maria Nyiraminani, 20 and the youngest of eight children, had to leave school to help her mother at home after her father died in 2009. With AGI training, she said, “Now I am sure I can get a job and help my mother… I hope one day I will be able to help young girls in poor settings.”

The Government of Rwanda plans to maintain designated training centers for young women after the AGI pilot ends later this year, while similar AGI programs appear to have impact in other countries.

In Liberia, participants in a similar program, Economic Empowerment of Adolescent Girls and Young Women, reported a 47 percent increase in employment and 80 percent jump in average weekly earnings compared with a control group.

In Nepal, the Adolescent Girls Employment Initiative is helping young women find jobs in lucrative, non-traditional fields for women such as gadget repair and aluminum working.

The AGI, launched in 2008, is a multi-donor trust fund administered by the World Bank Group. Its donors include the governments of Sweden, Denmark, Norway, Australia, the United Kingdom, and the Nike Foundation.

Be a Barista in Kathmandu, Nepal—thinkEQUAL