From the Gender Director: 2013 Year in Review 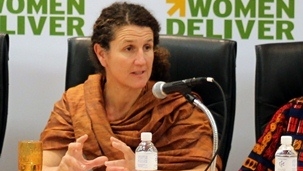 The World Bank participated in a range of regional events around the world, including Women Deliver, which attracted 5,000 people to Kuala Lumpur.

At the operational level, the World Bank Group is continuing to deepen its focus on gender as illustrated in our summary update. Importantly, this is not restricted to sectors that have traditionally performed well, such health and education, but across the entire spectrum of World Bank Group activity.

We have also seen new innovative operations and major initiatives to promote gender equality. During his visit to the Great Lakes region in May, President Kim announced a ground-breaking project on gender-based violence, worth US$75 million, designed to prevent such violence and improve services to survivors. And in collaboration with the President of Niger, he issued a collective "Call to Action" on Women's Empowerment and Demographics in the Sahel. A US$200 million Bank pledge will support interventions in several key areas, including maternal and child health, and adolescent girls' education.

These advances are supported by concerted efforts to equip our staff with the necessary knowledge and training in gender. Over the past year and a half, more than 2,700 staff participated in learning opportunities and these efforts are now being further ramped up. We now have an established global network of over 180 Gender Focal points, located in 50 countries in the field and at headquarters. They are serving as resources to their colleagues on gender issues and play a variety of advisory and partnership roles.

Investments in knowledge remain a priority, at the country, regional and global levels. Work on our global report on Women's Voice, Agency and Participation is well underway and we are on track to launch the report at the Spring Meetings in April, with additional partner and regional launches to follow around the world. We launched enGENDER IMPACT, which serves as a gateway to World Bank Group gender-related impact evaluations, and distils lessons to facilitate access and sharing. Our companion to the World Development Report on Jobs 2013, Gender at Work, will be launched early in the new year.

The Bank’s pioneering Gender Innovation Labs are attracting much interest and gaining momentum. In the Africa region, we are already beginning to see how this can lead to real change. In Rwanda, pilot results led the Rwanda Natural Resource Agency and the Ministry of Gender and Protection of the Family to amend the regulations on joint land title design to include domestic partners, not just those with a marriage certificate.

Strong partnerships remain critical. Our Umbrella Facility for Gender Equality has allocated nearly $40m to activities that are pushing the frontiers of our knowledge, testing innovative approaches, and raising awareness and capacity among our partners and clients. In South Asia, it is supporting a Gender-Based Violence Knowledge Hub that will raise awareness, share knowledge, and create partnerships around this major challenge.

Our communications efforts are being strengthened, and we are expanding our outreach with social and conventional media, events, quarterly newsletters, and an upgraded and up-to-date Web site. Our most recent blog post memorializes the Delhi rape case one year on with the intention of maintaining global momentum in the fight against gender-based violence.

We are also looking ahead to a uniquely busy year with the Commission on the Status of Women meetings in March, ongoing discussions of the global targets that will succeed the anti-poverty Millennium Development Goals (MDGs) after 2015, and events surrounding the 20-year anniversary of the landmark International Conference on Population and Development in Cairo, which explicitly linked human rights and gender inequality to pervasive and extreme poverty.

The World Bank Group is undertaking a major restructuring exercise. Gender will gain prominence as one of several cross-cutting solution areas, alongside such priorities as climate change and fragility, conflict, and violence. It will be led by a senior director and strategically positioned to support multi-sectoral teams in order to push transformational solutions. A renewed gender strategy will be developed over the coming months.

Empowering Women through Evidence in Africa: A Video Presentation