Seventy eight year old Basavannevva Shelavadi peers happily through her foggy glasses at the new blue tap in front of the makeshift room in which she lives along with her young grandson. Although she first moved to the city 48 years ago, this is the first time that this frail woman has seen clean water gush out unceasingly at the turn of a tap outside her front door, and she cannot conceal her delight. “The water makes me so happy,” she beams.

Until five years ago, this scavenger slum on the outskirts of Dharwad town in northern Karnataka had only one tap for its teeming residents. And water flowed through it just once every eight to ten days.

Basavannevva, married when she was eight years old, would wake at four in the morning and walk for nearly two kilometers to reach the tap; there she would line up for hours to draw a small pot of water. Many a time the water ran out by the time her turn came, and fights were common. Even on days when she managed to fill her pot, the water was mostly rife with floating particles, making it unfit for drinking and cooking, even after a good boil.

Now widowed, alone, and dependent on her relatives to fetch water, the old lady bathed just once in fifteen days, an ordeal in the scorching summer heat of southern India. It was even more difficult for this devotee of the goddess Yellamma–the most favored deity in northern Karnataka–as she was unable to bathe before performing her morning prayers and applying the fresh red ‘tilak’ on her forehead as a mark of true worship.

Then, in 2008, things began to change. A World Bank project came on stream, providing 24/7 water supply in specific ‘demo-zones’ on the outskirts of three major Karnataka towns: Hubli-Dharwad, Belgaum, and Gulbarga. This was one of the first such experiments to bring uninterrupted water supply to an Indian town, where irregular water flows have long been the norm and citizens have had to devise an array of coping strategies to deal with the chronic shortages.

For Basavannevva, the regular access to clean water has been life-changing. “I can finally bathe every day and clean my house thoroughly,” says the determined lady, her spotless blue and white sari a testament to the hygiene she now enjoys. Her large extended family shares the common monthly bill of Rs.200, and feels it is a small sum to pay for the enormous difference the water makes to their lives.

A matter of pride

Down the road, 18 year old Pooja Gali and her 20 year old brother Praveen remember having to miss class to help their parents fetch water. Their father, a plumber with great aspirations for his children, felt dejected every time they missed school to fulfill this daily chore. Today, at a cost of just Rs.48 per month, the family gets a continuous supply of water at home, and the children are free to concentrate on their studies. “My children are the only ones in the slum to have completed their education,” exclaims their father proudly, “and what’s more, they are fluent in English too.” 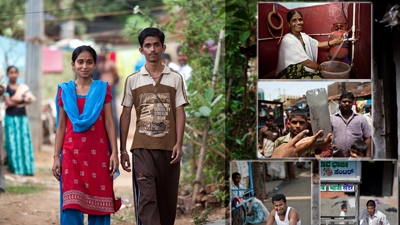 As ever-increasing multitudes of India’s poor and dispossessed throng into towns and cities in search of a better life, providing adequate and affordable services to the urban areas has emerged as a huge challenge for the country. Cities are adding some 10 million new residents each year and, with homes and shops springing up at an unrelenting clip on every available space, services providers are unable to keep pace. No Indian city has 24/7 water supply, and neither old residents nor new arrivals get enough water to cook and clean, wash and bathe. Sheer desperation often forces many to tap illegally into the underground water mains. But the haphazard jumble of joints that ensues mostly ends up sucking in dirty water, contaminating fresh supplies and bringing in illness and disease.

“This project was critical for the urban water sector in India. It demonstrated for the first time that providing continuous water supply was technically feasible in the country, something which was not widely accepted before the project began,” said Bill Kingdom, the World Bank’s team leader for the project. “It also showed that people, including slum dwellers, were willing and able to pay for the amount of water they consumed. Finally, it showed that partnerships between the public and private sector could benefit everyone.” The project owes its success to the dedication of all those who participated in its design and implementation, added Kingdom, emphasizing that a focus on educating and reaching out to customers was critical to build the people’s support for the new arrangements.

The project’s impact is evident in the demo-zones where round-the-clock water supply has improved life markedly. In Dharwad’s twin city of Hubli, Roopa Venkatesh Mali, a nurse by profession, beams with pride as she turns on the tap inside her house and a clear stream of water gushes forth.

Five years ago, Mali and her husband had to store their meager supplies of water in buckets and drums. Mali frequently missed work to collect water, and often faced the wrath of her boss for coming in late or missing work altogether. “I had a problem, my husband had a problem, and still the water was never enough,” she recalls.

Today, Mali has a continuous supply of clean water at a monthly cost of about Rs.68-78, which includes a payment of Rs.30 towards the cost of the meter. “I can now concentrate on my job and also work overtime,” she says with a smile.

" I use just one small jug of water to clean my entire stall. Still, I lose sales whenever there isn’t enough water to cook and clean properly. I can’t even open my shop on some days. "

Livelihoods have benefitted too. In Belgaum, 35 year old Noor Ahmed, a bubble-bottle seller, needs 15-20 pots of water a day to scrub his bottles and concoct the bubble solution. Before regular water supply came to his neighborhood, Ahmed would have to borrow two-three pots of water a day from homes in a wealthier row of houses nearby. But now that the family’s tap meets all his water needs, Ahmed has the time to fill more bottles and boost his sales.

Residents of areas that have yet to receive 24/7 water supply are eager for the same benefits. In Hubli, 55 year old Sharful Nisa, who struggles to meet the needs of her 13 member family, looks forward to the day when uninterrupted water supply reaches her home as well.

So too does 31 year old Srinivas D. Khamkar, a street-cart vendor selling fast food in Belgaum. Khamkar needs at least three barrels of water a day to manage his home and his cart–to keep it clean, wash utensils, and cook. “I use just one small jug of water to clean my entire stall. Still, I lose sales whenever there isn’t enough water to cook and clean properly. I can’t even open my shop on some days,” he says.

“Studies have shown that households in the demo zones now save 30-40 hours per month since they don’t have to queue up to collect their daily water supply. This is time spent with families or on productive work. All told, some 70% of residents reported less absenteeism from work. There is also less illness,” says the World Bank’s Bill Kingdom.

Given the project’s success, the Government of India has requested the World Bank for a follow-on project, building on the lessons learnt. “Our goal is for all the residents of these cities to reap the same benefits,” says Kingdom. “How will that affect the economy and well-being of the cities? That is what we hope to find out!”