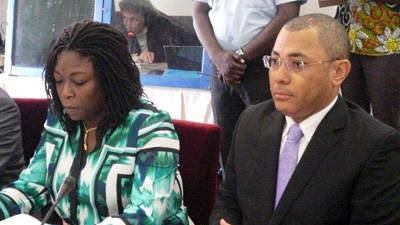 Zouera Youssoufou, Resident Representative of the World Bank in Gabon, attended a workshop on fiscal policy.

LIBREVILLE, May 21, 2013 - A seminar was held recently between World Bank experts and members of the Gabonese Government in Libreville, the capital of Gabon, to assist the country in identifying the weaknesses in its tax system and propose ways to improve it.

The seminar had four objectives: (i) to set up a neutral, transparent tax system; (ii) to enhance the competitiveness of enterprises by reducing their tax burden, if necessary; (iii) to improve the system of tax and customs incentives; and (iv) to simplify and modernize the procedures for the payment of taxes and duties.

The World Bank is supporting the reform of the tax system in a specific context. In 2011, in order to relieve the tax burden, the Gabonese Government decided to forego (by allowing exemptions) 46.4% of customs revenues and more than CFAF 200 billion in revenues in order to stimulate growth, with an emphasis on a considerable influx of private investment. At the same time, the Government eased the tax burden on enterprises by reducing the corporate tax rate from 35% in 2012 to 30% in 2013.

Thus, the challenge for Gabon is to find innovative ways to reform its fiscal policy while also meeting the urgent need to finance the country’s development; this effort may include simplifying the laws governing exemptions, preparing clear guidelines and manuals, developing an application form for exemptions, and streamlining the provision of online services.

In his statement, Luc Oyoubi, Minister of the Economy, Employment and Sustainable Development, noted that the workshop demonstrated the excellent level of cooperation between the State of Gabon and the World Bank. “Since January 2012, when the first service agreement was signed between the two parties, the World Bank has spared no effort to support Gabon in its pursuit of modernization,” he said.

Zouera Youssoufou, Resident Representative of the World Bank in Gabon, reaffirmed the Bank’s availability and commitment to continuing its support for the development process and poverty reduction in Gabon. “To make the investment climate more attractive, Gabon should focus on replacing its current discretionary system of tax incentives, composed of special decrees, agreements, and conventions, with a more transparent system where incentives and clear qualification criteria are included in the tax and customs codes,” she suggested.  In her view, Gabon should take advantage of its chairmanship of the Economic Community of Central African States (ECCAS) to promote the revision of the common external tariff (CET) for ECCAS members.

Gabon aims to transform the country into an emerging economy by 2025. This strategy will require considerable financial resources, in particular to enable the State to finance transport, energy, and communications infrastructure. The business climate needs to be improved so as to attract private investment in the production sectors. In this context, the Government believes that the tax system will play a central role in the mobilization of public funds.