Thailand: Sustaining Health Protection for All

50-year-old Somjai Trisirithanachote, a housekeeper who works at a building in Bangkok, was ill for several months.  “A health advocate told me about the Universal Coverage Health Scheme (UCS) and I applied for it. I went to a public hospital using the UCS card and the doctor there found the cause of my illness, hypertension. My health improved significantly after visiting the hospital twice,”

Ms. Trisirithanachote is one of the many Thais who has benefited from the UCS. Initially, under the scheme, no patient paid more than Baht 30.00 (about US$1.00) per visit to accredited hospitals and health centers for inpatient or outpatient care, including drugs. In 2007, the co-payment was abolished and UCS became free. As a result, Thailand was able to make healthcare more accessible to all and reduced the burden of health costs on the poor. 99.5% of the population now have health protection coverage. In addition, Thailand also saw an improvement in two-year survival rates for cancer and heart attacks. While Thailand’s health system achievements are undeniable, it is facing three challenges.

Inequalities in the health system

The UCS may have made healthcare more accessible to a significant share of the population but, even with universal coverage, inequalities persist. The distribution of health workers and other resources vary across geographic areas. In addition, Thailand has two other health financing schemes and the benefits differ from one another. For example, spending for the elderly under the Civil Servant Medical Benefit Scheme is four times higher per patient than those eligible only for the UCS.

Thailand may have achieved universal coverage with low levels of spending on health but, unlike other middle income countries, a high share of spending on health is shouldered by the government. Government health spending as a share of GDP has nearly doubled- from 1.5% in 1995 to almost 3% in 2008. Costs are being driven by rising spending in the UCS and other health schemes due to the growing number of chronic diseases, an aging population, and more.

“The steadily increasing government budget share allocated to health will be difficult to sustain in the long term,” says Dr. Sutayut Osornprasop, a human development specialist from the World Bank office in Bangkok and one of the authors of the Thailand Public Financial Management Report Discussion papers.

He adds: “The government and other health stakeholders recognize the growing costs and have put into place some measures to deal with these. Some examples are better payment arrangements  and an increased emphasis on disease prevention and health promotion. However, more could be done.” 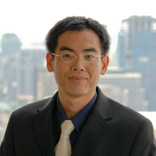 Dr. Osornprasop says that there could be a greater focus on hospital efficiency and more measures to deal with the unequal distribution of health facilities and staff.

Thailand’s health spending is spread across several ministries, government agencies, public insurance schemes, and local governments. These groups then use a variety of means to channel funds to health providers and local governments to finance health services. As a result, administrative systems duplicate and inefficiencies stem from the differences in administration, payment, reporting, and monitoring.

“There is a need to establish clearer roles and responsibilities of local governments and the Ministry of Public Health. Under the forthcoming Third Action Plan for Decentralization, Thailand should be able to systematically delegate different functions (such as disease prevention, health promotion, and health-related social and community functions) to various agencies. Mechanisms for better central oversight and accountability can also be established,” says Dr. Osornprasop.

Thailand can be proud of its achievements in the health sector but there’s a need to avoid complacency in addressing its challenges. Fortunately, Thailand has a strong capacity for health system analysis and stakeholders in government and active civil society are pushing for public dialogue on health issues. As such, it is well-placed to manage complex choices for its universal health scheme.