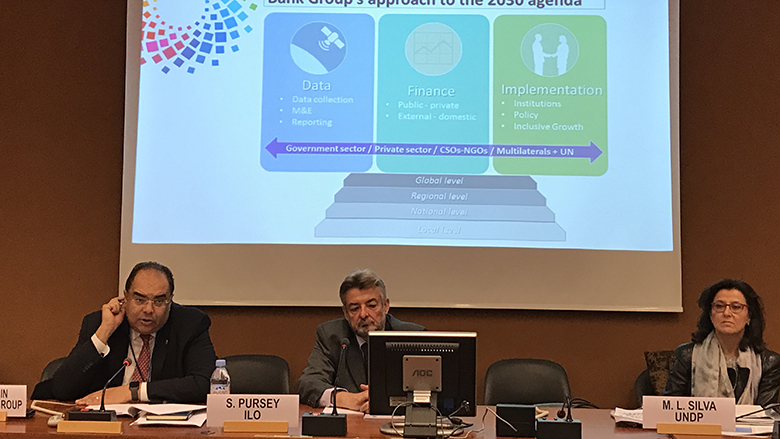 The seminar discussed the main lessons learned from the MDG Reviews conducted by the UN System Chief Executives Board(CEB)for Coordination between April 2013 and November 2015.  In November 2012, the UN System CEB, under the SG’s chairmanship, and at the proposal of WBG President, Jim Yong Kim, expressed a determination to step up action to accelerate progress towards the MDGs. The findings are summarized in a joint UNDP- WBG publication, “Transitioning from the MDGs to the SDGs”.  The exercise, which brought together the UN and the WBG staff, compiled the country situation, identified bottlenecks to attainment, and suggested potential solutions in 16 countries and 1 sub-region.  Many of the observations and proposed solutions are very relevant for the implementation of the 2030 Agenda.  As introductory remarks, moderator Pursey described the report as being a frank account of the UN system and the difficulties faced by countries.  Senior Vice President Mohieldin focused its intervention on the main bottlenecks to success, paying particular attention to the use of policy instruments and the interrelatedness of the goals.  He stressed that the current development trajectory of most countries will not allow for the attainment of the SDGs but he reminded the audience that “trajectories can be changed with the right policies and development strategies”.  On the other hand, UNDP Director Silva, analyzed the impact and meaning of such exercise for the UN system as whole.  Both reminded the importance of “good vertical expertise with horizontal coordination”.