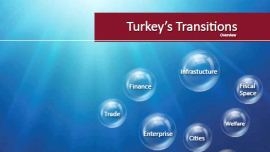 Conference: Learning Development Lessons en route to High Income
December 10, 2014Istanbul
The World Bank Group will present the key findings of the new "Turkey's Transitions" report to a large group of policy makers from Turkey and a number of countries, and discuss ways for Turkey to sustain growth on its path to high income.

Turkey’s economic success and the achievements in social progress have become a source of inspiration for many developing countries worldwide. In recent years, delegations of policy makers from countries as far flung as India, Uzbekistan, Tajikistan, Malaysia, Mauritania, Iraq, Kosovo, Tunisia, Kenya, Pakistan and Ukraine have come to Turkey to learn about topics as diverse as the primary health care reform, the expansion of secondary education, removal of energy subsidies, regulation of telecommunications, banking restructuring, social housing, or public finance management.

What lessons can be drawn from Turkey’s experience? An assessment of what has worked well and what needs to change for Turkey to continue on its growth path is offered in the book “Turkey’s Transitions: Integration, Inclusion, Institutions”. The key findings from this book will be presented at the launch on December 10 in Istanbul.

Turkey’s average real income has risen fivefold since the 1950s. This progress towards high income has given rise to a growing middle class. In Turkey's transitions - marked by solid growth and shared prosperity - integration and inclusion have played a central role.

The trade liberalization and the Customs Union with the European Union have facilitated Turkey's rising global presence. Turkey’s trade has been growing around 50 percent faster than world trade in the last decade alone. Furthermore, at a time when the world worries that it may be running out of work for millions of young people coming into the labor market each year, Turkey can boast of an impressive record of job creation.

Turkey’s economic progress has gone hand in hand with improved social outcomes, especially in health and education. For example, life expectancy has increased by over 10 years since the 1990s, while infant mortality rates have fallen six times. Since 2003, Turkey’s average Programme for International Student Assessment (PISA) scores improved more rapidly than among any other country participating in the survey.

Despite its dramatically increased weight in the global economy over the past decades, Turkey has yet to cross the barrier to high income – currently some 20 percent shy of the high income threshold defined by the World Bank.

Is Turkey now stuck in transition? How can the country avoid the so-called ‘middle income trap’? This will be the focus of a panel discussion during the launch event.

Questions have been raised over the strength of Turkey’s legal and economic institutions, and economists are concerned that Turkey may remain “trapped” in its current middle income status. Because of its young population, an improving education attainment and the remaining substantial investment opportunities, Turkey is likely to graduate to high income status over the coming decade, possibly by 2017. The speed of convergence with the living standards of the advanced economies will depend on the policies chosen.

by Martin Raiser, Country Director for Turkey, The World Bank

Yavuz Canevi, Forum Istanbul  President, TEB Chairman of the Board

Pawel Samecki, Member of the Board, National Bank of Poland