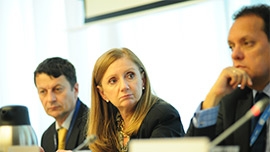 World Bank Group at the WTO Public Forum
October 1, 2014Geneva, Switzerland
The World Trade Organization (WTO) Public Forum is the WTO’s annual, large-scale outreach event for engaging with civil society, business and other stakeholders on trade issues. Since the first Forum was held in 2001, more than 9,000 representatives from NGOs, civil society, academia, business, the media, governments, parliamentarians and inter-governmental organizations have attended.

“The Bank Group attaches great importance to being involved in global dialogue on trade issues,” said Ms. Anabel González, the Senior Director of the Trade and Competitiveness Global Practice at the World Bank Group (WBG). “We know that trade has been a powerful engine for economic growth and poverty reduction in recent decades. As we look around the world, we know that all countries that have really made a significant step forward in reducing poverty have harnessed integration into the global economy to achieve this.”

Increased trade in agricultural products has great potential to lift people out of poverty and to enhance the growth prospects of developing countries.  The participation in trade of small scale producers, especially in agriculture, is determined by a nexus of transport and border infrastructure, financial and other services and information flows.  Chairing the panel of the WBG-organized session entitled - Improving trade competitiveness in Africa: Making trade work for the poorest, Ms. González was joined by H.E. Mr Minelik Alemu Getahun, Ambassador of Ethiopia to the WTO, Mr. Arne Cartridge, Senior Director of Grow Africa, World Economic Forum, Ms. Aurélie Oberti, Global Sustainability Manager at Barry Callebaut, Mr. Ricardo Melendez-Ortiz, CEO of the International Centre for Trade and Sustainable Development (ICTSD), and Mr. Paul Brenton, Lead Economist at the Trade and Competitiveness Global Practice of the WBG. The discussion focused on facilitating greater participation of small scale producers in developing countries in regional and international trade, and also highlighted some new work the Bank Group has done on improving trade outcomes for lagging regions and the importance of addressing local investment climate issues, trade costs, trade infrastructure bottlenecks and firm level competitiveness.

The World Trade Organization (WTO) Public Forum is the WTO’s annual, large-scale outreach event for engaging with civil society, business and other stakeholders on trade issues. Since the first Forum was held in 2001, more than 9,000 representatives from NGOs, civil society, academia, business, the media, governments, parliamentarians and inter-governmental organizations have attended. This year the Public Forum theme was “Why Trade Matters”, with the objective of linking trade policy issues with concrete issues of wide interest to the diverse stakeholders. Under this thematic umbrella, three sub-themes were covered: trade and jobs; trade and consumers; and trade and Africa.

Ms. Anabel González also presented the key findings during the Geneva launch of a World Economic Forum Global Agenda Council on Trade & Foreign Direct Investment report - Mega-Regional Trade Agreements: Game-Changers Or Costly Distractions For The World Trading System?. She was joined by H.E. Jonathan T. Fried, Permanent Representative of Canada to the WTO, and Mr. Richard Samans, Managing Director at the World Economic Forum, who provided the opening remarks to the session. Mr. Richard Baldwin, Professor of International Economics at the Graduate Institute of International and Development Studies (IHEID) gave an overview of the economic and systemic impact of mega-regionals, while Mr. Peter Draper, Senior Research Fellow, Economic Diplomacy Programme at the South African Institute of International Affairs and Mr. Jean-Pierre Lehmann, Emeritus Professor of International Political Economy, at IMD discussed the regional impact of mega-regionals. H.E. Gabriel Duque, Permanent Representative of Colombia to the WTO shared his experience on promoting convergence between mega-regionals & the WTO.