.Inequality between women and men may be costing Uruguay 13% of its GDP per capita. If women participated in the labor market as men do, Uruguay’s GDP could rise up to 13%. Uruguay could generate up to U$ 2,100 more per person.

Women don’t have the same job opportunities as men and earn 31% less for doing the same work.

This new campaign combines facts with the stories of different Uruguayan women, all of which share the same narrative: facing inequality and the labor market as women.

#MujeresUruguay aims at raising awareness of this issue in Uruguay and giving voice to these stories, which can be told by thousands of Uruguayan women.

Data presented in the #MujeresUruguay campaign are part of “Jugar un partido desigual”, a report in which the World Bank diagnoses Uruguay’s current gender situation.

The study analyzes several sectors in which women face barriers or inequalities, such as quality of employment, economic opportunities, pay gap, aging, education, violence, decision-making and care work, among others.

The report aims at aiding conversation and reflection. The benefits of closing gender gaps aren’t exclusive to women. Neither is the responsibility.

Changing this reality requires us all to make an effort. The first step to closing these gaps is gaining access to reliable data on the issue:

Why is this so important for Uruguay’s future?

Efforts aimed at supporting a gender equality agenda are primarily justified by achieving a more inclusive and fair society that guarantees access to the same opportunities, regardless of origins and individual features- for instance, gender. At the same time, gender equality can also be greatly beneficial from an economic point of view.

As mentioned earlier, Uruguay still doesn’t know how to make the most out of the productive resources of a great part of its working age population. Women participation in the labor market (55.8%) is still below men’s (73.7%). Those who do participate in the labor market face a glass ceiling, earn less than men, and are less likely to be employers. In addition, women are less likely to work in science and technology. Both realities combined restrict Uruguay’s opportunities. 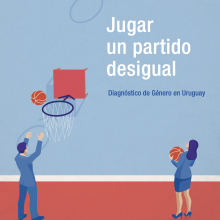