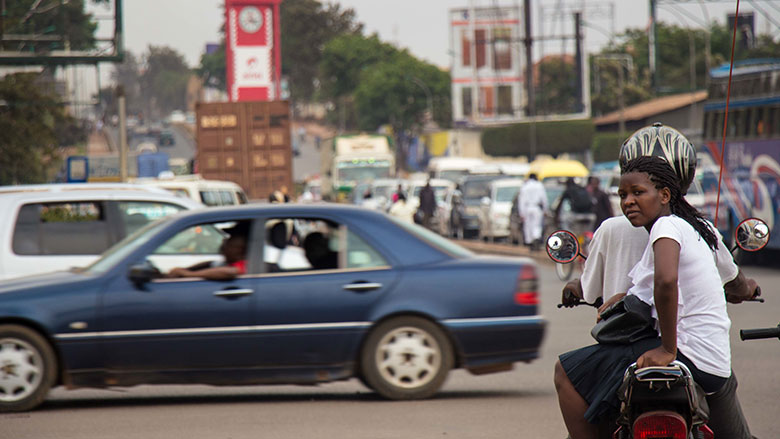 Boda-Boda and passenger wait for the traffic light at the Jinja Road Junction in Kampala, Uganda

According to the Country Economist and Co-Task Team leader of the SCD, Jean-Pascal Nguessa Nganou, Uganda has had impressive development gains but there are strong indications that drivers of past progress are not sustainable.

The SCD is a result of national consultations by the World Bank as part of the process of developing the upcoming Country Partnership Framework (CPF) for Uganda. The consultations provided important input from various stakeholders about the progress made toward the World Bank’s (WB) twin goals of reducing poverty and boosting shared prosperity in Uganda, and identifying the key priorities for making further progress.

The WB engaged in consultations with a large and diverse group of stakeholders during February to July 2015. The stakeholders included government officials (both political and technical) at the central and local government levels, private sector, civil society, communities at the grassroots and donors. Engagement began with the political and technical teams who are largely involved in the planning and design of programs for certain specific objectives. This was followed by donors and CSOs who monitor results from an independent view, and finally the communities who are the direct beneficiaries of the outcomes.

The selection of Local Governments was informed by the need to address the social, cultural, and development diversities in the country. For example, Buliisa and Kotido districts are in hard to reach areas with poor infrastructure and limited development, yet they have great opportunities and potential for the future. The two districts also bring out the effect of cultural orientations on development as most of the people were inclined to a non-diversified source of livelihood.

In northern Uganda, Gulu district and Municipality, and Kotido district in the North West, were selected to represent a post-conflict situation. In this region, the recovery and reconstruction efforts may have contributed to the mixed results. Whereas the World Bank has supported the reconstruction of northern Uganda, following the 20-year civil war, though poverty has declined, both welfare and vulnerability have not improved according to the feedback and physical observations.

Two other districts of Bushenyi (in the West) and Mbale (in the East) represented areas which have had peace over the last three decades, are highly accessible in terms of infrastructure, have relatively high levels of education and social amenities. However, these districts also portrayed a need for new approaches to the development process given the numerous social economic problems identified during the consultations.

The report noted that Uganda’s physical and social economic progress over the last three decades represents a mixed bag of positives and negatives. While major milestones have been achieved in terms of growth, primary school enrollment and access to health services, the report notes that stakeholders still present strong concerns about inclusiveness of the growth, sustainability of progress made as well as quality of services.

Recommendations from the report for prioritization include:

Priority areas: The SCD identified 8 priority areas with a set of actions based on their linkages with the poverty story and the need to ensure continued progress on WB’s twin goals in the future. These priorities areas are:

Knowledge gaps: The proposed eight areas of priority pathways are derived from the SCD, and knowledge on Uganda accumulated over the years. It is also important that these priorities are flexible enough so they can be adapted as new knowledge emerges during implementation. Some of the knowledge gap identified during the SCD process include: