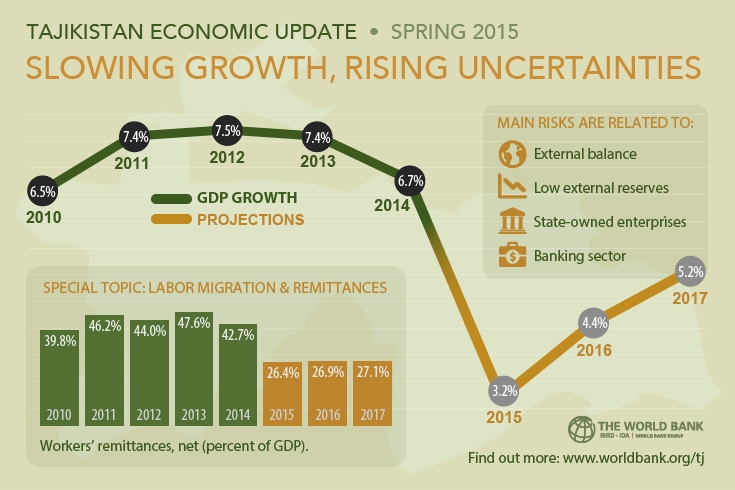 Lower remittances and terms of trade effects are causing a deterioration in economic growth in Tajikistan. GDP growth slowed to 6.7 percent in 2014, down from 7.4 percent in 2013, as remittances from Russia slackened, global demand weakened, and prices fell for the main export commodities of aluminum and cotton.

The current account deficit grew to an estimated 7 percent of GDP, due to a wider trade gap and lower remittances – although foreign direct investment increased slightly. Inflation started to accelerate as depreciation of the somoni led to higher food prices, while services costs rose due to tariff adjustments, reaching 7.4 percent at year-end 2014, up from 3.7 percent a year earlier.

The fiscal deficit narrowed to 0.6 percent of GDP due to both solid revenue performance and spending restraints. However, the situation in the financial sector worsened; many commercial banks are saddled with under-performing portfolios.

So far, policy responses have been mixed. On the fiscal policy side, the government continued its commitment to a generally balanced budget, while protecting social spending and postponing spending on categories deemed to be of lower priority.

Regarding the exchange rate policy, the National Bank of Tajikistan (NBT) responded to pressures by allowing a managed depreciation of the somoni and imposing administrative controls on the foreign exchange (forex) market. This ate into the NBT’s already low reserves and multiple exchange rate practices emerged.

Recently, the NBT allowed the official rate to depreciate faster in order to align it with the cash rate, but the gap between the two rates remains about 5 percent, while administrative controls on forex market also remain.

Economic growth is projected to slow to 3.2 percent in 2015 and then to recover gradually in the medium term – although not to recent historical averages. The expected steep drop in remittances (40 percent in US$ terms) will have a particularly adverse impact on services, which account for over 40 percent of Tajikistan’s economy.

Growth is also slowing in some of Tajikistan’s major trading partners – Turkey, China, and Kazakhstan –and a lack of demand will likely keep prices low on cotton and aluminum, the main export commodities. Growth is projected to rebound in the medium term – given responsible macroeconomic policies and a reasonable pace of structural reform.

Economic growth should be progressively higher toward 2017, although still below recent historical averages. The projected decline in GDP growth is likely to slow the pace of poverty reduction. The significant risks to the macroeconomic outlook mainly relate to the external balance, low external reserves, state-owned enterprises (SOEs), and the banking sector.

With the external environment highly uncertain and domestic pressures growing, the Tajik authorities are confronted with the need to transition to a more sustainable and inclusive growth model. In response to external pressures, the government has approved an action plan to reinforce its development strategy for 2015–16.

Prudent macroeconomic management must be a priority to assure the necessary adjustment, make the country more resilient to shocks, and lay a solid foundation for growth. High on the agenda are addressing financial sector vulnerabilities and assuring that SOEs are well-governed in order to minimize fiscal risks and deliver services to consumers in a cost-efficient way.

The business environment also needs to be reformed in sync with comprehensive public sector reform.

In the short to medium term, policies to promote job creation in the private sector, which has been very limited since 2009, will be critical to facilitating absorption of returning migrants; in the medium term, more access to opportunities and basic services, such as education, water, sanitation, and heating, will be needed to ensure the sustainability of poverty reduction and of the monetary welfare gains achieved in recent years. 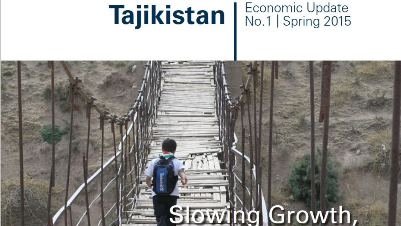