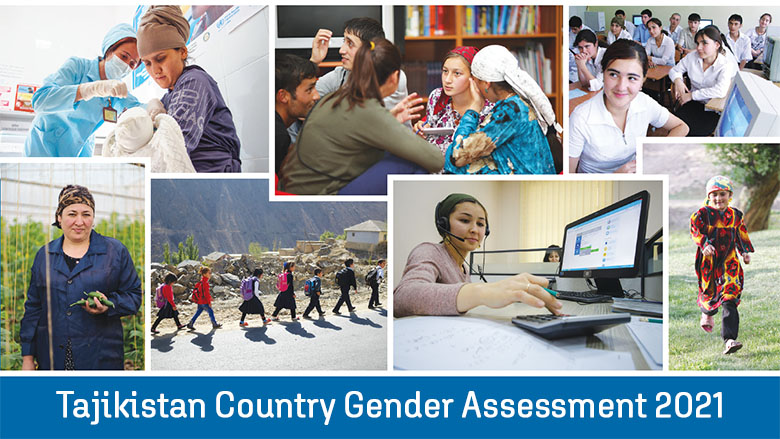 “Gender equality is more than a goal in itself. It is a precondition for meeting the challenge of reducing poverty, promoting sustainable development, and building good governance.”

A new World Bank report examines gender equality in Tajikistan, highlighting both achievements made and challenges that remain. The report is based on a desk study that draws upon data and information from Tajikistan’s national sources, the World Bank, and development partners, among others.

For example, according to 2016 data, about 69 percent of Tajikistan’s working-age female population were not working for pay and the share of employed women among the total number of employed was declining steadily. Records show that, economy-wide, women earned 60 percent of what men earned in 2017. Female-dominated sectors such as education tend to be lower paying than male-dominated sectors such as economics, industry, construction, and transport.

Men in Tajikistan outperform women on all aspects of the human development index, with the notable exception of health. Female life expectancy at birth (73 years in 2017) is greater than male life expectancy (68.5 years) by 4.5 years. Maternal and infant deaths are decreasing in Tajikistan, with boys having a 97 percent chance and girls a 96 percent chance of surviving until their fifth birthday.

Gender inequalities in accessing Water Supply, Sanitation, and Hygiene (WASH) services in Tajikistan negatively impact women and girls’ education and health. The responsibility for collecting water from rivers, canals, and wells typically falls on women and children. Health risks can arise from carrying heavy buckets of water over long distances. In a 2016 household survey, 63 percent of respondents from households that collect water from sources outside their house stated that women are responsible for water collection. Young girls, under the age 15, comprised 15 percent of the responses.

Other internationally comparable measures such as UNDP’s gender inequality index have shown that, since 1995, women in Tajikistan have not been reaching their full human development potential. This is reflected in three dimensions of well-being: 1) reproductive health, 2) empowerment (measured by educational attainment and political participation), and 3) labor market participation.

However, there are signs of progress. Today, Tajikistan is seeing a decrease in maternal deaths, more women in parliament, and a higher share of women with at least some secondary education.

The report provides recommendations for how Tajikistan could achieve further progress in gender equality, with a focus on four priority areas: 1) Improving human endowments, 2) removing constraints for more and better employment, 3) removing barriers to women’s ownership and control of assets, and 4) enhancing women’s agency and voice, and engaging men.