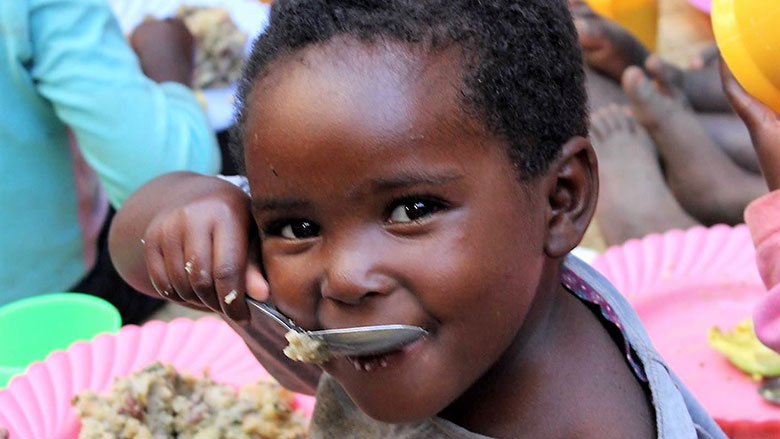 KIGALI, June 21, 2018 – Although Rwanda has met or exceeded most of its development goals, chronic malnutrition, or stunting, remains a major challenge.

The recently released 12th edition of the Rwanda Economic Update, Tackling Stunting: An Unfinished Agenda, notes that while stunting rates have declined gradually since 2000—and at an accelerated pace since 2010—they remain stubbornly high at 38% (2014-2015).

While stunting is widespread, the report notes that rates are highest among the poorest households and those living in rural areas, with modest improvements in stunting since 2005. The average annual rate of reduction for 2005–15 was 2% among the poorest wealth quintile, in contrast to 5% in the richest quintile, the report says.  Moreover, nearly 25% of children in the top two wealthiest quintiles also suffer from stunting.

Rwanda’s government has placed stunting high on its priority list, to be addressed under the Sustainable Development Goals, and is taking measures to turn the tide on stunting by involving key stakeholders. Food security, nutrition and early childhood development are prioritized as foundational issues in the National Strategy for Transformation and Prosperity (2017-2024). The government has set a bold target for all districts to reach a 19% stunting rate by 2024, in line with the country’s 2018-2024 Health Strategic Plan. A National Early Childhood Development Coordination Program was recently established under the leadership of Prime Minister Édouard Ngirente to ensure high-level coordination.

In partnership with the World Bank, the Power of Nutrition, the Global Financing Facility and the Global Agriculture and Food Security Program, a multi-sectoral stunting reduction program was developed. The program encompasses three projects in nutrition, social protection and agriculture totalling $184 million.

The recently-launched Rwanda Stunting Prevention and Reduction Project will support community-based approaches, improve the delivery of high-impact nutrition and health interventions, incentivize frontline community health workers and health personnel, strengthen accountability mechanisms, and promote a learning-by-doing approach to draw lessons on what works and how it can be scaled up.

The Strengthening Social Protection Project will scale up the main components of the Vision 2020 Umurenge Program (VUP), including innovations such as a gender and child-sensitive public works scheme, a cash transfer support targeting poor households with pregnant women and children under two, and strengthened Civil Registration and Vital Statistics system, including birth registration. The Sustainable Agricultural Intensification for Improved Livelihoods, Food Security & Nutrition Project, which is in its final design stage, will support the increase in agricultural productivity, market access and food security in targeted project areas.

“This is one of the most ambitious stunting reduction programs that the World Bank has supported,” said Meera Shekar, World Bank global lead for nutrition.