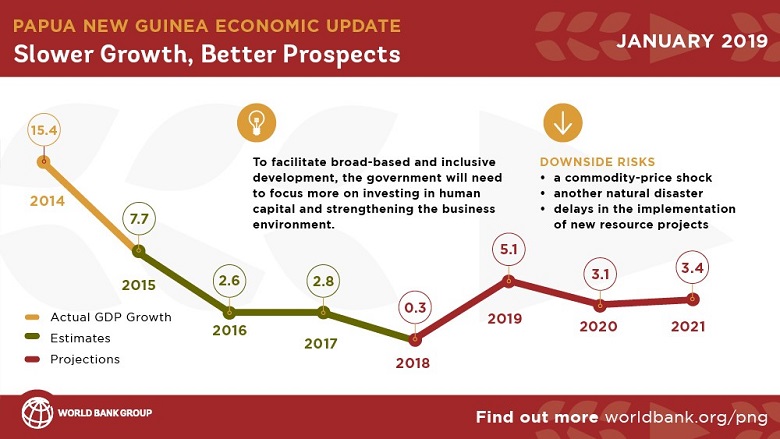 The February 2018 earthquake had a devastating impact on the economy and the population of Papua New Guinea (PNG).

The 7.5 magnitude earthquake led to a temporary disruption in the production of liquefied natural gas (LNG) and other mining activities concentrated in the highlands area, leading to a contraction in the extractive sector which almost fully offset the expansion of the non-extractive economy.

Preliminary estimates suggest that real GDP growth slowed from 2.8 percent in 2017 to 0.3 percent in 2018. This latest estimate stands in contrast with a pre-earthquake growth projection of 2.5 percent for 2018.

The earthquake also had far-reaching effects on many communities in the highlands area. The disaster is estimated to have claimed more than 100 lives, affected more than half a million people, and caused extensive damage to basic infrastructure.

Recognizing the economy’s dependence on the resource sector, the government has refocused its development vision on broad-based growth. The PNG economy has become increasingly concentrated in petroleum and gas-related activities since 2014, raising its vulnerability to external shocks including commodity-price shocks and natural disasters.

In recent months, the authorities have taken decisive action to promote greater diversification of the economy. First, in October 2018 the government adopted its new five‑year Medium‑Term Development Plan for 2018–22 (MTDP III), focusing on inclusive and sustainable growth. Second, in November 2018 the government announced the 2019 National Budget with a focus on supporting the implementation of MTDP III and building a broader-based economy.

Following the MTDP III plans, government spending in the 2019 National Budget will increase and will represent a deviation from the earlier-adopted fiscal consolidation path. Nevertheless, the 2020–23 indicative budget remains consistent with the Medium-Term Fiscal Strategy for 2018–22 which targets a substantial reduction of the fiscal deficit.

The government successfully tapped the international bond market to address the shortage of foreign exchange and finance its new development vision under the MTDP III. Following a roadshow to promote its debut sovereign bond, PNG raised a ten-year USD500 million sovereign bond (which was oversubscribed by seven times) in September 2018. Due to high demand, the bond interest rate was set at 8.375 percent, closer to the lower bound of a targeted range.

Ongoing reforms to strengthen the monetary and exchange rate policy and framework are expected to improve business confidence and increase private investment and growth in the non-resource economy. Measures include addressing the shortage of foreign exchange (FX), managing the liquidity effects of the use of FX to clear the FX orders backlog, working on greater exchange rate flexibility, considering options for strengthening the interest-rate transmission mechanism, and enhancing modeling capacity in the central bank.

Real GDP growth is forecast to rebound to about five percent in 2019, primarily driven by a return to full annual production in the extractives sector.

In the years after, growth is estimated to ease to 3-4 percent a year, until planned investments in LNG and mining projects kick in. Future large-scale investment in the resource sector appears likely, with plans to double LNG production and develop new gold, copper, and silver reserves.

With increased FX inflows into the economy, the current pressure on the exchange rate may reverse, adversely affecting the competitiveness of the non-resource economy.

To facilitate broad-based, inclusive, and sustainable development, the government will need to focus more on investing in human capital and strengthening the business environment to spur private sector development, as elaborated in the World Bank’s Systematic Country Diagnostic.

Boosting the development of the private sector will be essential to meeting the employment needs of the growing working-age population and ensuring more inclusive economic growth.

Dominated by foreign firms, the resource sector—which comprises the bulk of the country’s exports and has attracted crucial foreign direct investment —has been a strong performer since independence. However, owing to the high capital intensity of these activities, their prospects for significant job creation are limited.

In contrast, performance in the non-resource economy—where the majority of businesses operate and where most people earn their living—has been less impressive. These enterprises tend to be small in size, informal, and inward-looking.

Setting the non-resource economy on a more robust growth trajectory will be essential to creating enough good jobs to absorb the large number of young job-seekers entering the labor force in the coming decades.

Such actions could have substantial payoffs in terms of inclusive growth, economic diversification and job creation—especially in the agriculture, fisheries, and tourism sectors, which that are also highly inclusive of women and young people.

Attention should focus on alleviating key constraints to higher productivity and investment, including through regulatory reforms that remove real impediments to business activity. Care also needs to be taken to avoid reforms that inadvertently raise policy uncertainty and risks for investors.

Close collaboration with local and foreign firms (as well as potential new entrants) will be crucial in helping authorities identify the most significant constraints and opportunities, and thus where reform efforts should be targeted to achieve the greatest impact.