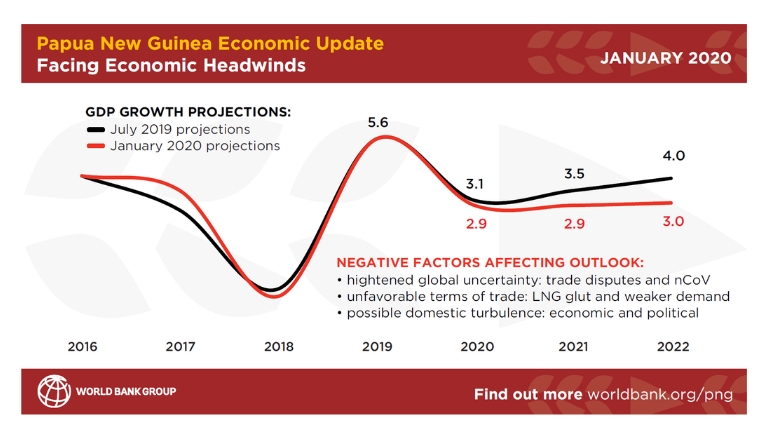 Real GDP growth recovered to 5.6 percent in 2019 (from -0.8 percent in 2018) driven by a rebound in the resource sector (mainly in its extractive segment, earlier affected by an earthquake) masking slower growth of the non-resource economy.

The slowdown in the non-resource activity was due to sluggish domestic demand as confirmed by a shortfall in non-resource tax revenue and lower inflation, while formal employment improved during the first nine months of 2019.

The growth outlook remains positive, but projected GDP growth rates are lower than our previous forecasts, mainly due to delays in finalizing agreements and launching implementation of large new resource projects.

The other major factor that impacted the downgrade in the growth outlook include heightened global uncertainty due to (i) a partial nature of the recent trade deal between the United States and China and (ii) a fresh emergence of new risks to Chinese and global growth, including a novel coronavirus.

A growing oversupply in the global liquefied natural gas market may also influence revenues in the extractive sector, with some negative implications for the non-resource economy.

As a result, real GDP growth is projected to hover around 3 percent on average in 2020­–22, with downside risks—including unexpected external shocks or potential domestic political and economic turbulence—prevailing.

The authorities have responded to the adverse economic environment through expansionary macroeconomic policy, which could complicate macro-fiscal sustainability

The government introduced a fiscal stimulus program in 2020, aimed at supporting domestic demand by investing in physical infrastructure for better connectivity by roads, ports, and telecommunications. The government will also continue addressing budget arrears accumulated by the previous administration.

These policies will lead to higher budget financing needs, to be covered from domestic and external sources. External borrowing should help to address a legacy of outstanding and incoming orders for foreign currency (a so-called FX backlog) while limiting a required adjustment in the exchange rate.

However, in the absence of fiscal buffers—since the sovereign wealth fund remains nonoperational—the anticipated fiscal expansion and increased net borrowing may undermine fiscal and debt sustainability. Keeping the Kina overvalued may maintain or increase the FX backlog, or lead to a drawdown of international reserves.

To improve macro-fiscal sustainability, it is important that the authorities resume fiscal consolidation and begin addressing the overvaluation of the Kina more decisively.

A recent referendum in the Autonomous Region of Bougainville—where the overwhelming majority of the population voted for independence—underscores the need to improve the inclusiveness of economic development.

The government recognizes that economic growth requires investments in not only infrastructure connectivity and physical capital, but also in human capital. Human capital are the health, knowledge, skills and resilience people accumulate over time.

The government’s commitment to becoming an early adopter of the World Bank’s Human Capital Project is an important milestone toward better and more efficient investment in the human capital of Papua New Guinea. 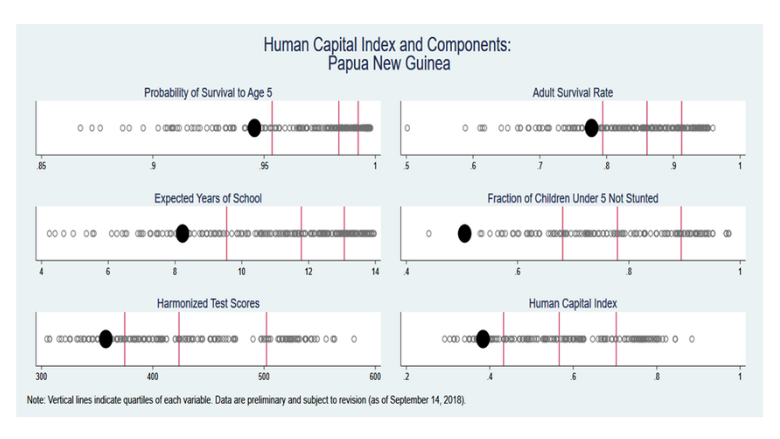 A child born in Papua New Guinea will be only 38 percent as productive when she grows up as she could be if she enjoyed a complete education and full health based on the Human Capital Index (HCI) score. Papua New Guinea’s HCI of 0.38 is below the regional average for East Asia and the Pacific (0.61) and is comparable to the regional average of Sub-Saharan Africa (0.40).

The quality of a country’s human capital stock is determined by the health, knowledge, and skills of its population.

PNG’s performance on the HCI and the challenges described in our analysis point to seven areas where critical action is needed to accelerate progress on human development:

The future growth and productivity of PNG will be determined by the investments the country makes in its children. Papua New Guineans born today will usher in the 22nd century and deal with new opportunities brought about by technology and globalization as well as new challenges wrought by climate change.

Good health, knowledge, skills and resilience will be vital for facing up to these opportunities and challenges. The government of PNG has in place a solid foundation in terms of policies and initiatives to strengthen human capital.

Going forward, the goal is to ensure that these policies are implemented effectively and adequately resourced. This will make it possible for PNG and all Papua New Guineans to achieve their full potential.