COVID-19 Impacts on Low Income Families in the Philippines 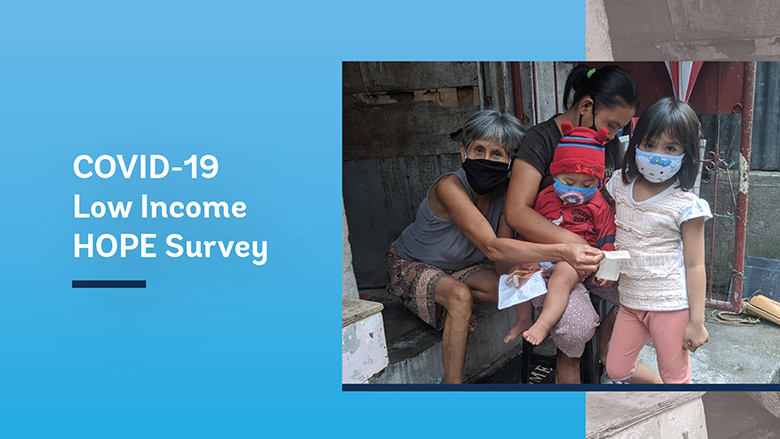 At the onset of the COVID-19 global pandemic, the Philippine government introduced a large-scale social protection program while placing the country on strict community quarantine. With the Bayanihan to Heal as One Act, the government provided emergency subsidies under the Social Amelioration Program or SAP.

Some 18 million poor and vulnerable households, comprising 70 percent of the population, were covered by the program. SAP beneficiaries included the 4.4 million households enrolled in the country’s flagship safety net program, the Pantawid Pamilyang Pilipino Program (4Ps or Pantawid), together with other vulnerable populations such as informal workers.

The COVID-19 Low Income Household Panel and Economic (HOPE) survey is a series of surveys that investigated the conditions of low-income households during the pandemic and the impact of the government’s social protection programs.  Using data from the same set of sample 4Ps households and non-4Ps low-income households, traced from December 2019 through October 2020, the COVID-19 Low income HOPE survey monitored people’s income and employment, food security, health, and education. It also assessed the role of social protection programs.

The survey was conducted by the World Bank and supported by the Australian Government. Results will be made available on this website for public use.

The COVID-19 Low Income HOPE survey comprised five rounds of panel surveys that yielded waves of panel data. The first survey, called Wave 0, was done in-person in December 2019, in collaboration with the World Bank East Asia and Pacific Gender Innovation Lab. Wave 1 was conducted over the phone in April 2020 during the peak of COVID-19 community quarantine; the same with Wave 2 in June, Wave 3 in August, and Wave 4 in October.

Blog: Realizing the “transformational trilogy” of social protection delivery in the Philippines