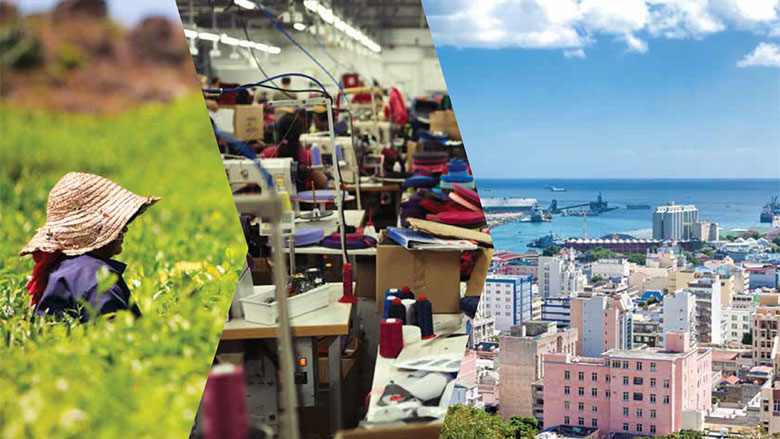 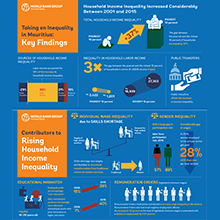 Infographic: Taking on Inequality in Mauritius.
Mauritius is often cited as one of the few African success stories and this is with good reason. Destined for economic failure in the aftermath of independence due to its high poverty level and other vulnerabilities, including high population growth, ethnic tensions, substantial unemployment, and an economy greatly dependent on the production of sugar for international markets, this small island nation turned the tide by diversifying its economy and accomplishing an unprecedented structural transformation from agriculture and textile into services, notably financial, real estate, and professional services. However, while the last decade was characterized by substantial economic growth, it was also marked by limited shared prosperity as the country’s economic model began to encounter its first challenges and inequality increased. Between 2001 and 2015, the gap between the incomes of the poorest and the richest 10 percent of households increased by 37 percent.

The report - “Mauritius: Addressing Inequality through More Equitable Labor Markets” - finds that household income from labor was the main culprit behind rising income inequality, accounting for 98 percent of the increase. This can be attributed to two main factors – demographics including households’ composition, mix, and characteristics, and the degree to which individuals marry within their own income group, and labor market factors including labor force participation and inequality in individual labor income. The relative expansion in the share of single-headed households and the disproportionate increase in labor force participation among women in the most affluent households played a role in increasing inequality. However, the single most important contributor was the growth in inequality of individual earnings, notably among males. On the positive side, the government’s effort to redistribute the benefits of growth through the social protection system was successful in offsetting the sharp increase in inequality in household labor income.

Inequality in household income increased, particularly in income from labor 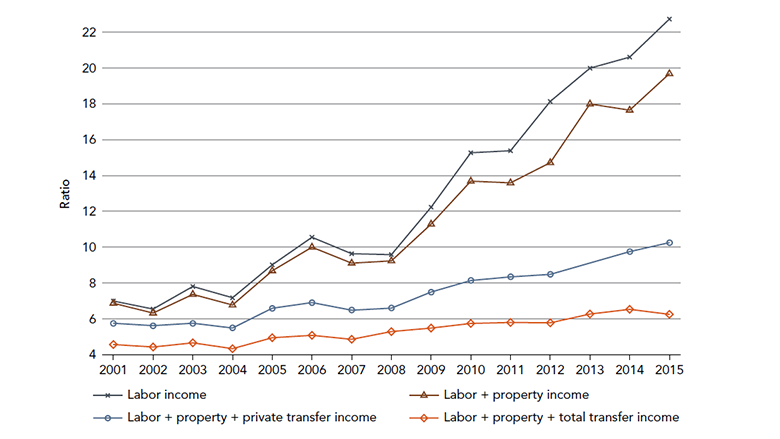 Source: Based on data of the Continuous Multi-Purpose Household Survey (CMPHS), Statistics Mauritius. Note: Each line shows the trends in the P90/P10 of an income aggregate.

The rapid growth in wage inequality can be attributed to the skills shortage created by structural changes that occurred in Mauritius over the last decade. The economy experienced a progressive shift from traditional and low-skills sectors including agriculture and manufacturing, particularly textiles, to services, notably professional, real estate, and financial services. This transformation generated a considerable increase in the demand for skilled workers that was not matched by an equally rapid increase in the supply of skilled workers, notwithstanding the significant improvements in educational attainments of the Mauritian population.

GRAPH: Change in distribution by sector of employment, 2004-2015 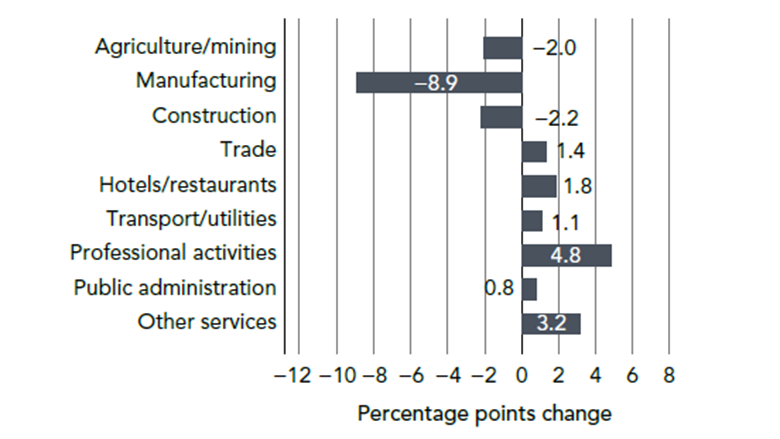 GRAPH: Change in distribution by occupation of employment, 2004-2015 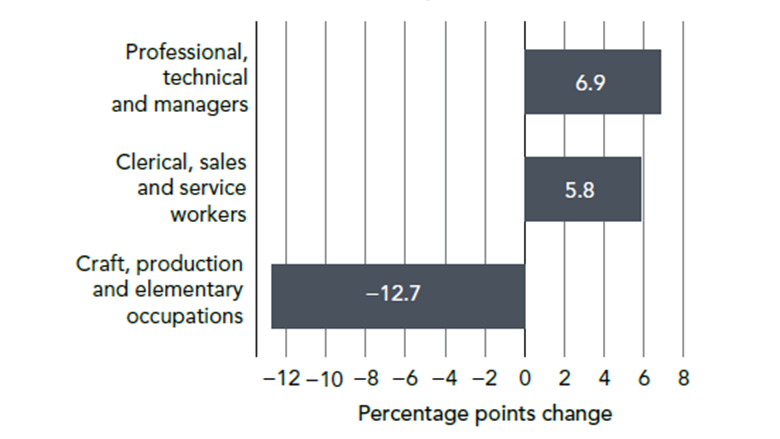 In addition to market forces, the complex system of Remuneration Orders contributed moderately to the rise in wage inequality. Remuneration Orders (ROs) are directives from the National Remuneration Board that set minimum wage rates and working conditions for private sector employees (The National Remuneration Board is a quasi-judicial body responsible for determining minimum wages and conditions of employment for various sectors and industries in the private sector.). Between 2004 and 2015, changes in legislated wages have been sporadic and modest, with the lowest legislated wages declining in real term in one out of three covered sectors. In addition, given the economic shift toward services and high-skilled occupations, low-skilled workers employed in traditional sectors covered by ROs recorded modest wage gains relative to high-skilled workers. ROs not only contributed, although modestly, to increasing inequality but also had a small negative employment effect in the covered sectors. Simple and enforceable minimum wage policies set at meaningful levels are key to successfully protecting low-wage workers.

Mauritian women are still substantially disadvantaged in terms of access to the labor market. Although women’s labor force participation increased steadily over the last decade and reached 57 percent in 2015, the gender gap is still large at a staggering 32 percentage points. The gap is partly explained by differences in age, educational level, marital status, household demographic structure—such as presence of kids and old family members. However, a considerable portion of the observed variation remains unexplained. This could be attributable to a number of factors including availability and cost of infrastructure for children and elderly care, strict working-time and leave regulations, and cultural values and social norms.

Women’s participation increased, but it is still considerably lower than men’s. Women are also paid less than men per hour worked in the private sector. 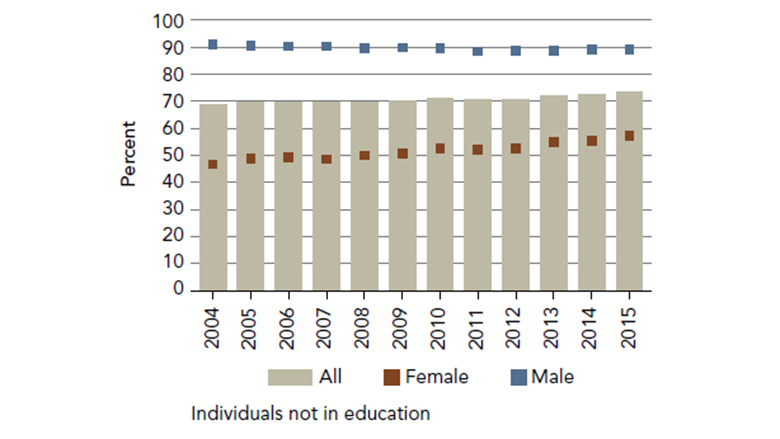 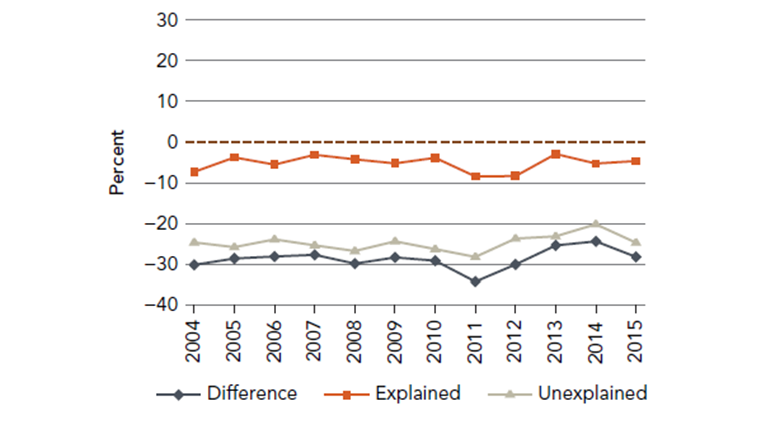 Mauritian women in the private sector are paid on average 30 percent less per hour than men. The gender pay gap in the private sector appears to be the by-product of two main factors. On the one hand, women employed in the private sector have less productive characteristics compared with men as women are disproportionately employed in traditional sectors and low-skilled occupations. On the other hand, the pay structure seems to favor men over women. To bridge the gender pay gap in the private sector, change needs to occur through the education system that should place a strong focus on curbing discriminatory social norms among the youth. The public sector instead is an attractive avenue for highly skilled women, who are on average paid more than males, and could serve as best practice of more equitable treatment.

In addition to the skills shortage, the Mauritian labor market is increasingly characterized by the education mismatch, particularly among youth, and by unemployment among highly educated youth. The education mismatch measures to what extent the educational level of workers does not match the educational level required in the jobs they perform. The percentage of “over-” and “under-educated” workers has been stable at about 47 percent over the last 10 years, yet the share of over-educated youth (aged 15-29) doubled between 2006 and 2015 with females spearheading this trend. In parallel, unemployment among youth aged 15-24 years has been thrice as high as the overall unemployment rate and significantly higher compared with that among individuals aged between 25 and 29. Unemployed youth are increasingly highly educated. In 2006, some 55 percent of unemployed youth (aged 16-29) had higher secondary education, and less than 7 percent had post-secondary or higher education. In 2015, the share of unemployed youth with higher secondary education had fallen to 42.5 percent, and the share of youth with post-secondary or higher education had jumped to almost 40 percent. A sizeable high-skills shortage along with rising “over-education” among employed youth, and expanding shares of highly educated unemployed youth calls for action. On the one hand, better targeted youth employment policies and more effective employment services can facilitate matching of labor supply and demand, while on the other hand, the education system is not providing workers, particularly youth, with the high-quality learning required by employers (A series of sector-specific surveys on labor shortage and skills gap conducted in 2011 indicated that employers do not easily find workers with the adequate technical and soft skills and past working experience for the job they offer. In 2016, employers reported educational inadequacy of the workforce as the third most problematic factor in doing business (based on survey conducted for the World Economic Forum’s Global Competitiveness Report 2017).) Skills acquired through Technical and Vocational Education and Training should be made relevant to a rapidly changing labor demand and attractive to a larger number of youth as they are often viewed as considerably less prestigious than academic education. 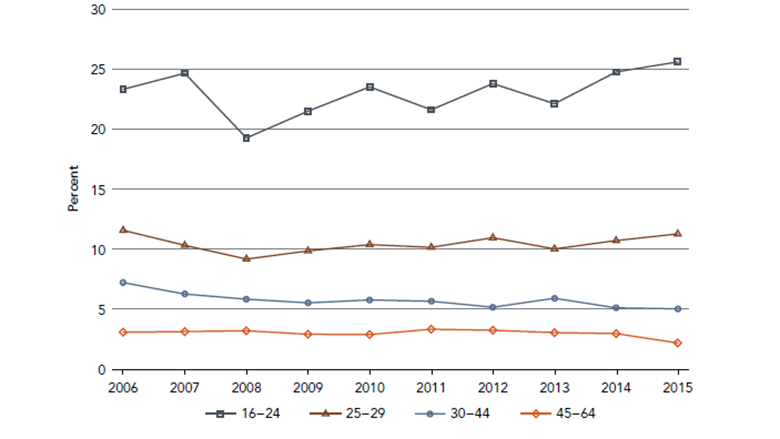 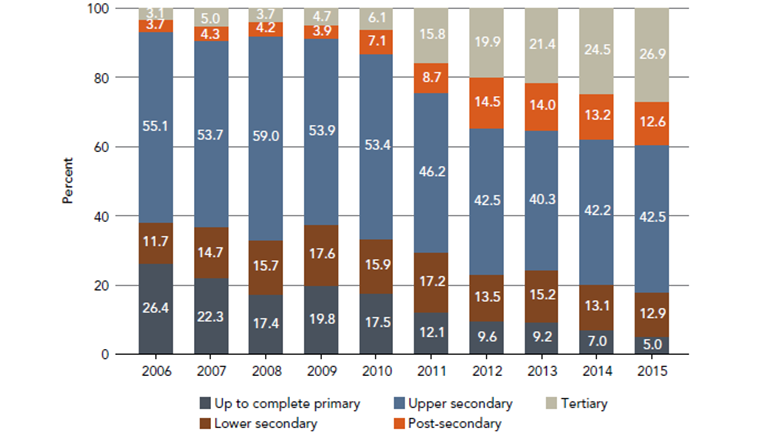