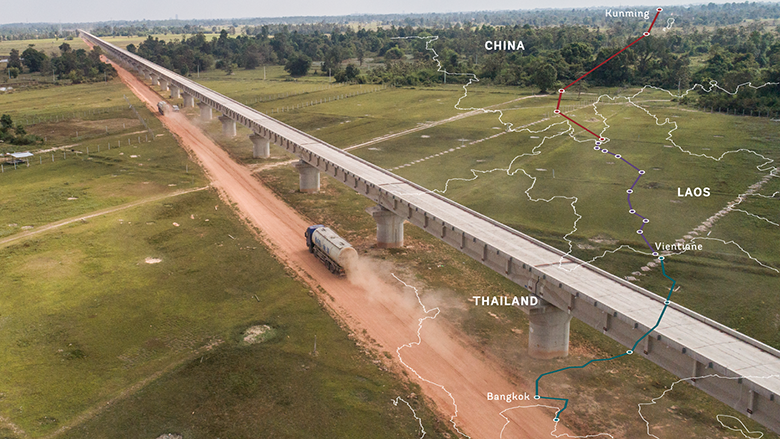 The Lao-China Railway is part of China’s Belt and Road Initiative (BRI). With the right reforms undertaken by the Lao government, the railway connecting Lao PDR (and later Thailand, Malaysia, and Singapore) to the vast BRI network could potentially increase aggregate income in Lao PDR by up to 21 percent over the long term. Designed as a high-speed railway, the 414-km section connecting the capital city of  Vientiane and Boten (at the northern border with China) could provide Lao PDR with a land link to global and regional supply chains, which could make the country more attractive to investors, create new jobs, and accelerate economic growth.

To achieve this, the government will have to undertake bold policy reforms to facilitate trade, improve connectivity, and simplify doing business. These reforms will be necessary to make the country more attractive as a new investment destination and link it to major production and consumption areas in China and the Association of Southeast Asian Nations (ASEAN), allowing firms to access global value chains. With efficient logistics services, Lao PDR could develop into a logistics hub, while targeted investments in agriculture and tourism could result in new export opportunities.

The construction costs of US$5.9 billion (one-third of Lao GDP in 2017) are shared between Lao PDR and China at a ratio of 30/70, but the high costs nevertheless present risks. Forty percent of construction will be funded through equity, with one-third provided by the Lao Government (partially funded through loans from the Export-Import Bank of China) and the remaining two-thirds funded by China. The remaining 60 percent of costs will be funded through loans taken on by the Lao-China Railway Company, a State- Owned Enterprise with 30 percent Lao and 70 percent Chinese ownership.

The success of the railway will depend on attracting enough cargo and passenger traffic, which will require a shift of transit flows between China and ASEAN toward rail. Currently, trade flows between China and ASEAN rely mainly on maritime routes, and trade between Lao PDR and China represents less than 2 percent of total China-ASEAN trade. The transit trade through Lao PDR along the railway corridor could reach an estimated 3.9 million tonnes per year by 2030, which would include a shift of an estimated 1.5 million tonnes of trade from maritime transport to the railway.

If Lao PDR implements complementary logistics and trade facilitation reforms, the railway could attract traffic that is currently using maritime and air transport routes and significantly reduce land transport prices by 40-50 percent between Vientiane and Kunming, China and by 32 percent between Kunming and the Port of Laem Chabang in Thailand once the Lao-China railway starts to operate in December 2021.

Lao PDR’s tourism industry could benefit greatly from an increase in demand for passenger rail traffic, which is expected to account for the majority of train traffic by 2030. The Lao government should focus on simplifying border clearance procedures to minimize delays, providing public transport facilities, and improving tourist attractions.

To fully leverage the benefits of the railway network, Lao PDR needs to improve its infrastructure connectivity including cargo handling equipment at railway stations and have sufficient road connectivity between stations and centers of production and consumption. The price competitiveness of the railway will depend on improvements in roads and more efficient logistics services, making it easier and cheaper to connect economic activity and consumption centers to the railway.

Encouraging competition by improving the regulatory framework and enforcement capacity will be critical in allowing private sector operators to provide efficient multi-modal transport services. Such services could connect the railway to production and consumption centers, especially in Lao PDR and Thailand, and could increase volumes on the railway. Allowing public access to rail infrastructure and establishing regulations for the use of containers would also be important for promoting healthy competition in rail freight logistic services.

Attracting additional flows from neighboring countries will also require establishing an efficient transit system and implementing further trade facilitation measures to reduce the costs of moving goods through (as well as into and out of) Lao PDR. In particular, customs and other border agencies will need to modernize operational practices, deepen existing regulatory transparency initiatives such as the Lao Trade Portal, improve coordination, and introduce effective risk management systems. Once processes, procedures, and non-tariff measures are simplified, increasing the use of Information and Communication Technology (ICT) could further improve the predictability of customs and other border agency requirements and processes, as well as reduce border clearance times and increase the predictability of processes.

The Lao government needs to improve border controls for passengers to avoid lengthy delays that could undermine the attractiveness of the railway for tourists and business travelers. Simplifying procedures and ensuring that enough customs and immigration officials are available to quickly process all passengers and their luggage will be essential. The government should also establish an efficient transit regime which is needed to improve the competitiveness of the trade corridor.

Allowing electronic submission of customs declarations and adopting the railway consignment note to act as the transit document, would improve the effectiveness of the transit system for goods. The ability to provide smooth transit services will be key in confirming the corridor’s value-for-money and making it an attractive option for the transport of goods between parts of ASEAN countries and China.