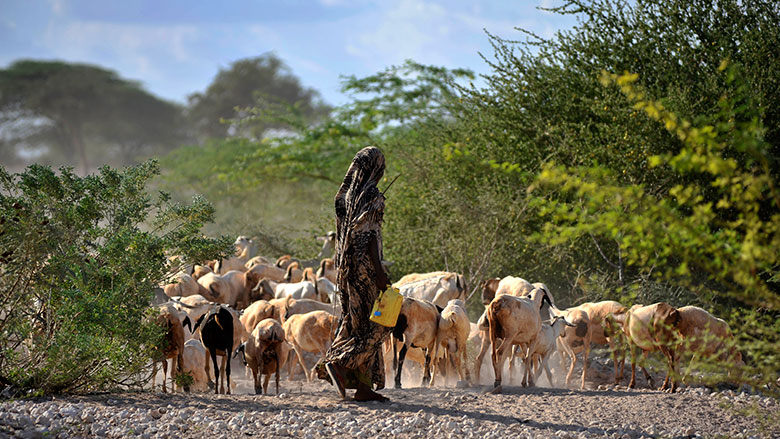 Drought in late 2016 and early 2017 knocked back Kenya's economic growth.

KENYA, December 7, 2017—A decline in the private sector's access to credit since 2015 partly accounts for the recent slowdown in Kenya’s economic performance, according to the 16th edition of the World Bank's Kenya Economic Update, Poised to Bounce Back? Reviving Private Sector Credit Growth and Boosting Revenue Mobilization to Support Fiscal Consolidation.

Election-related uncertainty also weakened private sector activity, further constraining its growth. The Kenya Private Sector Alliance says the sector lost an estimated $7 billion—equivalent to about 10% of Kenya's GDP—from the effects of the heightened sense of uncertainty the 2017 general elections created. Kenya’s economic is largely driven by the strong performance of its private sector.

Other drivers of the downturn were the poor seasonal rains that reduced crop production and limited the generation of hydroelectric power for much of 2017. The late 2016/early 2017 drought meant that food prices rocketed, and the electricity generation agency increased power tariffs, putting inflationary pressure on households and businesses. 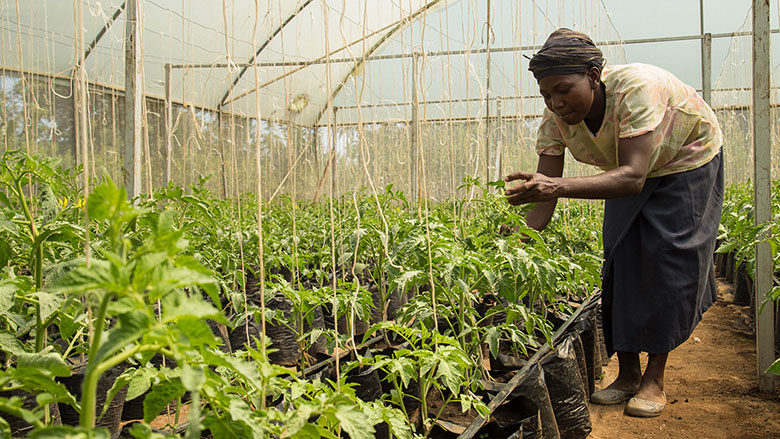 Food production for local and export markets is key to the of Kenya's economy. Photo: Dasan Bobo/World Bank

With agriculture a major source of employment and the largest single economic sector— accounting for 25% of GDP and roughly 50% of export revenue, according to the Kenya National Bureau of Statistics—drought has a huge impact on Kenya's economy. Farming is largely rain-fed, with worsening cycles of drought affecting food production for local consumption, as well as revenues, such as from tea.

As a result, Kenya’s GDP growth for 2017 is expected to drop to 4.9%, its weakest in five years. Despite this slump, activity has remained favorable to the East African regional average. This resilience has emanated from a rebound in tourism, strong public investment (particularly in infrastructure), and relatively low global oil prices.

In the medium-term, growth in the Kenyan economy is forecast to recover to 5.5% in 2018 and 5.9% in 2019, though this is contingent upon its implementation of supportive economic reforms and its prudent management of macroeconomic stability.

Key among these reforms is the need to facilitate and strengthen credit growth to the small and medium enterprises that have been the drivers of Kenya’s economy. Improved access to credit requires lowering the cost of credit, removing the interest rate cap, the universal adoption of credit scoring, and accelerating the collateral registry. 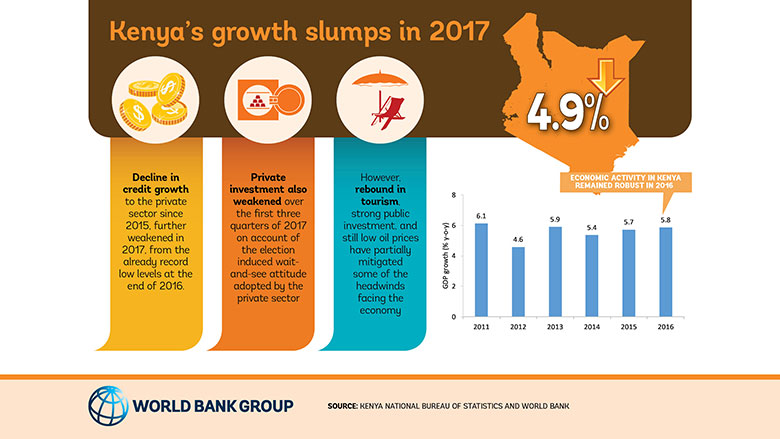 The slowdown in credit is attributable to a number of factors, such as diminishing confidence in the banking system following the failure of three key banks; a 2015/16 cash crunch; and a segmented interbank market. As a result, the outlook for a strong credit growth remains dim, given less demand, a regional slowdown in credit growth, and the rise of non-performing loans.

This edition of the Update also focuses on domestic revenue mobilization that is also supportive of  fiscal consolidation plans. Revenues have underperformed targets by an annual average of 3.7 percentage points of GDP since 2011, despite robust GDP growth. The Update notes that while a rapid rise in public expenditure has significantly contributed to Kenya’s deficit, the underperformance of revenues has also contributed to it.

The special focus of the Update recommends policy options that could enhance revenue collection for corporate tax and Value Added Tax. It recommends the rationalization of tax exemptions on corporate income tax; and on .

The country will also have to enhance revenue collection in sectors where losses are the greatest. The financial, health, manufacturing, and social work sectors account for 88% of total exemptions. Lastly, widening the tax base with measures to improve the tax register could greatly ensure more tax coverage.