Impacts of COVID-19 in Brazil: Evidence on persons with disabilities during the pandemic 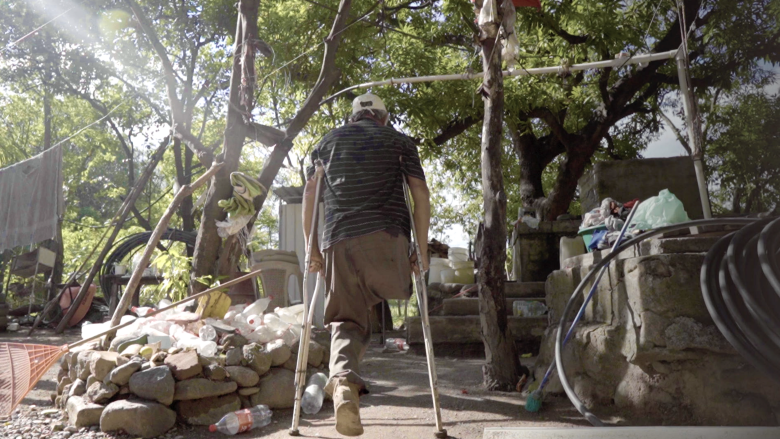 The effects of the COVID-19 pandemic range far and wide going from direct impacts on the economy and jobs to indirect effects of learning losses among children that are out of school. Brazil is among the countries most affected by the pandemic. After having experienced the largest drop in GDP (-4.1 percent in 2020) in recent history, the economy is recovering in an unbalanced way, with several labor market indicators still performing worse than pre-pandemic levels. In addition, impacts on human capital are still being accumulated as fewer children are engaged in educational activities (89 percent now compared to 99 percent before the pandemic) and only about 40 percent have face to face classes.

Unfortunately, the pandemic hit the most those that were already vulnerable. The COVID-19 effects on the widening of previous inequalities have been documented with for instance, those in low-skilled positions, lower access to technology, and who traditionally have borne the brunt of household work experiencing the larger losses. It is not surprising that households who were facing a challenging context fared worse and continue to suffer the consequences of the pandemic. Thus, it is ever important to shed light on some of these vulnerable groups and provide evidence on the magnitude of the effects of the COVID-19 pandemic.

This note focuses on households with members who are persons with disabilities. Data from a recent phone survey conducted across the region suggests that in 5.4 percent of households there is at least one person with disabilities1. In Brazil, a recent phone survey (Box 1) indicated that 7.3 percent of households had at least one member with a disability. These include households with members who have a lot of difficulty (4 percent of households) in any of the domains asked (vision, hearing, mobility, self-care) or are not able to carry them out at all (3.3 percent). About 9 percent have a member who experiences some difficulty in any of the domains asked (Figure 1).

Figure 1. Proportion of households with at least one member who is a person with a disability 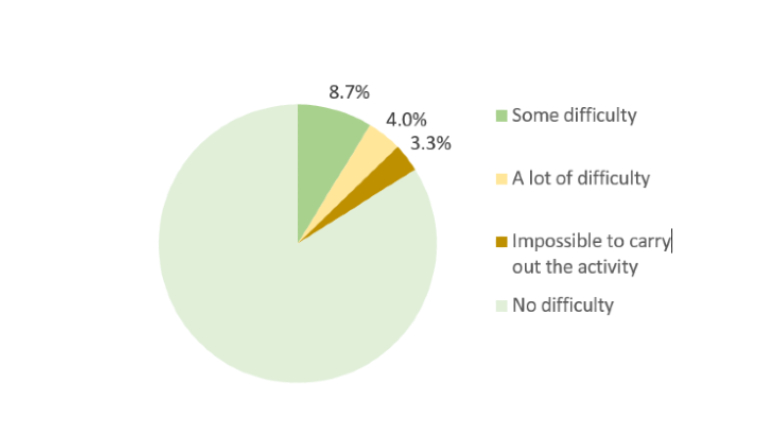 Figure 2. Monetary and non-monetary welfare indicators, by presence of people with disability in household 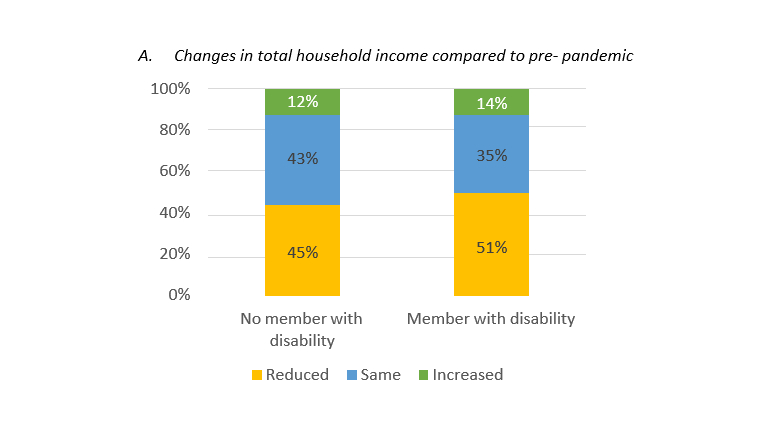 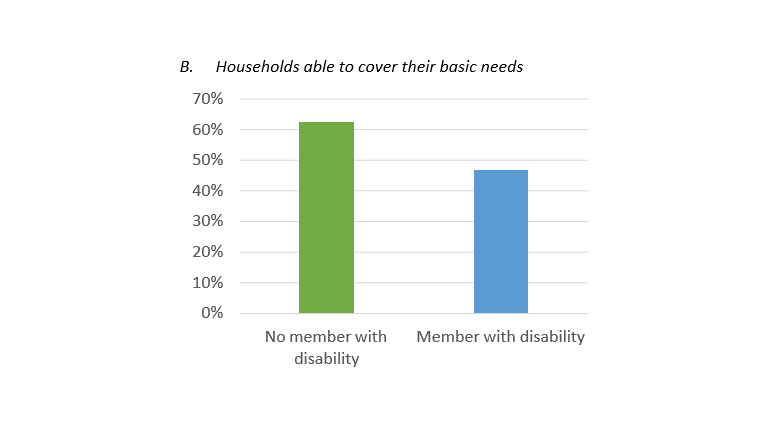 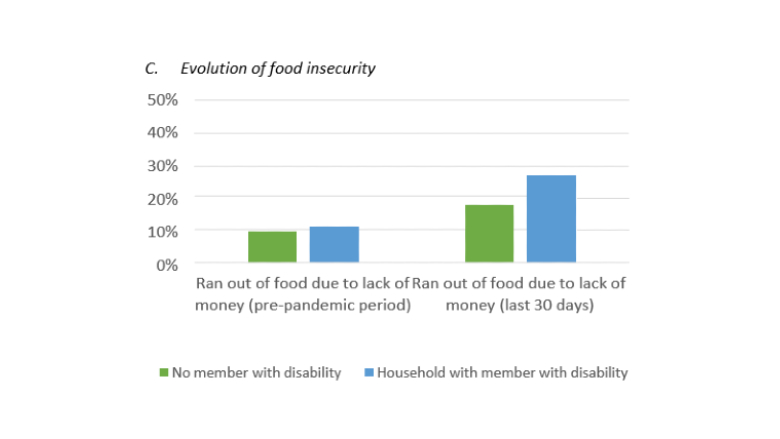 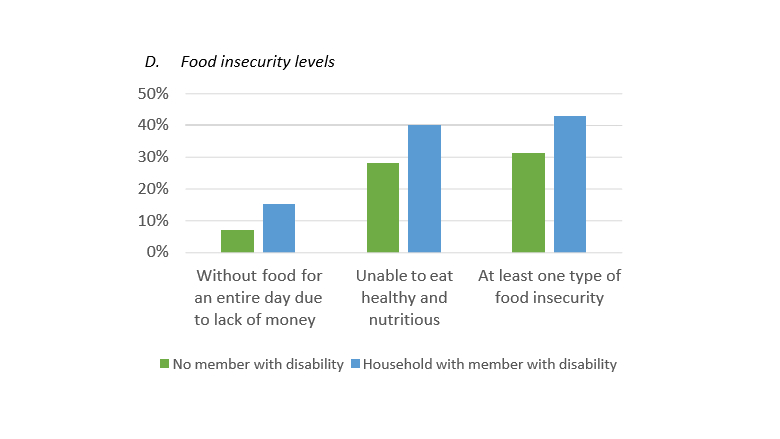 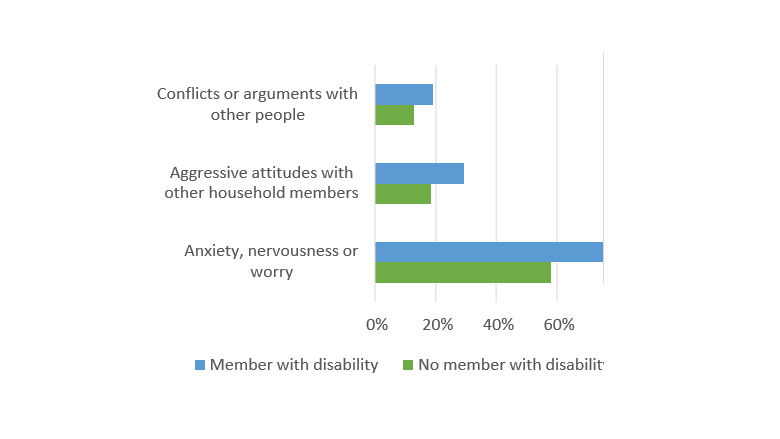 A recent World Bank report highlights the multifaceted exclusion faced by people with disabilities in Brazil and in the LAC region. The presence of persons with disabilities is highly correlated with poverty status of a household and low levels of human capital accumulation. While being far from showing the full picture of the current situation of households with persons with disabilities in Brazil, this note aims to provide some evidence on the worsening of their situation. It is germane that social protection policies continue putting a strong focus on the most destitute among the vulnerable populations. Through prioritizing support to these groups, the government can aim to have a more inclusive recovery.

1 Respondents reported that at least one member (5 years old or older) had a lot of difficulty or could not: see even with glasses, hear even with a hearing aid, walk, climb stairs, take a bath or get dressed on her own.

The Brazil COVID-19 Phone Survey is part of the World Bank – UNDP Latin America and the Caribbean High Frequency Phone Survey (LAC HFPS) Project. The 2021 LAC HFPS is conducting surveys in over 20 countries in the region. The survey collects information on a wide range of topics including labor market, access to health and education services, digital and finance, and gender-related issues. In Brazil, the survey was collected between July 26th and Oct 1st, 2021, resulting in a total of 2,166 completed interviews. The survey is nationally representative of the 18+ population who owns a phone.