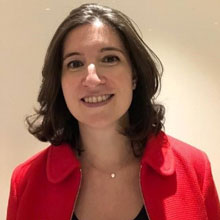 Tania Meyer is the World Bank Country Manager for Yemen. Prior to this assignment, she served as Resident Representative for Jordan where she established the World Bank Jordan Country Office.

Tania Meyer joined the World Bank in 2008 and has served since then in different capacities in the Middle East and North Africa region, in the Fragility, Conflict and Violence group as Team Leader for the Korea Trust Fund for Peacebuilding and in the Office of the Special Representative of the World Bank to the UN where she covered UN-WB collaboration  on post-conflict countries.

Tania Meyer also worked with international and local NGOs in Asia and Africa, including in Vietnam on school dropouts and street children, in China on rural education and in Uganda on HIV/AID programming.

A national of France, Tania Meyer holds a Masters in International Affairs and Economic Development from Columbia University and a Masters in Finance and International Business from Sciences-Po Paris. She is married and has a daughter.