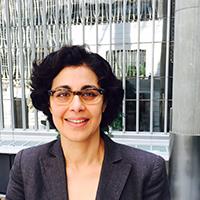 Sumila Gulyani is currently the World Bank’s Program Leader for Infrastructure and Sustainable Development in India. In this role, she coordinates the Bank’s work in seven practice areas—water, energy, transport, environment, agriculture, urban and social development—that together have an investment portfolio of about $23 billion in 80 projects.

Prior to that she was Global Lead for Urban Development Strategy and Analytics. From 2012-2014, she served as Manager for Water and Urban Development in Europe and Central Asia, overseeing a portfolio of $4 billion in 21 client countries. From 2008-2011, she lived in Kenya and worked on infrastructure and urban projects in 6 African countries. From 2005-2007, Gulyani was at Columbia University in New York as Assistant Professor and also served as the founding Director of the Infrastructure and Poverty Action Lab (I-PAL).

Gulyani received her Ph.D. in Economic Development and Urban Planning from the Massachusetts Institute of Technology, and also holds a graduate degree in architecture. She is the author of the book Innovating with Infrastructure and of several articles on urban development, water, electricity, transport, and slums.