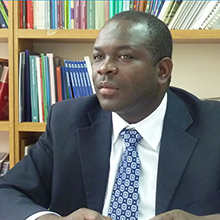 Souleymane Coulibaly is the Lead Economist and Program Leader for Equitable Growth, Finance and Institutions Practice Group for Brunei, Malaysia, Philippines and Thailand. Before moving to Manila, he was the Program Leader and Lead Economist for Central Africa covering a diverse set of countries: Angola, Cameroon, Central African Republic, Congo, Democratic Republic of Congo, Equatorial Guinea, Gabon, Nigeria, and Sao Tome and Principe.

He joined the World Bank Africa Region in January 2014 from the Operation and Policy and Quality Unit (OPCS) where he was covering Development Policy Lending and Guarantee policies and operations, and represented the unit in the Non-Concessional Borrowing Policy committee. Before OPCS, he was in the Eastern and Central Asia (ECA) region working simultaneously as trade economist and country economist of some former Soviet countries (Armenia, Kazakhstan, Kyrgyzstan and Tajikistan), as well as ECA regional trade coordinator. Before joining the World Bank as a Young Professional in September 2006, he used to be lecturer at the Ecole Nationale Superieure de Statistiques et d’Economie Appliquée (ENSEA) of Abidjan, teaching assistant at the University of Lausanne, and economist at the Economic and International Relations department of NESTLE in Vevey, Switzerland.

Souleymane is from Cote d'Ivoire, holds a double Ph.D. degree in International Trade and Economic Geography from the University of Paris 1 Pantheon-Sorbonne (France) and the University of Lausanne (Switzerland). His publications and ongoing research deal with the impact of geography on firms’ location, trade flows and regional integration. He was a co-author of 2009 World Development Report "Reshaping Economic Geography", contributed to the 2005 Global Economic Prospect report on regionalism, and has published many papers in peer reviewed journals and three books: “Diversified Urbanization: the Case of Cote d’Ivoire”, (2016), in the World Bank Directions in Development series; “Eurasian Cities: New Realities along the Silk Road”, (2012), in the ECA regional studies series; and “Trade Expansion through Market Connection: the Central Asian markets of Kazakhstan, Kyrgyz Republic, and Tajikistan”, (2011).