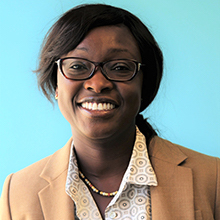 Director of Strategy and Operations, Latin America and Caribbean

Seynabou Sakho is the World Bank Director of Strategy and Operations for Latin America and the Caribbean.

Sakho was most recently the Country Director for Central America (Costa Rica, El Salvador, Guatemala, Honduras, Nicaragua and Panama). In her position, she oversaw the programs and TCs, research and funding of the six nations.

Sakho, who is from Senegal, joined the World Bank in 2004. She has held several positions with the Bank, including as economist for Brazil, Jamaica and Bolivia, economic advisor to the Operations Policy and Country Services Unit, and advisor to the Managing Director’s Office. Most recently, she served as manager of Macroeconomics and Fiscal Management for East and Central Africa.