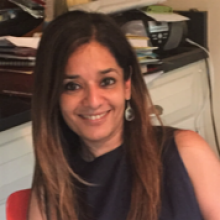 Priya Basu is the Executive Head of the Secretariat for the newly established the Pandemic Fund, hosted by the World Bank. Priya has also been serving as head of the Secretariat for the COVID-19 task force and leading the World Bank’s engagement on pandemic prevention, preparedness and response in global fora, including the G20 and G7 - coordinating across finance and health.

With a career in development finance spanning three decades, Priya brings a depth and breadth of experience in country operations across world regions, resource mobilization, and leading and driving large and complex multi-stakeholder initiatives and agreements at the global level to support global public goods.

Since joining the World Bank Group in 1998 through the Young Professionals Program, Priya has held multiple technical and leadership positions at the World Bank. Prior to her current position, Priya served as Head of Development Finance at the World Bank, helping to formulate IDA20's ambition and policy priorities on crisis preparedness and response. Before that, she served as the inaugural head of the Women Entrepreneurs Finance Initiative (We-Fi), spearheading the vision, strategy, and execution of this global initiative.

In previous roles, Priya managed the World Bank’s $21 billion portfolio of innovative, multi-donor funds to support partnerships to address global commons, such as pandemic threats, climate change, food security and debt relief. Before that, she served as Lead Economist for the South Asia Region, where she and her team reshaped the Bank’s finance and private sector engagement strategy for India and built up a multi-billion-dollar lending and advisory program, with a focus on financial inclusion, investment climate reforms, jobs, and growth.

Priya has also served as economist in the Bank’s Europe and Central Asia Region, working on bank restructuring in Russia, and in East Asia, as a member of the Bank’s financial sector restructuring program for Indonesia in the aftermath of the 1997 East Asian crisis.

Prior to the World Bank, Priya worked in investment banking in London. She also previously worked as an economist at the International Monetary Fund, Asian Development Bank in Manila, and UNCTAD and ILO in Geneva.