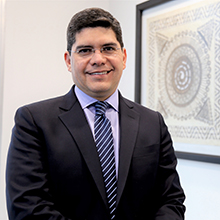 Pablo Saavedra has served as Country Director for Mexico since April 16, 2018.

He is in charge of leading the dialogue between government authorities and World Bank teams in the design and implementation of a joint program to support government efforts at reducing poverty and promoting a sustained and inclusive economic growth.

Saavedra, a Bolivian national, joined the World Bank in 2003 and since then has held several positions of responsibility in various regions and departments at the Bank.

Recently, he served as Manager of the Macroeconomic, Foreign Trade and Investment Department for Latin America at the World Bank. Previously, he was an Economic Advisor at the Policy and Strategy Department and the Bank’s Operations Committee. He was also Sector Leader for Economic Policy and Senior Economist for Poland, Ukraine and Belarus, among other countries.

He has conducted research and worked in reforms with several countries on issues related to economic growth, macroeconomics and fiscal policy, including tax and spending policies and fiscal rules.