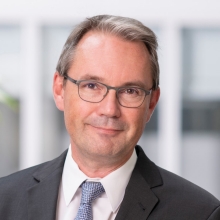 Dr. Michel Rogy is the World Bank’s Digital Development Practice Manager for Africa and the Middle East. In this role, he oversees a portfolio of work aimed at closing the digital divide for client countries and harnessing the potential of digital transformation.

Before joining the Bank in 2011, Michel Rogy was for six years a partner with Paris-based TERA Consultants, an international economic consulting firm, where he advised the European Commission department responsible for creating a single digital market as well as regulatory authorities and operators throughout Europe, the Middle East and Africa on policy, strategic and regulatory issues in the ICT/telecommunications sector. Michel also worked for Neuf Telecom, one of the leading new French telecommunications operators, first as director of interconnection and carrier services and head of regulatory affairs, and later as director of the business customers unit. He started his career as a partner with EUTELIS Consult, an ICT/telecommunications consulting firm based in Ratingen, Germany.

Michel holds a PhD in economics from Telecom ParisTech and a master’s degree in telecommunications from Telecom Bretagne. He speaks English, French, German and some Italian.