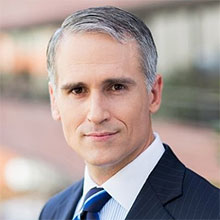 Mark Sigrist is a senior attorney with 16 years’ experience in international finance transactions. Since joining the LEGVPU as Senior Counsel in 2016, Mark has worked on numerous Bank operations, primarily IPF guarantees in support of government obligations in PPPs around the world (including in Argentina and Colombia), as well as other IPF and DPF operations in Francophone and Lusophone Africa.

Before joining the Bank, Mark worked on international project financings in private practice for twelve years, including six months with IDB Invest in 2016, ten years with Chadbourne & Parke LLP (now part of Norton Rose Fulbright LLP), and two years with White & Case LLP. Before becoming a lawyer, Mark worked for the international education nonprofit AMIDEAST for seven years, including four years as its country director in Damascus, Syria. Mark holds a JD in law from the University of Virginia and a BA in International Relations from the College of William & Mary.