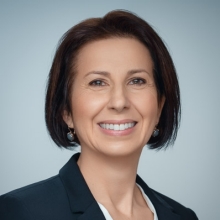 World Bank Special Representative to the UN and the WTO, and Head of the World Bank Geneva Office

Ms. Maria Dimitriadou is the World Bank Special Representative to the UN and the WTO, and Head of the World Bank Geneva Office. She is a Greek National with more than twenty-five years of experience in the World Bank Group (WBG), the European Commission (EC), and the public and private sectors. She joined the WBG in 2015 as Senior International Affairs Officer in the Brussels Office, where she has worked on the WBG's strategic relationship and partnership with the EU and other Brussels-based interlocutors. Prior to that, she worked as a Policy Officer at the Directorate General of Economic and Financial Affairs of the European Commission, where she worked on relations with European and International Financial Institutions, including on promoting the use of innovative financial instruments.

Ms. Dimitriadou has also worked as a Policy Officer and Head of Unit in a Managing Authority of European Territorial Cooperation Programmes implemented under the mandates of EU Member States, Enlargement and Neighborhood countries in the Mediterranean and Adriatic Sea, and as an Economist in the Hellenic Ministry of Finance.

Ms. Dimitriadou started her career in the private sector, where she advised Greek and Western Balkan private and public entities on the design, financing and implementation of investment projects.