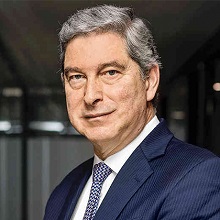 He is a lawyer with specializations in Economic and Financial Law, as well as an LL.M. in International Legal Studies, from American University in Washington DC. Mr. Uribe has held important positions in the public sector of his country, as President of the National Commission for Securities and Market Regulation for two periods and Legal Secretary to the President of the Republic. In the private sector, he performed as President of PROANTIOQUIA, a highly respected foundation backed by entrepreneurs of his natal region. He also served as Acting Judge for the National State Council and Dean of the School of Law and Political Sciences of the Universidad Pontificia Bolivariana de Medellín, his alma mater.

Mr. Uribe has a vast experience in the leadership and operation of Executive Boards of important Colombian corporations, such as ISA, ISAGEN, Grupo de Energía de Bogotá, BAVARIA, Metro de Medellín, as well as of prominent non-governmental organizations, such as Fundación Éxito, Corporación Excelencia en la Justicia, and at the Hospital Pablo Tobón Uribe, among others.

Additionally, Mr. Uribe has taught courses in the fields of economic law and public finances, both at the pre-graduate and post-graduate level, in prestigious Colombian universities such as Universidad de los Andes, Pontificia Universidad Javeriana, Universidad del Rosario, and Universidad Pontificia Bolivariana.