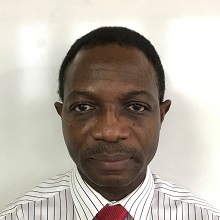 Prior to joining the WBG Board, Mr. Todani was a Senior Economist at the Development and Revenue Mobilization Unit at the World Bank. Previously, Mr. Todani was Senior Advisor to the Executive Director of the IMF Board (2011-2014). He also held a position as Director in the National Treasury of South Africa (2002-2003), and various senior positions at the South African Reserve Bank since 2003, including Head of International Organizations and Special Projects (2015) and Assistant General Manager and Head of Money and Banking Division (2006-2010).